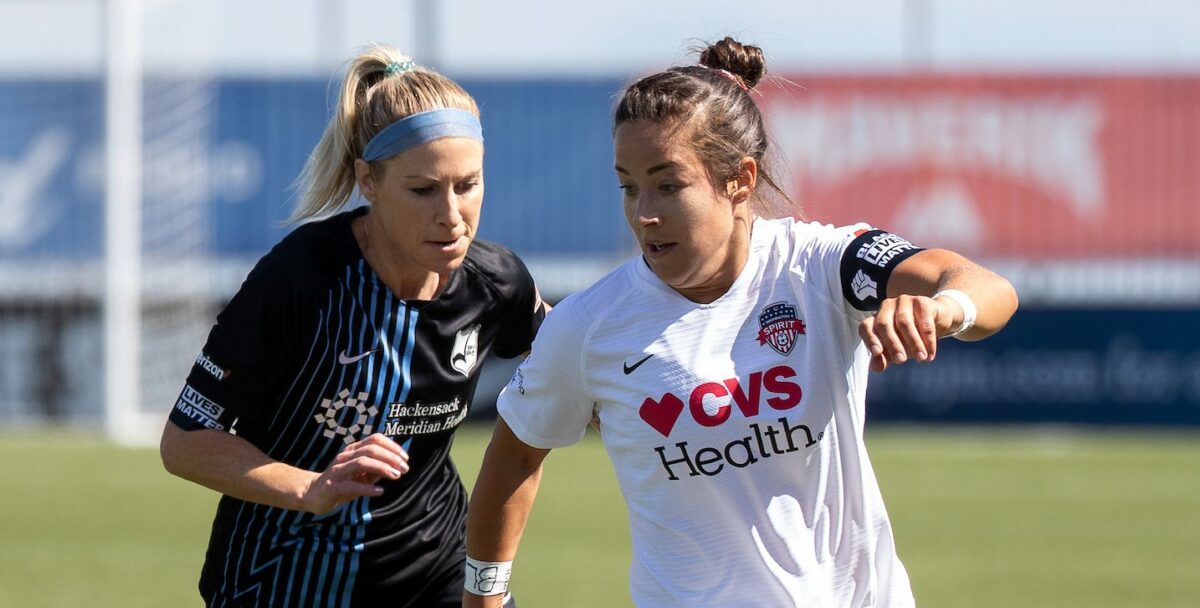 The NWSL Challenge Cup semifinals are now set after a final pair of quarterfinal ties concluded on Saturday.

The No. 2 seed Spirit were knocked out of the competition after Sky Blue goalkeeper Kailen Sheridan saved Bayley Feist’s penalty to end the game. Sheridan’s seven saves in regulation prevented Washington from capitalizing on their opportunities.

Freya Coombe, head coach of Sky Blue, may have feared the worst when her side missed first in the penalty shootout, but the New-Jersey based team experienced good fortune when Washington’s Sam Staab blasted her penalty over the crossbar to keep the score level.

Ifeoma Onumonu had Sky Blue’s best chance of the afternoon when she found herself wide open in the box awaiting a cross, but she only managed to head the ball straight down. The shot bounced harmlessly over the crossbar.

U.S. Women’s National Team star Rose Lavelle played just 30 minutes in the defeat, arising questions of whether Lavelle participating for a full game could have swung the result a different way.

“We had no real choice in the matter,” said Spirit head coach Richie Burke. U.S. Soccer has imposed minutes limits throughout the competition, and Burke was obligated to follow the restrictions for the quarterfinals match.

Questions will arise on whether U.S. Soccer’s decision unfairly influenced the outcome of the match when Lavelle could’ve potentially sparked a goal before penalties.

Sky Blue’s victory comes one day after the No. 1 seed North Carolina Courage lost to the Portland Thorns.

History repeated itself later on Saturday when the Chicago Red Stars defeated OL Reign 4-3 on penalty kicks, booking its place in the next round.

It was another example of the lower seed utilizing penalties to vanquish their foe. In the previous games, expert goalkeeping from Jane Campbell and Sheridan led their teams to the next round. Although Red Stars goalkeeper Alyssa Naeher made several big saves on the night, Reign’s two misses from the penalty spot were self-enforced errors.

Chicago concluded the night without missing a penalty, but the same could not be said for Reign. Shirley Cruz commenced the shootout by skying her effort over the goal, while Lauren Barnes determined Reign’s fate by striking the post with the last penalty of the match.

Chicago had chances to win the game before penalties. Early in the first half Katie Johnson struck the crossbar with a shot from outside the box. Also in the 67th minute, Kealia Watt dribbled and cut by three defenders, but she got the shot all wrong by pulling it wide left of the goal.

Naeher was called upon often to keep the score at 0-0. Reign striker Jodie Taylor was knocking on the door to grab herself a goal throughout the game, and Kristen McNabb sent a missile towards goal in the second half, but Naeher calmly parried shots away seemingly at ease.
Chicago will now face Sky Blue in the semifinals while the Portland Thorns take on the Houston Dash. Both matches will take place on July 22nd at Real Salt Lake’s Rio Tinto Stadium.