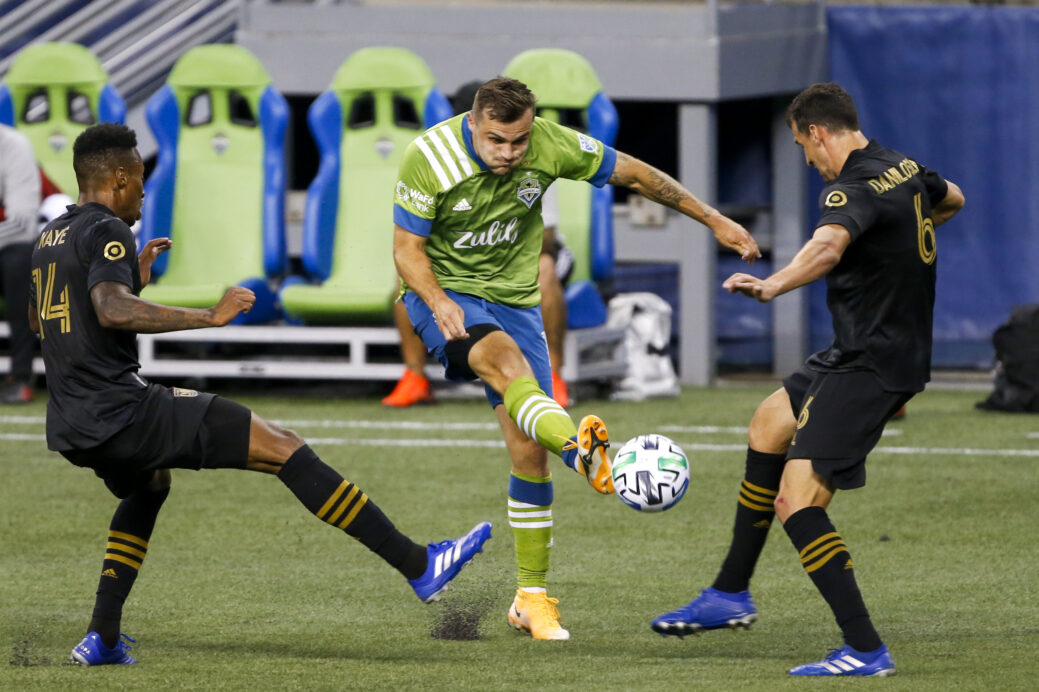 The Seattle Sounders put together three counter-attacking movements in the first 50 minutes of Sunday night’s match against Los Angeles FC. The result? Three shots on target, three goals, and a 3-1 win over the visitors at an empty CenturyLink Field.

The win was a measure of revenge for the Sounders after losing 4-1 to LAFC in the knockout rounds of the MLS is Back tournament. The Sounders (4-1-2, 14 points) are now 2-0 since the return to league play, outscoring LAFC and the Portland Timbers by a combined score of 6-1.

The visitors dominated the first 10 minutes, pinning the Sounders back and forcing goalkeeper Stefan Frei into an early save. But Raul Ruidiaz struck first, staking the Sounders to a 1-0 lead with an audacious first-touch strike from 30 yards out. The Peruvian striker collected a deflected pass, spotted goalkeeper Kenneth Vermeer lurking at the edge of the 6-yard box, and quickly curled a shot into the upper left netting.

Ruidiaz now has three goals in the Sounders’ last two matches, but left at halftime with a heel contusion after colliding with Diego Rossi late in the first half. Sounders head coach Brian Schmetzer characterized the substitution as precautionary in his post-match comments.

Jordan Morris put the match away with a pair of goals in the opening minutes of the second half. In the 48th minute, Nicolas Lodeiro found Morris with a well-timed through ball as the winger split LAFC’s center backs. Morris then easily rounded a charging Vermeer for the 2-0 lead. Just 61 seconds later Joao Paulo picked out Morris with a pinpoint cross to the edge of the 6-yard box to put the Sounders up 3-0. Paulo began the play by forcing a turnover in midfield before working a quick give-and-go with halftime substitute Will Bruin.

Diego Rossi pulled one back for the visitors in the 60th minute, tracking down a rolling cross from Jose Cifuentes and easily beating Frei at the far post.

Jordan Morris. He continues on the tear that began after the 2019 Gold Cup. A brace that put the match to bed was far from the only contribution for the 25-year-old Stanford product: Morris looked dangerous throughout and provided energetic defensive help when the Sounders found themselves under pressure in the first half.

Goals always change games, but the bit of magic Ruidiaz conjured from thin air in the 11th minute changed the entire tenor of the match, settling down a Sounders’ side that looked poised to unravel.

Kenneth Vermeer. Ruidiaz caught LAFC’s goalkeeper sleeping off his line on the Sounders’ first goal. Vermeer then charged prematurely on the Sounders’ second goal, finding himself easily rounded at the edge of the penalty area.