From Miami Fusion to Inter Miami: MLS set to return to South Florida after two decades away

All of that might aptly describe Inter Miami right now, but it also offers up a fitting profile of the last team to represent Major League Soccer in South Florida: the Miami Fusion.

Inter Miami will at long last play a game in its new venue on Saturday night against Orlando City, and this edition of the Sunshine Clasico will be special for more than just serving as the expansion team’s home opener. The game will also officially mark the return of first-division soccer to the Miami market, ending a lengthy hiatus that has stretched to almost 19 years.

The last time an official MLS match was held in the area was on Oct. 17, 2001, and that day it was the Fusion that took the field representing Miami. What happened in the weeks and month that followed left the soccer-crazed city without an MLS team.

Nearly two decades have passed since then and the memories of that Fusion side have naturally fallen further into the background, but what exactly was that last MLS Miami team like and what if anything can Inter Miami learn from the successes and failures of its predecessor?

SBI spoke to several members of that 2001 Fusion team to take a closer look:

The Fusion are known for being one of the two clubs that MLS contracted after that 2001 season, making them synonymous with failure, but the Fusion team that year was actually very successful on the field.

In that campaign, the Fusion not only won the Supporters’ Shield with a roster loaded with quality, but they also came a game away from reaching the MLS Cup Final.

“You could have probably fielded a starting team with just the substitutes,” former Fusion goalkeeper Jeff Cassar told SBI. “There was just talent all over the place and when you watched that team play, it was special. It was beautiful soccer. It was beautiful collectively, it was beautiful individually.”

Led by fiery head coach Ray Hudson and boasting a blend of hungry youth and driven veterans, the Fusion won early and often that season. They also scored a league-high 57 goals while playing a proactive and aggressive style that both fans and players enjoyed.

Of course, if there was fun on the field, it should probably go without saying that there was plenty off it as well.

This is South Florida we’re talking about, after all.

“I remember the great times after a game or even after a practice,” former Fusion goalkeeper Nick Rimando told SBI. “Going to Hooters because we had discount cards. There was a place called the Tudor Inn that was right there, too, that was this little pub right next to the stadium and we would go there for fish and chips and beers after a training session.

“Sometimes there were some players that stayed there all night and came straight to training in the morning the next day. It was a good group of guys with character.” 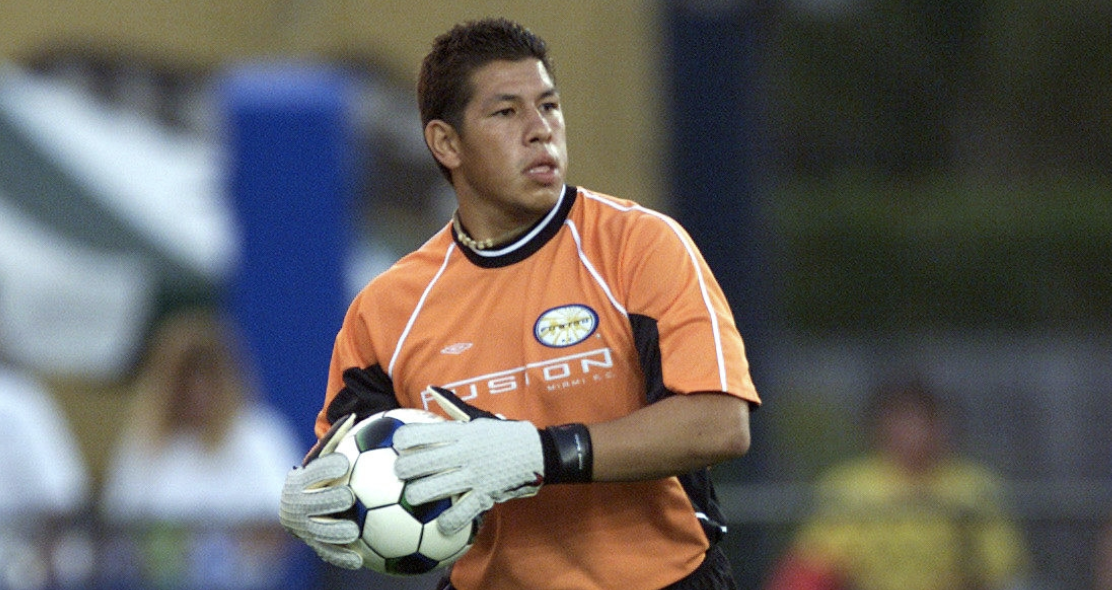 “There was just like this group of degenerate heathens that were such unbelievable soccer players,” former Fusion defender Brian Dunseth told SBI.

Some of the squad may have indulged in the entertainment and nightlife options that the Miami area notoriously has to offer — and “the fun” that was had is certainly a recurring theme mentioned by the retired players — but what helped make the Fusion so special in 2001 was the players’ ability to quickly flip a switch and focus on the task at hand.

A cutthroat but nurturing culture existed on the day-to-day in both practice and games — one that allowed players to grow and thrive, to battle and bond.

“Everything was fun and games but the moment you started warming up, all of a sudden this environment was incredible,” said Dunseth. “Everybody wanted to play and everybody had each other’s backs, but everybody was super competitive to get in the starting eleven.

“I still think that Miami Fusion team should match up in the conversation of, ‘Hey, let’s talk about some of the best teams all time.” 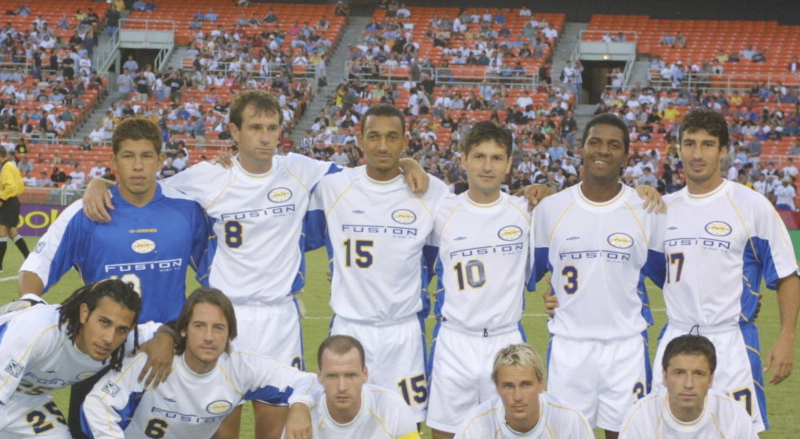 There may have been plenty of good times on and off the field for the Fusion during the course of the 2001 season, but there was also an air of uncertainty about the future.

Whispers about the Fusion potentially folding were there practically from the beginning of the year and signs followed. One player was advised by another club’s owner to rent and not buy property in South Florida. Others heard team trainers talking about counting how many of bags of ice and rolls of tape were used.

Then there were the unenviable infrastructure situations. The Fusion practiced at the spring training stadium of MLB’s Baltimore Orioles, and played home games at Lockhart Stadium next door only after reaching a deal with the local school board. Clearly, the Fusion were on shaky ground.

“There were a lot of rumors of the team not playing in 2002,” former Fusion defender Carlos Llamosa told SBI. “…As an organization, the team was not the best at that point.” 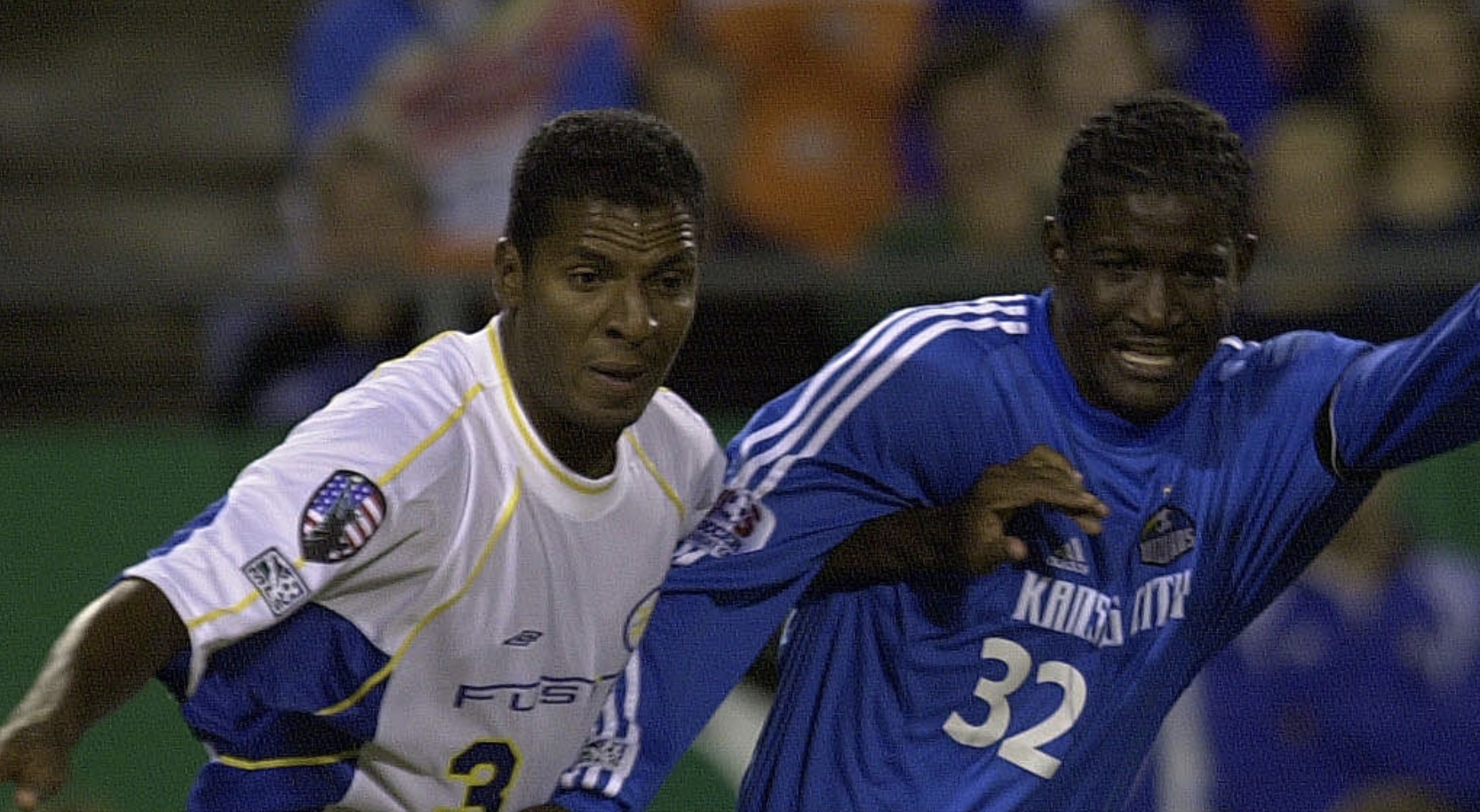 The hearsay may have persisted, but the Fusion did not allow that to distract them from the task at hand. In fact, they eventually rallied around the idea that they were being set up to be contracted by outside forces.

“We kind of decided to have this ‘F— you’ mentality,” said Dunseth. “On the whiteboard right before we went out on the field, it would literally say, ‘F— them.’ That was the mantra every time we stepped on the field. It was like, ‘I don’t care who we’re playing against. We’re going to go out and kill them.'”

The strong desire to prove they belonged combined with the team’s skill allowed the Fusion to reach the semifinals of the postseason. They ultimately fell a step short of reaching the MLS Cup Final, conceding a painful golden goal in extra time of the decisive third match of a three-game series vs. the San Jose Earthquakes that October night.

The Fusion were removed from the league shortly thereafter and just like that Miami lost its team, a development several of the ex-players think might not have come to pass had they been able to win the trophy that year.

“I think it would have brought up some challenging questions,” former Fusion midfielder Chris Henderson told SBI. “Maybe somebody could have come in and saved it. … I think there would have been a possibility of some solutions, but that’s just me thinking as a player.” 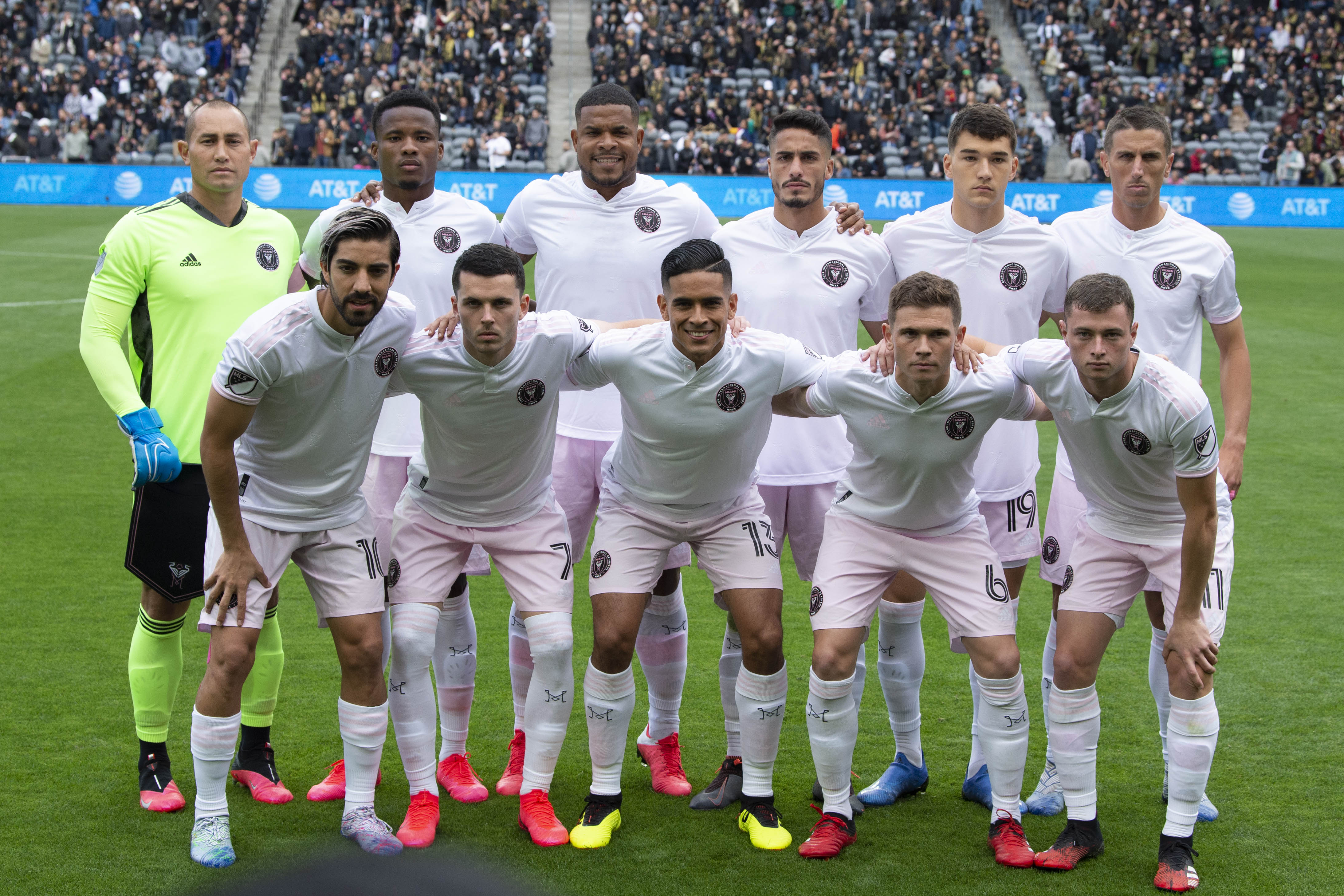 For much of the last 19 years, Miami and the larger South Florida market have essentially been an MLS burial ground. Some college combines were held in the area for a period of time and a few teams occasionally visited for preseason. Still, local interest in the league was largely nonexistent.

All it took was a global icon to change that.

David Beckham has made good on his 2014 announcement that he would bring an MLS team back to Miami as one of its owners. Inter Miami began play at long last earlier this year with a group that — similar to the Fusion — plays in Fort Lauderdale and boasts a mix of promising youngsters, wily veterans, Latinos, Americans, and more.

The results have not been there at the start, but there is plenty of optimism from the former Fusion players that Inter Miami will ultimately succeed where their club failed.

“Everything is much better from top to bottom,” said Llamosa. “Back then, we only had one investor who was a businessman and not much of a soccer man. This time you have a little bit of everything. You have businessmen, you have a soccer guy who is an investor as well like David Beckham.

“It’s different starting from that point and then there’s the stadium, the training facility.”

While the ex-Fusion players are mostly positive about Major League Soccer’s chances of making it work in Miami this time around, some of them do have questions. For instance, can Inter Miami keep fans interested in driving to Fort Lauderdale for games until the team’s planned stadium in Miami proper is given the green light and built?

“If they don’t have that, then it will bring up some questions of having the stadium back in Fort Lauderdale,” said Rimando. “Because we saw it wasn’t great in the beginning when we had MLS there before.”

Another question some of the former Fusion players have is whether Inter Miami will be able to deliver the type of attacking brand of soccer that has been talked about plenty by the new club. After all, South Florida is known for being a demanding sports market. 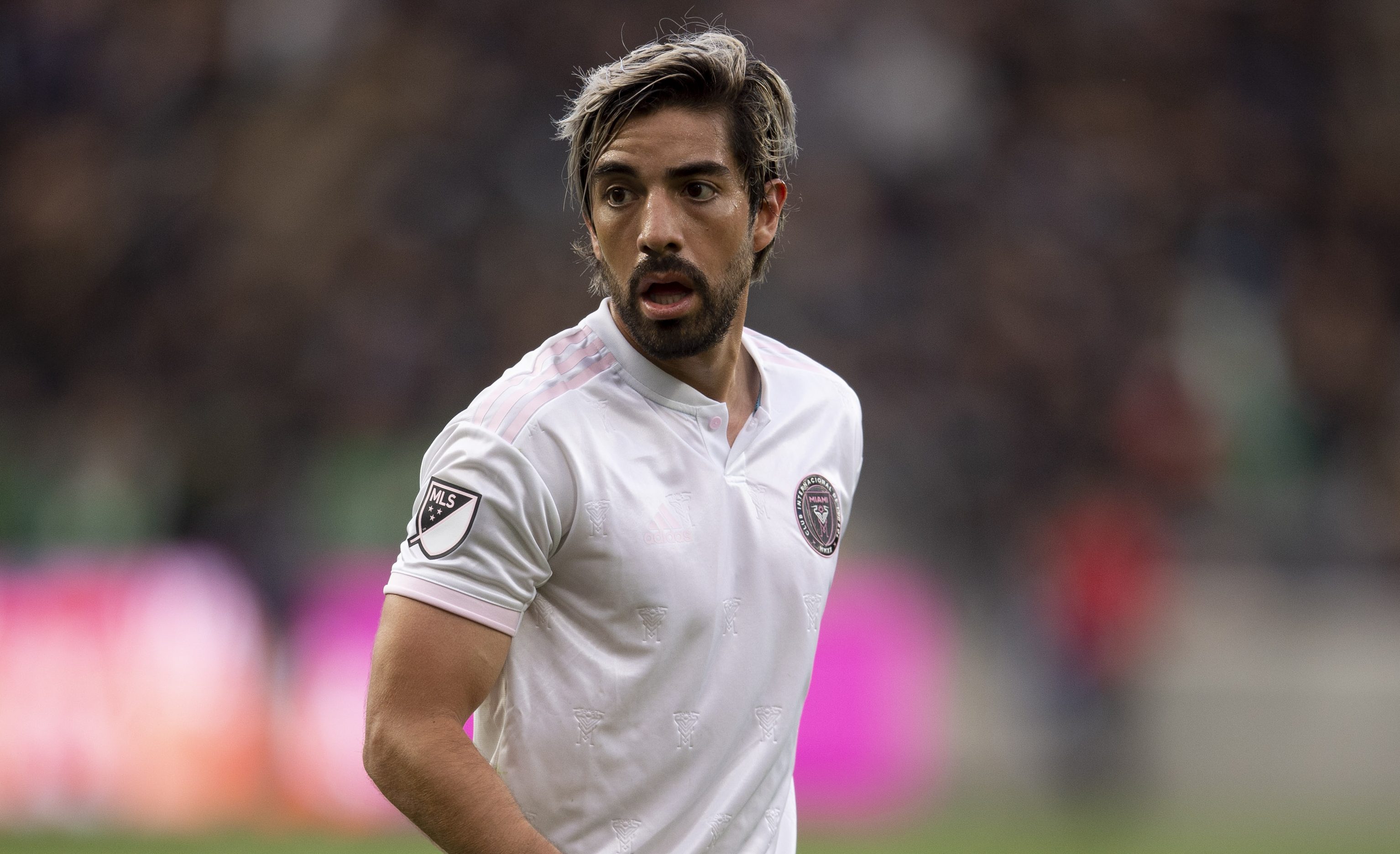 There are other questions, such as whether Inter Miami needs to sign a superstar player to really grab a firm hold of the soccer-savvy market, but the good thing for the franchise is that it is still in the beginning phase of its existence.

“There’s a lot of similarities to what we had with the Miami Fusion,” said Henderson. “The team is called Miami, but is playing and training in Fort Lauderdale. That’s something to get used for the people there who were kind of excited to have the team in Miami.

“But I think MLS 2020 is a different world compared to MLS 2001, so I think in the long haul this is going to be a fantastic club.”