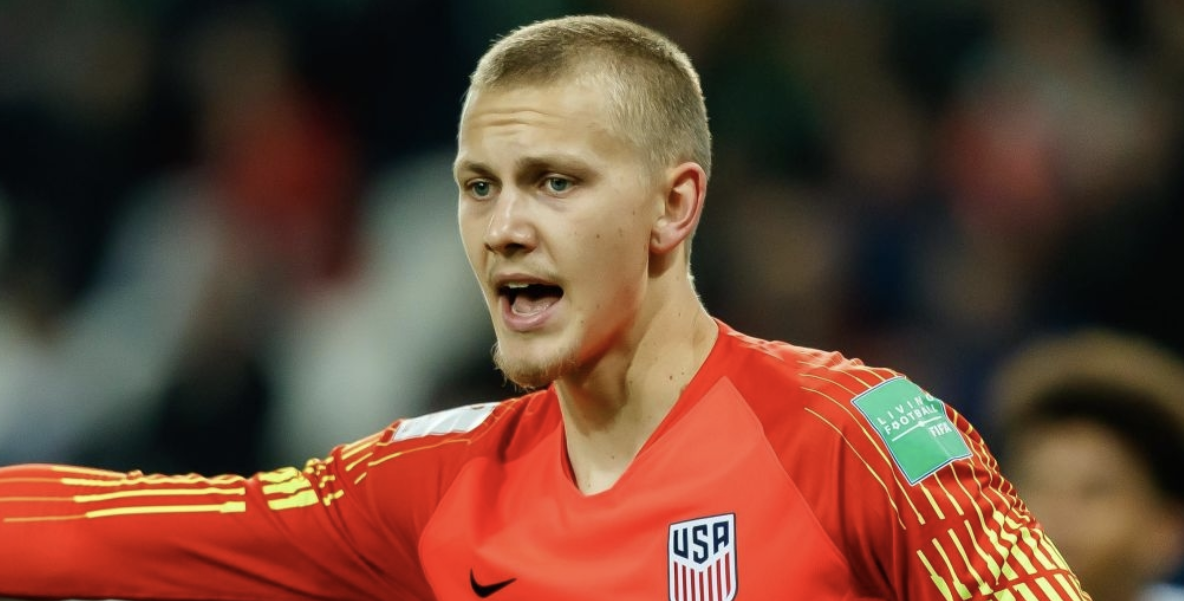 Nashville SC added a young talented goalkeeper to the mix, one that has U.S. Youth National Team experience under his belt.

Brady Scott signed with the Western Conference club on Monday after spending the last three years with German side FC Cologne. The 21-year-old  will be available for selection when Nashville SC continues regular season play this weekend against Atlanta United.

“Brady is an outstanding young goalkeeper who’s been a standout as a U.S. Youth International,” Nashville SC General Manager Mike Jacobs said. “Coupled with his practical experience abroad the past couple of years, we are excited to see him take the next step in his development in MLS here in Nashville.”

Scott made 29 appearances in net for FC Cologne II after signing in July 2017. He recorded five shutouts, but never made his senior debut for the Bundesliga club.

At the youth international level, Scott was the starting keeper for the U.S. Under-20 team that won the CONCACAF World Cup Qualifying Tournament in 2018. Scott also claimed the Golden Glove as the best goalkeeper at the Concacaf Under-20 Championship.

He will compete with Joe Willis for the No. 1 job in Nashville.

Lutz Pfannenstiel was announced as the expansion side’s Sporting Director ahead of the club’s debut in MLS in 2023. He will be responsible for all on-field operations for the club, which includes recruiting coaches, hiring staff, identifying and signing players, and creating and developing a youth academy.

Pfannenstiel played 20 years as a goalkeeper, featuring in all six FIFA membership associations. After retiring from playing in 2011, the 44-year-old went into coaching as well as into a front office role. He served as an assistant coach with the Cuban National Team as well as Namibia.

The German also served as a scout and head of international relations for Bundesliga club Hoffenheim from 2011-18′ before moving to Fortuna Dusseldorf as managing director of sports. He left Dusseldorf at the end of the club’s recent season, which ended in relegation to the 2. Bundesliga.

The New England Revolution added a pair of veteran players to its roster for the upcoming league restart.

Bruce Arena’s side acquired forward Kekuta Manneh in a trade with FC Cincinnati on Monday. In exchange, FC Cincy received a 2020 international roster slot, which will return to New England on Jan. 1, 2021.

“Kekuta is a player I’ve known for a number of years who can play a number of attacking positions, possesses good speed and quickness, and also has a solid goal scoring record in our league,” Arena said. “I’m hopeful he can adjust quickly to our club and help strengthen our roster as we prepare for the last 18 games of the regular season.”

Manneh joins the Revolution with seven seasons of MLS experience under his belt. The 25-year-old winger has made over 140 regular season MLS appearances, scoring 30 goals and adding18 assists. He joined FC Cincy ahead of the 2019 season and since has made 29 appearances over the last two seasons.

Columbus Crew head coach Caleb Porter will have another experienced midfielder to call upon in the coming weeks.

The Eastern Conference club announced the acquisition of midfielder Fatai Alashe after a trade with FC Cincinnati. FC Cincy received a second round draft pick in the 2021 MLS SuperDraft, but should Alashe meet certain performance conditions, the club would instead receive $50,000 of General Allocation Money (GAM) for the 2021 MLS season from the Crew.

Alashe, 26, is a six-year MLS veteran who has made 99 regular-season appearances to date. He joined FC Cincinnati ahead of the 2018 MLS season and went on to score one goal in 14 appearances. Alashe is a former first round draft pick by the San Jose Earthquakes back in 2015.

“We would like to welcome Fatai Alashe to Columbus Crew SC,” Crew SC President and General Manager Tim Bezbatchenko said. “Fatai brings a half a dozen years of experience in MLS at just 26 and we believe he is a player who will help increase our depth in the center of the pitch and will add to the competition at the central midfield position. We are excited to incorporate him into the team and look forward to seeing his contributions as we prepare for the continuance of the MLS regular season this week.”

The Crew takes on the Chicago Fire on Thursday in its first league match back following the MLS is Back Tournament.

A pair of midfielders will be playing for new clubs in the second half of the MLS season following an interconference trade on Monday.

The Houston Dynamo acquired Wilfried Zahibo from the New England Revolution, as well as a 2020 international roster spot. In exchange, the Revolution received Tommy McNamara, $150,000 of General Allocation Money (GAM) in 2020 and $25,000 of GAM in 2021.

Zahibo played in 58 combined matches for the Revolution, scoring five goals and contributing five assists. The 26-year-old Frenchman was also named to the 2018 MLS-All Star Game roster and will occupy the international roster spot acquired by Houston this season.

“As we prepare for the restart of the season we are pleased to add Wilfried to our roster to strengthen our midfield,” said Dynamo Senior Vice President and General Manager Matt Jordan. “We are confident that his physical presence, ability to cover ground, and quality on the ball will create a healthy competition within our group.”

McNamara, 29, is currently in his seventh MLS season was in his second with the Dynamo. He’s also played for NYCFC in his MLS career and has totaled 129 appearances with 16 goals scored and 17 assists to date.

“We are pleased to acquire Tommy McNamara as a member of the New England Revolution. I’d also like to thank Wilfried Zahibo for his contributions to our club and wish him the very best with the Houston Dynamo,” Arena said. “Tommy is a veteran player in our league who can play in a number of positions in the midfield. He is an intelligent player who will add a different dimension to our roster, and we look forward to welcoming him to the Revolution.”

The Houston Dynamo’s busy day got even busier with the addition of Ariel Lassiter.

Lassiter joined on loan through the 2020 season with an option to exercise a permanent transfer from Costa Rican side LD Alajuelense. The L.A. Galaxy also received have acquired $50,000 in General Allocation Money (GAM) from the Dynamo in exchange for Lassiter’s MLS rights. The Galaxy could receive up to an additional $100,000 in GAM if Lassiter meets certain performance-based metrics with the Dynamo.

“We are very pleased to add Ariel Lassiter to the Houston Dynamo roster and we’d like to welcome him to the club. It’s been a priority of ours to add a naturally left footed winger during this transfer window. We are confident given Ariel’s age, speed and ability to score goals and create chances that he’ll be a good fit for our system of play,” said Dynamo Senior Vice President and General Manager Matt Jordan. “Ariel is familiar with our league which will help in his transition, while strengthening our already talented group of attacking players right away.”

The 25-year-old totaled 24 goals and 16 assists in 64 games for LD Alajuelense over the last two seasons in Costa Rica. He scored one goal in 26 combined league appearances for the Galaxy from 2015-18’s.

LAFC acquired the top spot in the MLS Waiver Order last week and put it to use on Monday.

Traore arrived at Montverde as a 14-year-old, and helped the school to a 21-4-1 record in 2019 as a senior. The central defender registered seven assists that season and also appeared with Senegal’s Under-17 Boys National Team in the same year.

“Mohamed is an exciting, young player with a lot of potential,” LAFC EVP of Soccer Operations & General Manager John Thorrington said. “We believe getting him in our environment will help him continue to grow and develop and prepare him for success at this level.”

The Philadelphia Union continued its trend of developing young talent by rewarding midfielder Jack McGlynn with a Homegrown contract.

McGlynn, a 17-year-old central midfielder, signed the deal on Monday which takes effect on Jan. 1st, 2021. He becomes the 14th Homegrown player in Union history, following in the footsteps of current first team players Brenden Aaronson and Mark McKenzie.

“We are excited to welcome Jack to the First Team,” said Union Sporting Director Ernst Tanner said. “After signing with Union II, he has continued to impress the technical staff with his development after making an early impact with our USL team. His ability to play across the midfield and his capacity to process new information and put it in to action on the pitch at a young age shows how high his ceiling can be.”

McGlynn joins the club after his time at the Union Academy and a great start to his pro career with USL affiliate Philadelphia Union II. He has totaled one goal and one assist in just under 400 minutes of action with Union II this season, starting four of six matches in 2020. He will remain with Union II for the remainder of the 2020 season.

The Vancouver Whitecaps made its 23rd Homegrown signing of the club’s history on Monday.

Goalkeeper Isaac Boehmer signed a one-year deal from the Whitecaps FC Academy, which also comes with options to extend the contract for future seasons. The 18-year-old has made 14 starts over two seasons in the U.S. Soccer Development Academy league.

“This means everything to me,” said Boehmer. “I’m very thankful to all the people who have helped me along the way, especially my family. Starting at a young age with the ‘Caps, we drove five hours to training sessions on Friday nights and five hours back. I’m going to continue to work hard, grow as a player here in Vancouver and most importantly help the team.”

The product of Okanagan Falls, British Columbia was selected to join the ‘Caps MLS Academy in September of 2018. He also previously enjoyed a training sting with Bundesliga club Schalke.