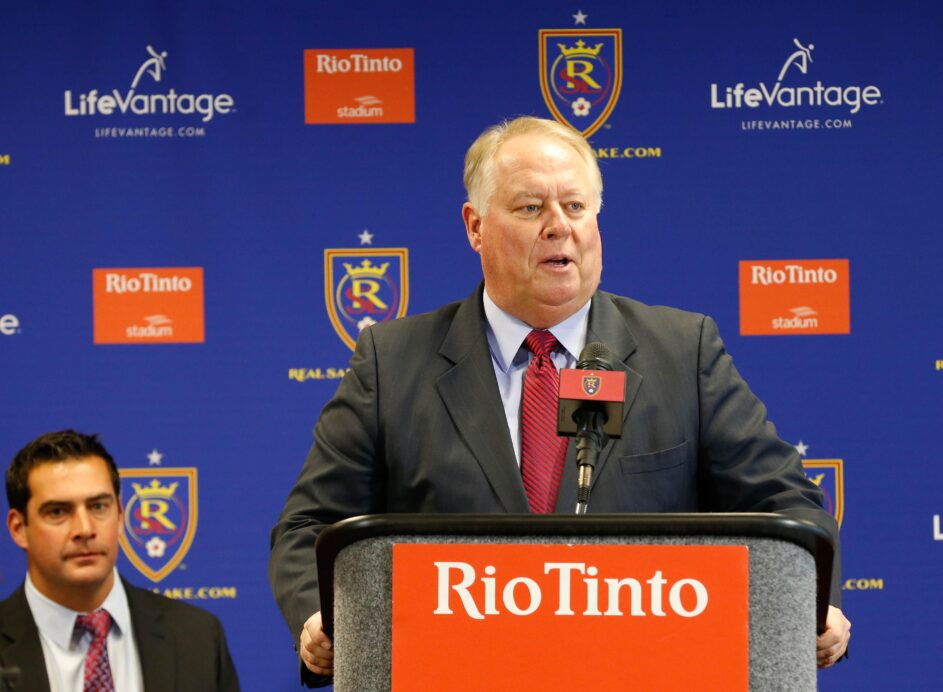 Real Salt Lake owner Dell Loy Hansen has come under fire for critical comment aimed at MLS players for their decision to protest matches on Wednesday, which led to the postponement of five of the six matches scheduled.

The protests were part of a sweeping movement across the sports world on Wednesday which saw the NBA postpone playoff matches and Major League Baseball postpone games as players joined together to protest racial injustice after police in Kenosha, Wisconsin shot Jacob Blake.

That movement included Real Salt Lake’s scheduled match with Los Angeles FC, a match that was set to be played with fans in attendance. The decision by players not to play enraged Hansen, who went on a rant on Thursday criticizing the protest, and even going so far as to say he would be cutting jobs due to the protests.

“We will not be inviting fans back to the stadium in the future, so tomorrow … I start cutting 40 to 50 jobs again,” Hansen said. “We would not go through the risk of inviting people back to have that kind of an outcome.”

“It’s taken a lot of wind out of my sails, what effort I want to put into recruiting players and building a great team. It just seems that’s not a very good path to take.”

Hansen was clearly upset that RSL players took part in the decision not to play on Wednesday, and his choice of words to illustrate that belief were less than ideal.

“It’s a moment of sadness,” Hansen said. “It’s like someone stabbed you and then you’re trying to figure out a way to pull the knife out and move forward. That’s what it feels like. The disrespect was profound to me personally.”

Hansen’s comments led to immediate condemnation, both from within the American soccer community and from other parts of the sports world, and included NBA star Donovan Mitchell, who joined USMNT forward Jozy Altidore in calling for Mitchell to sell the team.

WOW… if it’s taken “the wind” out then sell the team… I stand with @realsaltlake players ✊🏾💯 https://t.co/Xym06Lpy8n

I appreciate Dell Loy Hansen’s efforts to build the sport of soccer in Utah.  His commitment to MLS, the NWSL and the USL, as well as the game at the youth level, has been significant.  However, I strongly disagree with the comments he made today, the way they were expressed, and they do not reflect the views of MLS.

This is a time for all of us to work together in the pursuit of racial equality and social justice.  Major League Soccer and all of its clubs will continue to support and create initiatives that enact real change.

Real Salt Lake defender Nedum Onuoha made it clear he doesn’t want to play for RSL anymore under Hansen as owner.

“I don’t want to be here because I’m not here to play for someone who isn’t here to support us,” Onuoha said in an interview with BBC Sport. “We are trying to create a bigger conversation but a lot of the people who are in power don’t empathize or sympathize or do anything. They are more concerned with themselves.

“It didn’t feel right to be playing a game when people are trying to highlight a big conversation and things that are bigger than sport. I was brought to tears this morning as I was listening to stories of what has happened over the last few days and knowing the owner isn’t in agreement and now seeing this stuff here.”

Hansen took part in another interview later on Thursday, after the backlash for his initial comments, and he tried walking back some of his earlier statements while apologizing for any perception that he didn’t support the Black Lives Matter movement.

“I saw the man in the stands, not the overall movement in sports to say, ’Enough is enough and it’s way beyond enough,” Hansen said on a radio show on a radio station he owns. “Probably in the moment I didn’t feel that message. As I studied it, I get the message.”

The aftermath of Hansen’s comments only became worse after an article by The Athletic detailed multiple incidents involving Hansen that were either racist or otherwise inappropriate, incidents that are sure to leave MLS officials considering his future as an owner.

MLS has the authority to remove an owner if two thirds of the leagues other owners vote to remove, and given the fallout from Hansen’s remarks, and everything emerging in the aftermath, there is a very real possibility that Hansen could wind up being forced out of MLS.