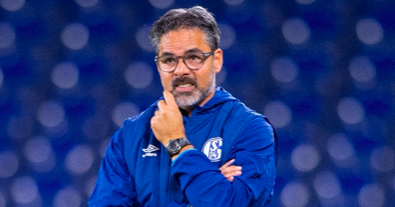 David Wagner’s time at Schalke is over.

The German-American manager was sacked as manager of the Bundesliga side on Sunday after a poor start to the new league season. Wagner was in his second season as boss of Schalke, but will now be in search of a new job.

“We all had hoped that we could turn things around in sporting terms together with David Wagner,” Schalke sporting director Jochen Schneider said. “Unfortunately, the first two game days of the new season did not produce the necessary performance and results.”

“We have therefore decided to take the path of a new start in terms of personnel. Despite the disappointing results, this decision was anything but easy for us. My thanks go to David Wagner, Christoph Bühler and Frank Fröhling, who did everything every day until they were released to get Schalke 04 back on the road to success.”

Wagner took over at Schalke in July 2019 and was lucky to make it this far as manager after a poor end to last season. Schalke missed out on European qualification after winning only one league match in 2020 and two matches overall in all competitions.

The club ended the season on a 15-match winless run before opening this season with lopsided defeats to Bayern Munich and Werder Bremen.

Wagner, who won eight caps for the U.S. Men’s National Team as a player, also served as manager of Huddersfield Town from 2015-19 and head coach of Borussia Dortmund II from 2011-15. Wagner worked with current USMNT stars Christian Pulisic at Dortmund and Weston McKennie at Schalke.

Schalke next travels to RB Leipzig in Bundesliga action on Oct. 3rd, looking for its first league win since Jan. 17th.