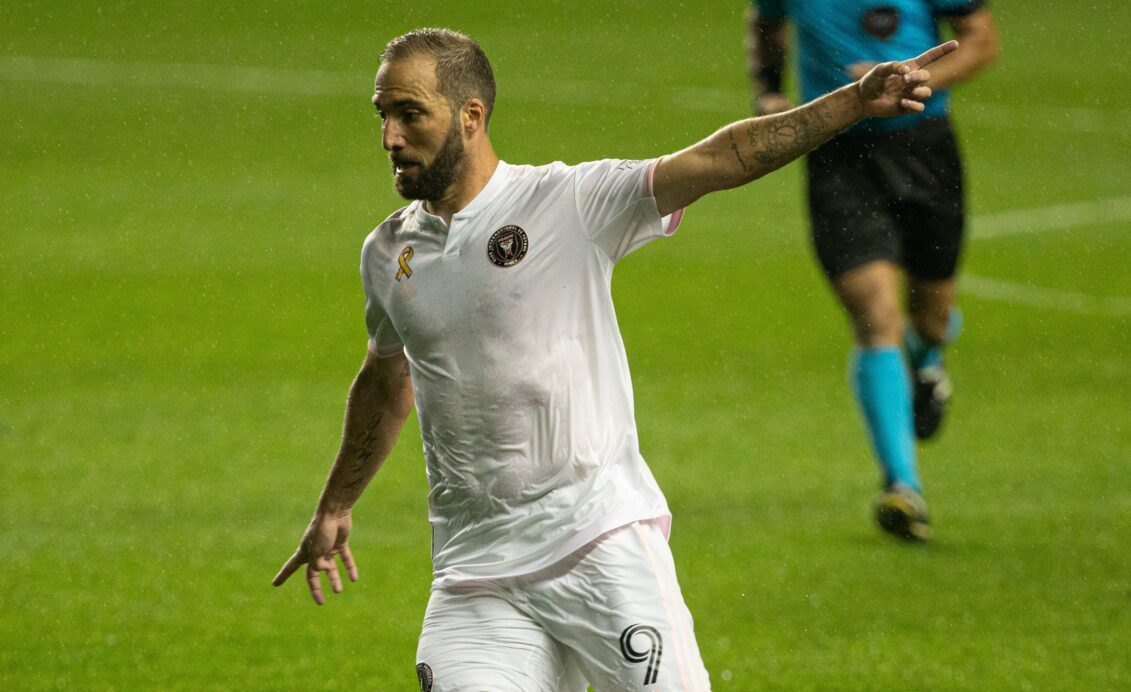 The penalty kick will be what is most talked about, but Gonzalo Higuain showed promise in his Inter Miami debut all the same.

Higuain made his first start and appearance for Inter Miami in a 3-0 loss to the Philadelphia Union on Sunday night, and he showed well aside from his spot kick mishap. Yes, a striker of his caliber should have done better than to fire the ball into the stands in the 77th minute on a play that could have brought Inter Miami back into the game. Still, his overall returns were a net positive.

Be it with his ability to open play with to the flanks with his vision or knack for creating shots, Higuain showed his quality and the type that the expansion side has been missing up front for much of this year. The Argentine was involved in many of the team’s best scoring chances, including an impressive overhead kick in the 20th minute, and on another night probably would have converted one.

It must be noted that Higuain faded as the game wore on and his legs got heavier. Nonetheless, that he was able to show so many good things from the run of play in his first match at club level since Aug. 7 is a major positive Inter Miami can take from this one.

Especially since the Designated Player only figures to get better as he regains his top fitness levels and learns more how to play with his new teammates.

While one former Juventus player showed mostly positive signs for Inter Miami on Wednesday, another delivered yet his latest subpar showing in midfield.

Blaise Matuidi had his latest mediocre outing in the center of the park in the lopsided defeat. It was not that the Frenchman was bad, but he just was not that good and did not take control of the game in the way that you might expect of a player of his caliber.

What’s more, Matuidi left a lot to be desired from an effort standpoint on the Union’s second goal in the 69th minute. He trotted back leisurely as the play began to unfold, and his absence helped create a domino effect that unlocked Inter Miami’s defense.

The buildup by 4⃣ @PhilaUnion players! 👌

Matuidi did have some nice forward passes vs. the Union and he astutely took a quick free kick in the second half that generated one of Inter Miami’s best chances in the match. That said, you expect more from a player with his quality and experience and right now he is not delivering that consistently enough. Sunday’s loss was just the lates reminder.

When head coach Diego Alonso goes back and watches the film, it will probably drive him crazy that all three goals conceded originated from throw-ins in Inter Miami’s half.

All of the Union’s tallies in the monsoon that was Sunday night’s game were born off of plays that began with throws. Errors like that can and do happen occasionally, but once is a mistake, twice is a coincidence, and thrice is a pattern. Even more so when they all come in the same game.

The first goal came when Victor Ulloa failed to collect Nicolas Figal’s restart and floated a poor pass up the field that came back the other way. The second happened after a lob from the left was not played cleanly, allowing the Union to win possession on the wing. The third came via a weak throw that ultimately resulted in Dylan Nealis getting caught on the ball as he tried to figure out what to do it.

There are lots areas for Alonso to address this week, but it’s a bit mind-boggling and juvenile that throw-ins are going to have to be one of them.

Luis Robles (5.5) — Made a pair of big stops on either side of halftime, but had to pick the ball out of his net three times all the same.

Nicolas Figal (5) — The decision to race out of position to challenge for the ball on the second goal was costly. Hit the nice cross on Higuain’s overhead attempt.

Andres Reyes (5.5) — Defensively solid after committing an early foul that earned him a yellow. Left the game with a head injury in the 68th minute.

Leandro Gonzalez Pirez (5) — Caught ball-watching instead of marking Ilsinho on the Union’s first insurance goal, but had a few good interventions.

Ben Sweat (4) — Might have been the biggest scoring threat after Higuain, with two decent attempts and one that forced Andre Blake into a big save. Directly involved in two of the conceded goals, however.

Victor Ulloa (4) — His ill-advised aerial pass up the middle helped give the Union the lead, and masked some of the good defensive work he put in.

Blaise Matuidi (5) — Another so-so showing. Passed well but failed to show the requisite urgency needed to track back on the Union’s second tally.

Lewis Morgan (4.5) — Struggled to win many battles on his flank and didn’t have many dangerous crosses. His set-piece delivery was a tad better.

Rodolfo Pizarro (5.5) — Was not his sharpest match and he drifted in and out of the game, especially when he got moved out of the middle and over to the left.

Juan Agudelo (5) — Did not make much of an impact, be it out on the left or up top, before coming out with a hamstring injury at halftime.

Gonzalo Higuain (5.5) — A shambolic penalty he should have done better with overshadowed what was largely a positive debut showing from him.

Robbie Robinson (4.5) — Pressed well in moments but was largely invisible in the attack during his 45 minutes, finishing with a team-low 10 touches.

Dylan Nealis (4) — Directly at fault on the last goal for dawdling and a bit too passive on the second.

Wil Trapp (6) — Knocked the ball around precisely with a range of passes, and might just have made a case for more minutes and maybe even a start.

Diego Alonso (4.5) — Changed the formation and tactics midway through the first half to some level of success, but overall this was another disjointed showing from the team.