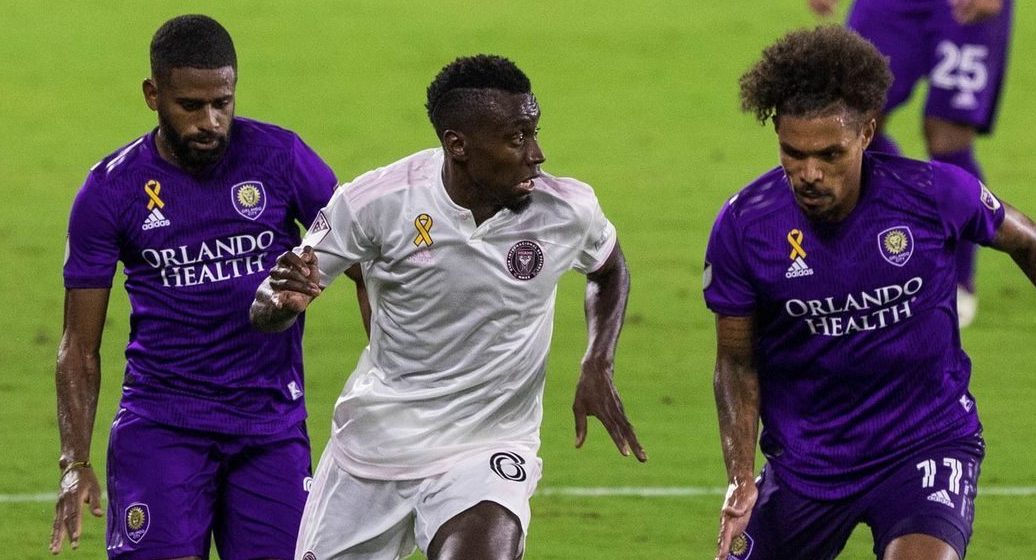 ORLANDO, Fla. — It is no secret by now that Inter Miami’s game plan revolves largely around getting down the wings and whipping in a healthy dose of crosses.

Which is why losing left back Ben Sweat so early hurt so much on Saturday.

Inter Miami fell for the seventh time in 2020 via a 2-1 road defeat to rivals Orlando City, and a big factor in how the match played out was Sweat’s early departure. Not having Sweat — who has been one of Inter Miami’s best players in Phase 1 of the MLS regular season restart — since the third minute because he collided heads with teammate Leandro Gonzalez Pirez robbed Inter Miami of the type of width it likes to play with.

Without Sweat providing those overlapping runs down the flank, left midfielder Juan Agudelo became a non-factor as he had to play a more tactical game that limited his impact. Combine that with right back Nicolas Figal not being a true fullback that can maraud up and down the wings as effectively, and Inter Miami became very narrow and easy to defend against because only Lewis Morgan was a true threat in those wide spots.

Alonso’s decisions to bring on Dylan Nealis and Brek Shea as wingbacks and move to a 3-5-2 formation to provide more width and the style of play the manager seeks worked wonders. Both Nealis and Shea especially opened the field, which allowed Inter Miami to better pass the ball around the park and really begin to test Orlando City with crosses.

Of course, the improved second half was ultimately not enough. Still, it showed yet again just how important width and crosses are to Inter Miami under Alonso.

As was just mentioned, Shea made a major impact for Inter Miami during the closing 45 minutes. It was not just that he provided more width and crosses in his latest substitute cameo, but also that Shea scored a well-taken equalizer in the 65th minute.

The goal was Shea’s first since April 7, 2018, and he almost bagged another later in the second half but was denied superbly by Orlando City goalkeeper Pedro Gallese.

“I think he came into the game very well and he’s done this on several opportunities,” said Alonso of Shea on Saturday night.

Don't think it was really audible on the local broadcast in South Florida last night, but Brek Shea was hit with a chorus of boos every time he touched the ball AFTER his goal. ⚽️

The reason? His taunting celebration in front of the Orlando City supporters.#InterMiamICF pic.twitter.com/E6FNWCnq5g

The 30-year-old Shea, who played in every match for Inter Miami in Phase 1, has both started and subbed into games in recent weeks. He has performed better, though, when coming in off the bench, which might just be a perfect role for him right now.

Shea is still trying to get back to 100 percent sharpness after his devastating knee injury last year, and the super sub role should allow him to continue to work his way back slowly. Of course, he will remain a candidate to start out on the left, though fielding him and Sweat may be a bit redundant tactically.

Also of note: Shea added fuel to the fire in this budding rivalry after scoring his goal by running over to the Orlando City’s supporters section and taunting the home fans with his trademark celebration. You might not have been able to hear it on the broadcast, but every time he touched the ball from that point on he was greeted with a chorus of jeers and boos.

There’s a common saying in Spanish that goes, ‘El futbol es de momentos,’ which translates to “Soccer is a game of moments.”

Reyes was involved in giving up a goal for the second straight game, and this time it was he who pushed the ball into the Inter Miami net with a poorly attempted clearance in the 34th minute. Maybe Reyes could not see the ball clearly on the free kick in that moment given that there were a few bodies in front of him, but his awkward attempt to play it to safety resulted in a calamitous effort.

The 21-year-old Reyes, who it must be said is a bit unorthodox in his style of play, has been more good than bad this season for the expansion side. Young players tend, however, to be inconsistent and usually endure some rough patches.

Reyes seems to be going through that right now, and it might be best to give him a break, at least for one game, so that he can recharge and reset.

Luis Robles (7) — Made two solid stops, including on a Nani free kick from in close in the first half.

Nicolas Figal (5.5) — Had some difficulty marking Nani, including on the play that led to the opener, but overall held up well and passed accurately.

Andres Reyes (4) — Delivered a better second half, but his awkward clearance that turned into an own goal summed up a largely forgettable night.

Ben Sweat (5) — Left the game after just a couple of minutes due to a collision of heads with Gonzalez Pirez.

Blaise Matuidi (5.5) — Helped string together a couple of good sequences, but that was too few and far between. Also committed a needless foul at the top of the box that resulted in a dangerous free kick.

Victor Ulloa (6) — Lasted only 45 minutes, but they were a good 45 minutes in which he moved the ball forward and got involved defensively.

Lewis Morgan (5.5) — Tried to make things happen and was aggressive on the dribble again. His set-piece delivery still needs work, though.

Rodolfo Pizarro (5.5) — Hit a nice assist on the equalizer, but also lost the ball on the decisive play after colliding with Matuidi. All in all, a mixed showing.

Juan Agudelo (5) — Sweat’s exit robbed him of someone to combine with down the left, limiting the attacker’s impact and forcing him to play a more tactical game.

Robbie Robinson (4.5) — Had one nice cutback that led to a dangerous low cross, but aside from that struggled with his touch and likely frustrated Alonso with a lack of intensity in the press.

Mikey Ambrose (5) — Came in for Sweat early and did the job defensively while not providing much to the attack before being removed at halftime.

Brek Shea (7) — Another strong showing off the bench, not only because of the quality headed finish but because of the amount of dangerous balls he whipped into the box.

Dylan Nealis (6) — Helped provide width after coming on at the break, hit a couple of good crosses, defended well, and avoided another Nani nightmare.

Julian Carranza (5.5) — Drew a team-high four fouls in his 29 minutes and nearly won a vital penalty, but was just offside on the controversial play.

Matias Pellegrini (4.5) — A short disappointing cameo underlined by his flubbed cross on a drawn-up free kick.

Diego Alonso (5) — His initial game plan was affected by losing Sweat right away, but made tactical changes at halftime that paid major dividends. Still, Inter Miami left a lot to be desired as a whole in that first half.