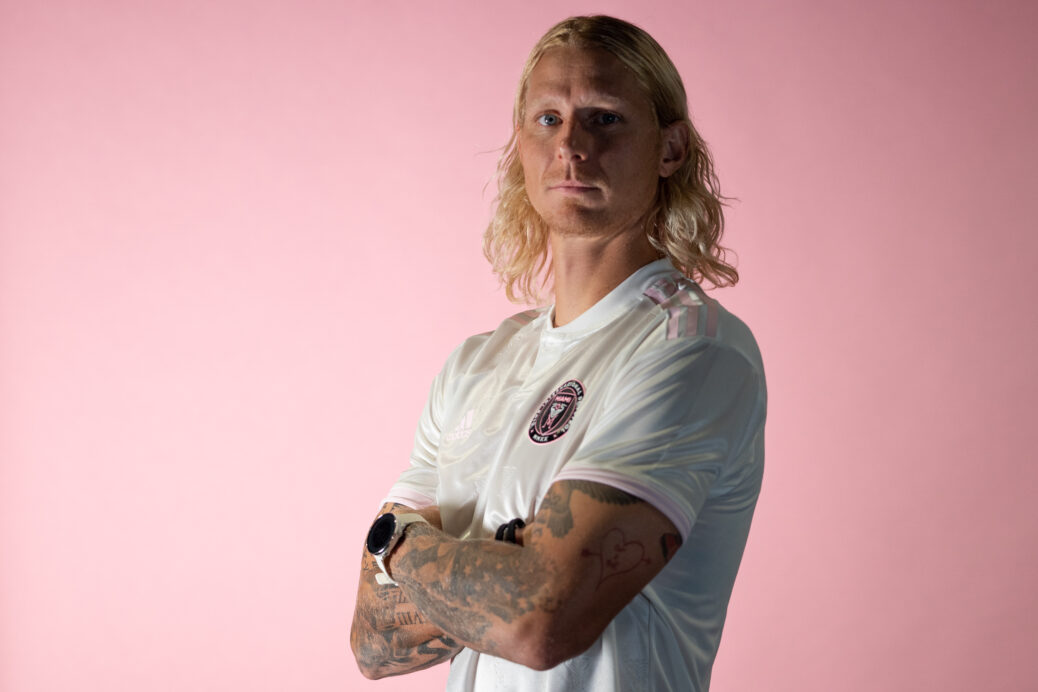 Brek Shea is not yet back to 100 percent, but you might have been hard-pressed to guess that judging by his latest performance.

Shea was a key component in Inter Miami’s historic 2-1 road win vs. Atlanta United on Saturday night, playing a part in both of the expansion side’s early goals. The wide midfielder first clipped a nice ball to Juan Agudelo to help initiate the sequence that led to the record-breaking opener, and also headed home with ease after getting into a good spot in front of the penalty area minutes later.

All this just a week after scoring his first MLS goal in more than two years, and all this after more than 12 months on the sidelines due to a devastating knee injury.

“We are happy with the performances Brek has had,” said head coach Diego Alonso in Spanish. “He has been helping the team a lot. He came into the group late because he was coming off a long injury, and little by little he has regained the necessary rhythm to play. He’s helped the team a lot in this period of growth.”

A great cross and a perfect finish. 2 goals in 2 games for Brek Shea. pic.twitter.com/efDzkqQmIX

Shea’s performances have been increasingly getting better as he has gotten more time and game action to shake off the accumulated rust picked up during his spell on the trainer’s table. It is not just the goals that have helped him stand out, but also his ability to provide verticality and a dose of crosses from the left wing.

Inter Miami has been looking for that type of play for much of this year. The expansion team has been unbalanced in the attack most of the season in part because only right midfielder Lewis Morgan was providing a constant threat from wide spots. That tilted Inter Miami’s play to one side of the field, and made defending easier for opposing teams.

Now, however, Inter Miami’s attack has begun to find more equilibrium. Shea and Juan Agudelo have provided a boost to the left midfield position in recent games, and things only figure to improve the closer the former gets to returning to his top form.

After all, Shea is a natural wide player and one that showed again on Saturday that he can make the difference despite not yet being at his best.

“I was out for a year and three months. It is going to take a while to get back to where I want to be,” said Shea. “But I’m having fun and love this group of guys.”

On a related note, Inter Miami continued to show gradual improvements with its best half of attacking soccer this season.

How? Through better collective play.

Inter Miami constantly pushed forward to great effect in the first stanza as a result of good team build-up. The two goals inside 11 minutes helped open Atlanta United up, of course, but almost everyone was involved in the attacks before the break — be it Rodolfo Pizarro with superb combinations, Agudelo with stellar hold-up play, Nicolas Figal with overlaps and crosses, or Victor Ulloa with late runs.

As a result, Inter Miami went into halftime with 10 shots and four on target, far and away its best production in a half from a statistical standpoint. What’s more, the South Florida side had two other goals ruled out because of narrow offsides.

One would be remiss not to note that Atlanta United is a struggling team that is currently in transition and that was void of real difference-makers in this match. Still, Inter Miami has begun to show slow and steady progress in the attack in recent weeks, with this display serving as the latest evidence of that.

Head coach Diego Alonso stated that Agudelo had “a complete performance” on Saturday, but the Uruguayan manager could have just as easily said the same about his team.

After the attack shone in the first half, the defense stepped up in the second to grind out the historic win. Inter Miami lost a bit of its stranglehold on the game after the break, as Atlanta United started playing less direct and more side to side in an effort to keep possession for larger stretches.

That forced Inter Miami to have to do a lot of running after the ball, but Alonso’s squad stayed organized and compact to limit Atlanta United’s opportunities. Once again, seemingly everyone played their part, including goalkeeper Luis Robles on the one clear-cut chance Atlanta United had to equalize in the 69th minute.

All in all, this was a true professional performance and one Inter Miami should look to build on.

Luis Robles (5) — Delivered a big stop to preserve the lead in the second half, but his poor clearance early on led to Atlanta United’s goal.

Nicolas Figal (5.5) — Lost his mark on the equalizer and may have been lucky to escape a caution, but he largely held up despite being tested often.

Andres Reyes (6) — A strong bounce-back display with more accurate passing. The only slight was his needless second-half yellow card that rules him out of Wednesday’s game.

Leandro Gonzalez Pirez (7) — Another brick wall outing with plenty of interventions and clearances. His passing was not as good as usual, though.

Ben Sweat (6) — Pushed into the attack regularly and was not troubled defensively, aside from one first-half play in which he misplayed the ball.

Blaise Matuidi (6) — Drove the ball forward often in the first half with his quick passing or dribbling runs, but his impact faded after the break.

Victor Ulloa (6.5) — Covered lots of ground and showed a willingness to shoot, even scoring on a well-taken volley that was negated due to offside.

Lewis Morgan (6.5) — Made an intelligent dribbling run into space to help create the opener, and took the quick throw-in that set up the winner. His set-piece delivery was improved, too.

Rodolfo Pizarro (6.5) — An incredible first touch with his thigh allowed him to deliver the lofted cross on the decisive play. Also combined well throughout.

Brek Shea (7.5) — Was directly involved in both goals and served as an active passing outlet during the team’s strong opening 30 minutes as well.

Juan Agudelo (7.5) — His best outing this year. Not only scored a clinical goal early, but his hold-up and combination play were quality. Had eyes in the back of his head on that early through ball to Morgan.

Dylan Nealis (6.5) — Came in and provided no-nonsense defending as Inter Miami tried to grind out the victory.

Wil Trapp (5.5) — Had an incredibly well-timed slide tackle that put out a fire just outside the penalty area, but also had a poor turnover on the dribble that came back the other way.

Matias Pellegrini (5.5) — Got a few touches and hurried about as Inter Miami tried to close the game out.

Roman Torres (N/A) — Did not see any of the ball after being subbed in late to help reach the finish line in his first appearance since July 20.

Diego Alonso (7.5) — The team delivered as complete a performance as it has had, taking turns playing very strong in both facets. The side was stuck chasing the game during the final half-hour, though.