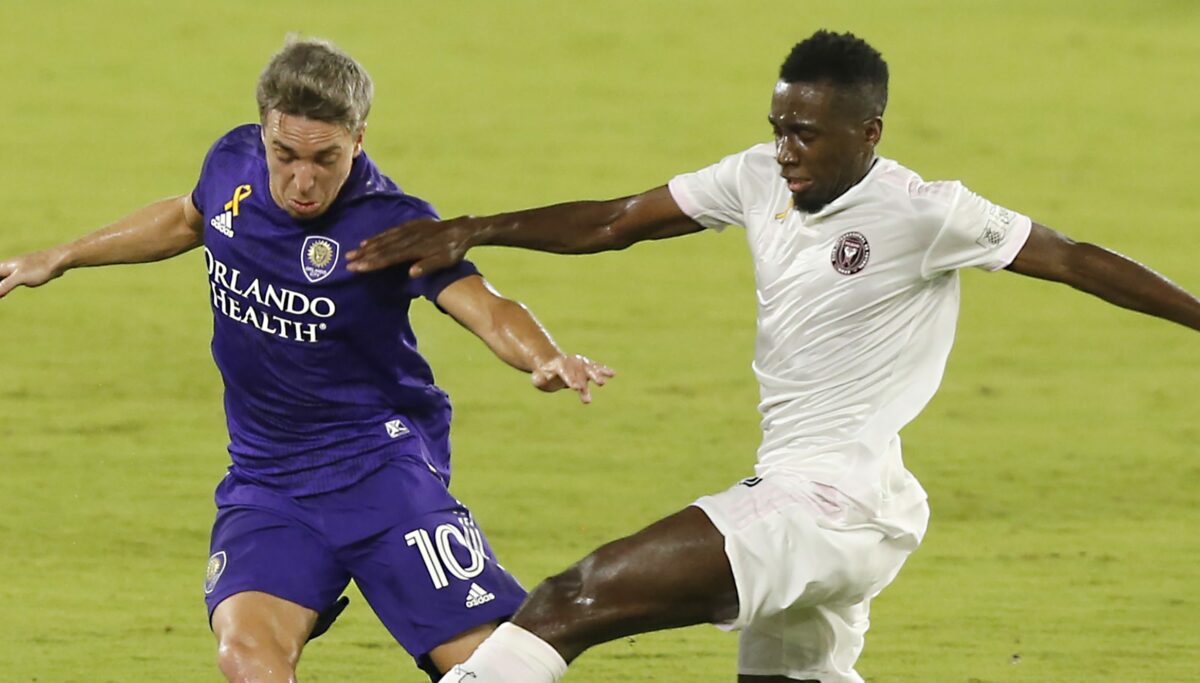 ORLANDO, Fla. — Saturday was a tale of two halves for Inter Miami.

Unfortunately for the expansion side, the improved second stanza was still not good enough to grab a result.

Inter Miami suffered a seventh defeat in this 2020 MLS season on Saturday night, losing, 2-1, to rivals Orlando City at Exploria Stadium. The expansion side endured a poor first 45 minutes that was summed up by an own goal from young centerback Andres Reyes before bouncing back with a much improved showing in the after halftime.

“It’s a game that without a doubt is clearly divided in two halves, the first of which I absolutely did not like,” said head coach Diego Alonso in Spanish. “We were a lukewarm team. We didn’t attack, we didn’t defend, we didn’t press, we didn’t play from the mid-block. We went without dictating the tempo the entire first half, be it in the attack or on the defense, and that is not who we are.

Staring at a 1-0 deficit at the half and looking to wake his team up, Alonso changed things up tactically at the break. The Uruguayan manager subbed in Brek Shea and Dylan Nealis as wingbacks, moving away from the 4-2-3-1 formation Inter Miami started the match with and into a fluid 3-5-2 setup that at times looked like a 3-4-3.

The width and dose of crosses Shea and Nealis provided helped Inter Miami immediately, as the South Florida side not only found more of the game but bossed it for large stretches against a reeling Orlando City. Inter Miami was eventually rewarded for its improved play with an equalizer, which Shea provided in the 65th minute with a header that opened his Inter Miami account.

Inter Miami may have been much better in the closing 45 minutes, but one mistake shortly after Shea struck doomed the team to defeat. Rodolfo Pizarro lost the ball at midfield in the 69th minute, and Orlando City hit back quickly to take advantage of the space allowed before Mauricio Pereyra hit a low shot in off the left post.

A golden chance seemed to come Inter Miami’s way four minutes later. A clearance from Lions centerback Rodrigo Schlegel went to VAR for a potential foul in the box, which was subsequently awarded along with a sending off for Schlegel.

Head referee Ismail Elfath wiped everything out a few moments later, however. Elfath ruled, after further deliberation, that Julian Carranza was offside on the play that led the foul, thus voiding the penalty and ejection.

“It’s the second time that it’s happened to this team where we have a chance to score or we scored and it’s reversed,” said Shea. “It’s frustrating for players in the team to think you’re going to have a penalty kick and get a red card for the other team and have a chance to go ahead and win.

“It’s just turned around and it takes 15 minutes to do that and we’re just standing around waiting, we don’t know what’s going on. It’s frustrating.”

What made it even more frustrating was the end result. The 2-1 loss dropped Inter Miami to 2-7-2 on the year and back into last place in the Eastern Conference. Only three points separate the team from a playoff spot, but Inter Miami knows it has to play better for longer.

Saturday was just the latest reminder of that.

“We’ve just got to put it all together,” said Shea. “We can’t seem to get 90 minutes every game and put it together.”