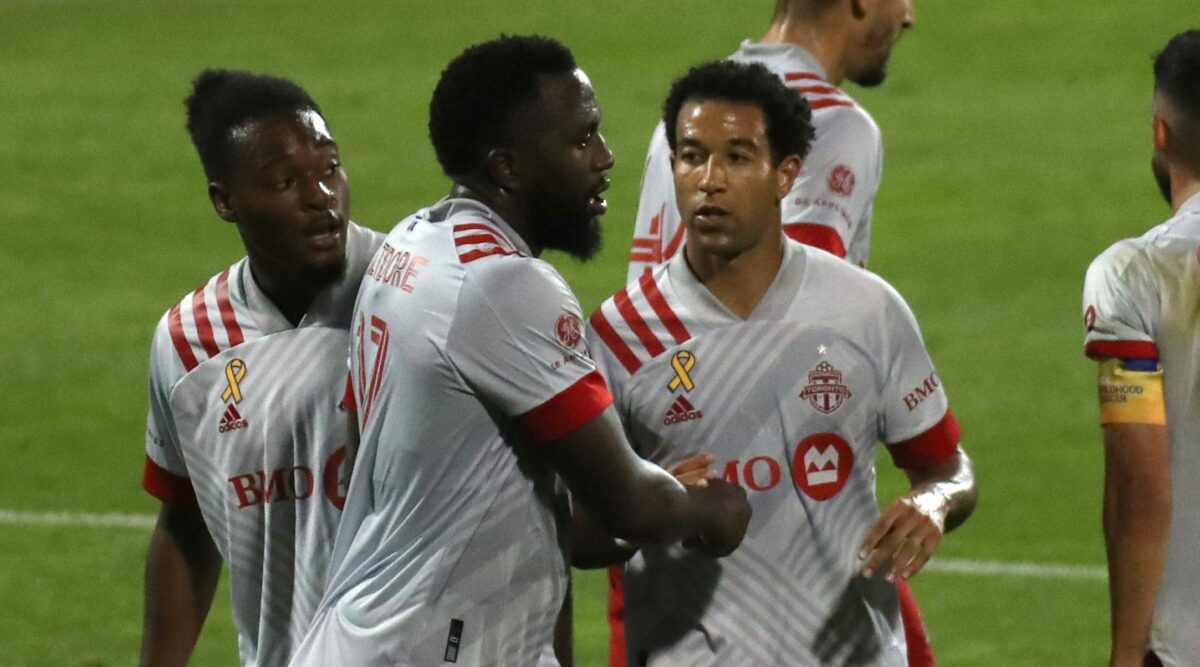 Jozy Altidore’s late winner was enough to propel Toronto FC within touching distance of yet another Canadian Championship final.

Greg Vanney’s men overcame the Montreal Impact 2-1 on Wednesday to snap their two-game losing streak. Toronto FC now finds themselves six points ahead of Thierry Henry’s men in round-robin play, albeit having played two more games than their fierce rivals.

Ultimately, the team that finishes in first place after six group games plays the winner of the Canadian Premier League in the Canadian Championship final. The winner will then be awarded a spot in next season’s CONCACAF Champions League.

Toronto FC entered the game in a must-win scenario after dropping games against the Vancouver Whitecaps and the Impact earlier in the week and did just that on Wednesday.

The Impact will now have to win both of their remaining games, in addition to overtaking their fierce rivals on goal difference. It is not an impossible prospect for Henry’s men, but Altidore’s winner essentially has TFC with one foot in the final.

Toronto FC sat deep into their own half with the game tied at one and looked to hit the Impact in open space. Alejandro Pozuelo and Pablo Piatti roamed dangerously behind Altidore throughout, with the latter netting the opener on the counter. This tactic paid dividends once more right before stoppage time, as Vanney’s men found the crucial go-ahead goal thanks to Camacho’s turnover.

Jozy Altidore entered the game with no goals in six appearances, but put his woes behind him with just two minutes to play, slotting past a helpless Clement Diop. The U.S Men’s National Team striker atoned for his earlier miss one-on-one with the Impact shot-stopper, propelling Toronto FC in the driver’s seat.

In many ways, Toronto FC’s pedigree and experience were on display on Wednesday as Vanney’s men did not panic with their backs against the wall. A draw would have almost certainly sealed their fates.

Thierry Henry maintained the same eleven from last week’s win over Toronto FC, deploying a front three of Romell Quioto, Lassi Lappalainen, and Saphir Taider. Once more, however, it took a set-piece to find the back of the net.

Despite this, the Impact was a few minutes away from claiming a crucial point, but ultimately a defensive lapse in concentration cost the side. Rudy Camacho will be disappointed with his mistake after an impressive performance, having gifted Toronto FC the ball deep in his own half.

“We cannot let a game slip like that. It would have been good for morale,” said midfielder Samuel Piette. “It’s devastating to lose like that, I think we gave the game away.”

Toronto FC will now eagerly await the Impact’s last two games of round-robin play. Thierry Henry’s men travel to BC Place on Sunday to take on the Vancouver Whitecaps and will then play their final game on Wednesday in the ultimate decider. It was not Toronto FC’s best performance of the season, but, as it stands, Vanney’s men are comfortably in the driver’s seat.

“We have to learn from our mistakes, the goal was a mistake, but we have to move forward and see what we can do in Vancouver,” said Henry. “It is what it is. We live and learn, but it’s not an easy one to take. That’s why Toronto went to three out of the last four finals. You have to give them respect.”