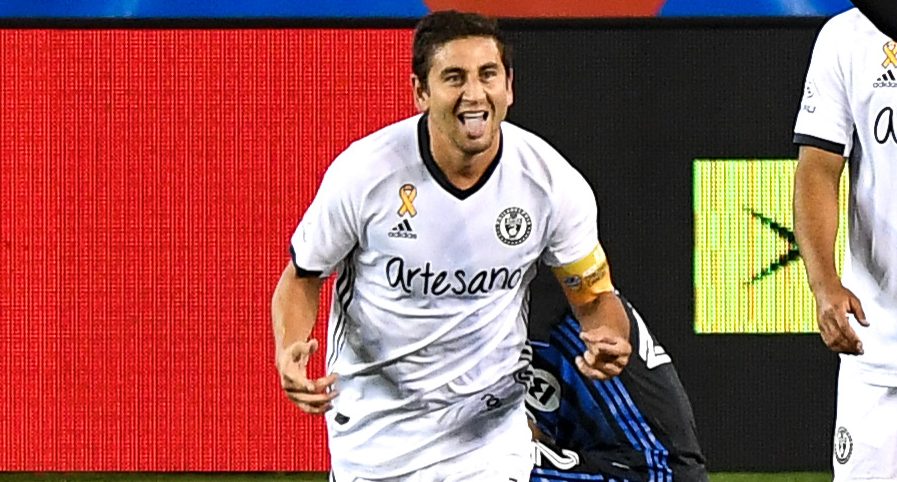 The Philadelphia Union started slow at Red Bull Arena on Sunday night, but eventually rolled to three points on the road over the Montreal Impact.

Kacper Przybylko scored a brace while Alejandro Bedoya and Anthony Fontana each added goals as Jim Curtin’s side picked up a 4-1 victory. Romell Quioto was sent off in the 16th minute after elbowing Union defender Mark McKenzie, flipping the match in the Union’s favor.

The Honduran opened the scoring in the fifth minute, beating Andre Blake with a right-footed free kick to the bottom corner. A poor defensive wall from the Union allowed Quioto to curl a free kick through the wall and past the Jamaican shot stopper for his fifth goal of the season.

Quioto’s night came to an abrupt and early end though with the forward getting sent off in the 16th minute. After battling with McKenzie for possession, Quioto caught McKenzie with an elbow to the head and was given a red card after referee Marcos de Oliveira used VAR to overturn his previous decision.

The Union made the most of the man advantage and leveled things up in the 22nd minute. Matt Real’s cross from the left wing was chested down by striker Andrew Wooten, allowing Alejandro Bedoya to race up and blast a shot past Clement Diop. It was Bedoya’s second goal of the season.

Real’s service came up clutch again just before halftime, helping the Union grab a 2-1 advantage. His cross went towards the back post and was headed home by Przybylko in the third minute of stoppage time.

The Polish striker added to his earlier tally in the 47th minute, finishing home a good move from Brenden Aaronson. Aaronson’s got into the box and played a ball to Przybylko, who eventually was able to beat Diop for his second goal of the night.

Anthony Fontana continued his strong run of form off the bench, adding his third goal in his last two appearances. The midfielder rifled a right-footed shot past Diop to the bottom-left corner adding a fourth goal for the Union on the night.

The Union move to three points behind Eastern Conference leaders Columbus with its third straight win and next travels to FC Cincinnati on Wednesday.

Montreal’s first defeat against a team outside of Toronto and Vancouver since the return to league play sees them stay in sixth place. Up next is a trip to Gillette Stadium on Wednesday for a date with the New England Revolution.

Matt Real: Kacper Przybylko may have scored twice, but Matt Real’s service at left back was sensational. He helped set up the opening two goals for the Union and did well defensively as well.

Quioto’s red card: The Impact grabbed an important lead in Harrison, but Quioto’s foolish red card put Thierry Henry’s men into a hole. The Union took advantage of the man advantage and eventually rolled to three points. Quioto will likely be suspended now for trips to New England and back to Harrison against the Red Bulls.

Quioto: An MLS veteran, Quioto’s decision cost his team a chance at three points against a top side. His absence for the next two matches will force other forwards to step up.