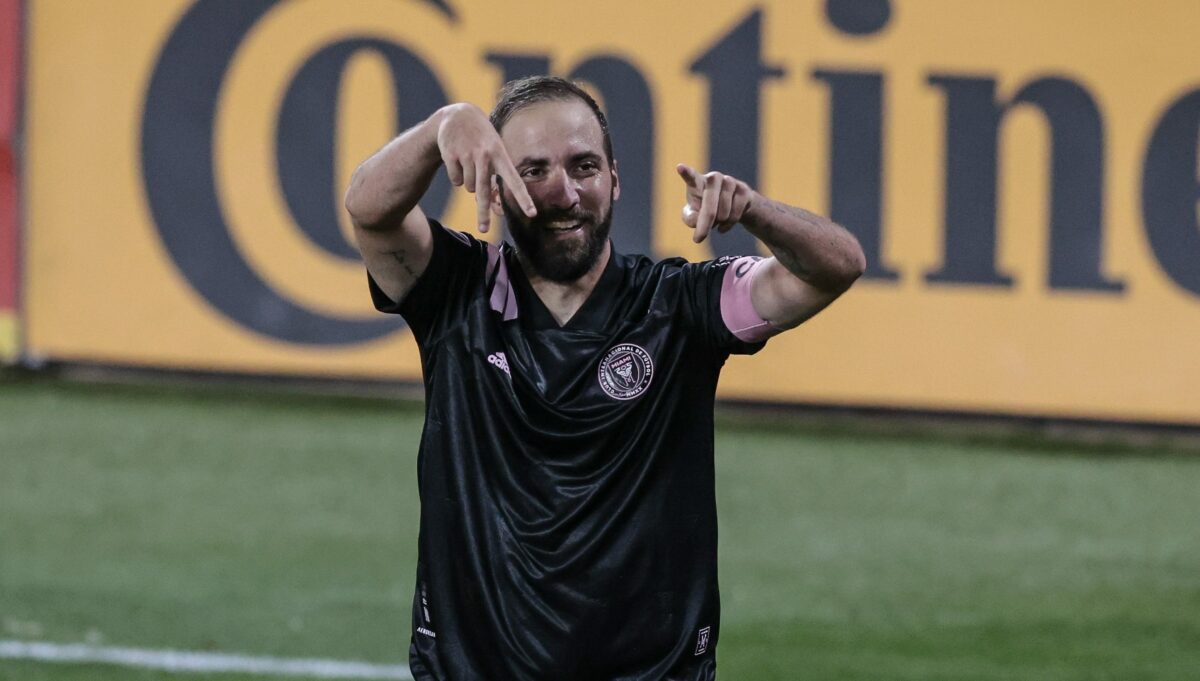 That was just some of what Gonzalo Higuain delivered in his first match as Inter Miami captain.

Inter Miami was down five starters on Wednesday night, but got the goods from Higuain in a 2-1 come-from-behind win over the New York Red Bulls. Higuain stepped up and delivered for the expansion side in the road game, first by helping to create a second-half equalizer almost immediately after Inter Miami conceded and then by firing a sizzling set piece inside the top part of right post.

The 81st-minute strike marked Higuain’s first goal for Inter Miami and in MLS, but for him it was merely part of a day’s work.

“I didn’t feel relief because all my career I’ve had pressure to score goals and try to perform to the maximum level because I played at the highest levels in Europe,” said Higuain in Spanish. “I also didn’t feel pressure in the sense that I was obligated to score. Of course, the No. 1 function for a striker is to score, but I didn’t create anxiety for myself about that.”

You: Give us @RayHudson’s call!

Higuain was as cool as you would like on the decisive play. The 32-year-old striker stood over the ball laser-focused, and, rather than curling it up and over the wall, opted to put power behind his shot and go to Red Bulls goalkeeper David Jensen’s post. The end result was an emphatic effort that is sure to be seen around the globe.

The Designated Player’s impressive account opener will be a major talking point after Inter Miami picked up the first comeback win in its short history, but his overall outing, particularly in the second half, was a positive for the South Florida side. Higuain not only helped initiate attacks with good passes, but also sparked the rally by hitting a good ball wide before drawing two centerbacks his way on a cross that found a wide open Matias Pellegrini in the 55th minute for the equalizer.

“His arrival has been refreshing,” said head coach Diego Alonso of Higuain in Spanish. “Not only today but I think he had very good games in the two previous matches. He helped us a lot in the style of play, we waited a long time for a player of his quality, and he’s made us better since he has arrived.

“We needed a player that could help us make quick switches, that could help us have better movement, that can free up others, and that can always generate danger and attract rival centerbacks in a special way so that they can be aware of him, which then opens up space not only for him but for the other players as well. He’s done that in an exceptional way in all three games he’s played.”

The ball from Morgan.
The confident finish.

It might not be a coincidence that Higuain’s first game-changing shift for Inter Miami came in his first appearance as the team captain. Luis Robles had worn the armband every minute of the season prior to Wednesday’s game, but an injury to the starting goalkeeper this past weekend forced the change.

“Obviously the trajectory he has in the group is exceptional,” said Alonso. “He has truly been a top, top player in the world. He’s been on the best teams in the world as their best player, and has arrived here with humility to work, to train, to not miss a day, to comply with all the schedules, to be an example, and that allows us to be at ease with him as captain of the team.”

The honor of wearing the Inter Miami armband seems to have motivated the star Argentine some. Not only because he proved to be the difference-maker with his second-half heroics, but also because the captaincy gave him a morale boost in an unprecedented comeback.

“Few times have I been called on to be captain and to feel that responsibility to be captain of the team in such an important game left me only with pride,” said Higuain. “I always tried to assist the team, to help the team, and to help us when we made mistakes or when I made mistakes. The important thing here is to help your teammates, and as captain I wanted to demonstrate that.

“Honestly, it gave me immense joy when Diego told me he confided in me. I feel very happy to be captain of this group of players that left it all on the field. When you’re captain of a team like that, all you’re left to feel is pride.”