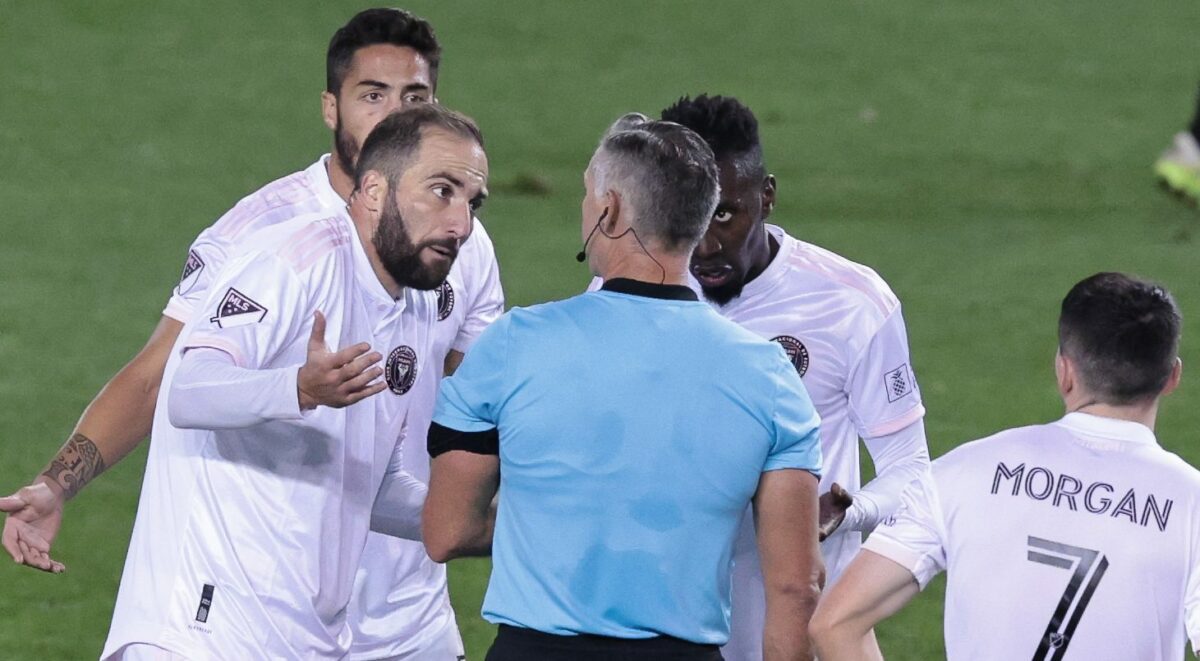 Gonzalo Higuain has not had an ideal start to life in MLS as an Inter Miami player. Saturday’s match and his subsequent red card only served to further emphasize that point.

Inter Miami saw its unbeaten streak come to a halt on Saturday night after suffering a 2-1 road defeat to the Montreal Impact. The expansion side did not only lose for the first time in four matches, but a few of its players, including Higuain, lost their cool after the final whistle and argued with head referee Timothy Ford. What followed afterwards was a red card for Higuain, who had already endured a rough night even prior to his ejection.

The Argentine striker was starved largely of service against the Impact, finishing with the fewest touches (34) of any starting field player on either team. Higuain’s little contact with the ball resulted in him often dropping into deeper positions to try and get more involved in the build-up, but that only seemed to further frustrate him when he did not get a pass or when one was misplayed.

On more than one occasion Higuain was demonstrative in expressing his aggravation, and at one point in the second half he even barked loudly at Ford during the run of play for what the forward deemed was an uncalled foul. Making matters worse was that Higuain could not come up with the necessary quality the few times he did have the ball in front of goal, including on the 80th-minute chance that was saved just seconds before the Impact scored the winner.

No comment from Inter Miami on the matter as of now.

All that combined with another no-call on contact on teammate Leandro Gonzalez Pirez in the Impact’s penalty area near the end of the match led to Higuain confronting Ford after the final whistle. Ford clearly did not like whatever the veteran attacker said, issuing Higuain a red card that has oddly not been listed on the official match report.

Whether the ejection stands or not, it’s clear these first six games in an Inter Miami jersey have been less than ideal for Higuain. He has missed a penalty, scored just once, and now has a run-in with a ref and red card to boot.

Questions should be raised about just how good Inter Miami’s game plan for this one was. Head coach Diego Alonso had his side start the match in the 4-3-3 formation it has used at different times this year, but moved out of it and into more of a 5-3-2 look with Shea dropping from his winger role into a wingback spot after about 15 minutes.

Obviously the early goal had an impact in that decision, but so too did the defensive disorganization that was on display from the onset. Inter Miami lost a lot of individual battles, spacing between lines was wrong, and the team was just a bit all over the place when not in possession. Bojan’s sixth-minute opener, while largely on Inter Miami goalkeeper John McCarthy, was a clear example of some of those issues.

“Today we were clearly dominated in the beginning,” said Alonso in Spanish.

Bojan rips one past the goalkeeper for his third of the year.

Things got better in the second half in terms of the defensive posture, but Inter Miami still gave up plenty of looks as Gonzalez Pirez and Nicolas Figal struggled, in particular, to deal with the runs of Bojan and Romell Quioto.

The Impact finished with 16 shots and eight on target, clear signs that Inter Miami was far from at its best defensively.

This has been written about in this space repeatedly: Inter Miami just does not generate enough clear-cut scoring opportunities. Part of that is because the attacking play is unbalanced and part of it is down to tactics.

Let’s start with the former. Inter Miami likes to play from the outside in, but the problem is that the only winger Inter Miami has that consistently takes on defenders, whips in crosses, and tries to make things happen is right-sided player Lewis Morgan. No one on the left flank has been able to offer that kind of threat in the attack consistently, which has made Inter Miami largely one-dimensional since it can only really cause damage on the right during the run of play.

It is why when Alonso switched to a 5-3-2 on Saturday you saw Lewis play more as a shadow striker with freedom to roam behind Higuain. Lewis was tasked with trying to generate more opportunities for the team and occupied central positions as well as ones on the left and right, but it was still a bit hit and miss and Inter Miami finished just four shots on target and one goal that came off a deflection.

That leads us to the tactics, which Alonso touched on in detail on Saturday.

“I particularly like for the team to unbalance down the wings,” said Alonso. “I think that’s the way to better open up defenses. If you can open the game up on the wings then the spaces in the middle arrive, but you can’t go inside if you don’t first go outside.”

John McCarthy (4.5) — Made six saves, some of which were pretty good, but the early opener is largely on him for misreading the ball’s trajectory.

Dylan Nealis (6) — Got forward well at times to take some pressure off Morgan and had a couple of shots, one of which he could’ve done better with.

Nicolas Figal (4.5) — Had a tough time dealing with Bojan’s shiftiness and Quioto’s explosiveness. A far cry from his usual solid defensive displays.

Leandro Gonzalez Pirez (5.5) — Assisted on the equalizer and generated a couple of the team’s best looks, but also made some puzzling decisions at the back and struggled in some individual battles.

Ben Sweat (6) — Went from left back to left centerback after 15 minutes, resulting in a solid but quiet defensive performance.

Wil Trapp (5.5) — Accurate with his range of passes, though he struggled a bit defensively at times and did not always take up correct positions.

Victor Ulloa (4.5) — Largely to blame for not tracking his runner on the game-winner, which overshadowed an otherwise decent industrious outing.

Blaise Matuidi (5.5) — Very good at circulating the ball while also having some positional issues on the defensive side.

Lewis Morgan (7) — The attacking catalyst yet again, constantly looking to make things happen when in possession be it with dribbles, crosses, or shots.

Gonzalo Higuain (4) — Did not get a whole lot of touches, was unable to come up with the necessary quality when he did get the ball in dangerous spots, and got a post-game red card for his troubles.

Brek Shea (5.5) — Scored the equalizer to give the team a lifeline, but he did not offer much else in this one.

Julian Carranza (4.5) — Saw very little of the ball during his 20 minutes.

Matias Pellegrini (5) — Hit one stinging shot during his brief cameo that was not too far off from the top left corner.

Federico Higuain (5.5) — Was involved often after entering in the 81st minute, constantly getting on the ball and looking to combine.

Diego Alonso (3.5) — His initial game plan required changing after just a quarter-hour, the defensive posture was not great to start, the attack sputtered, and he went to his bench too late.