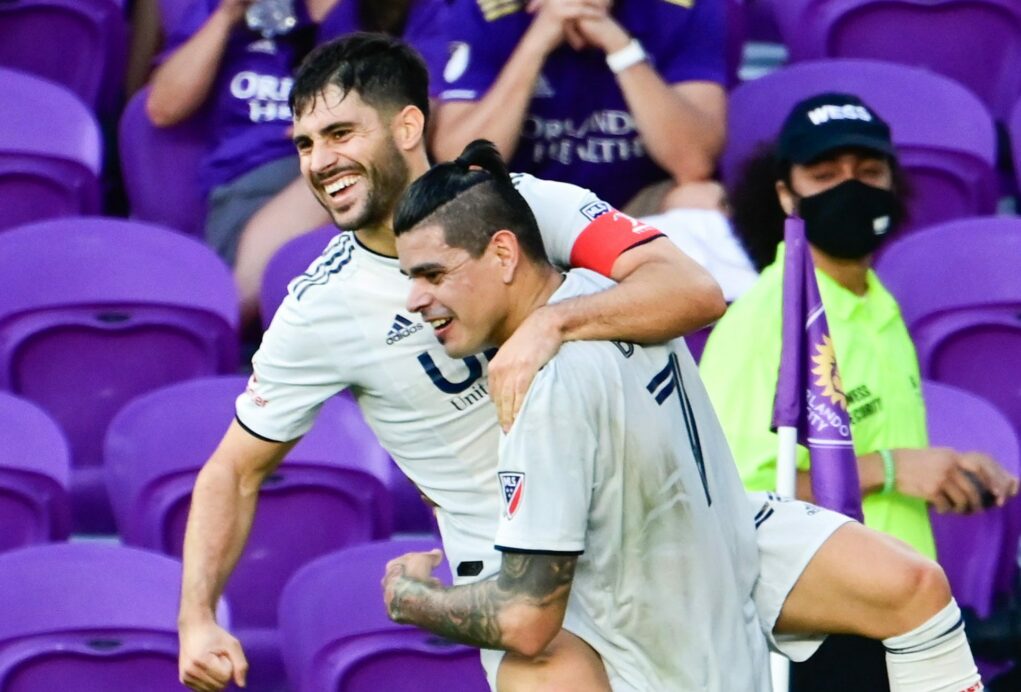 The New England Revolution have scored seven goals in three games during their surprise playoff run, and every single one of those tallies has involved  Gustavo Bou and/or Carles Gil in some capacity.

There are no signs the duo is going to slow down, either.

The Revolution continued their impressive postseason campaign by reaching the Eastern Conference Final on Sunday afternoon via a 3-1 road win vs. 10-man Orlando City. The red-hot attacking combo of Bou and Gil led the way in the upset victory, with the Spaniard converting an early penalty before the Argentine bagged a brace in the team’s third consecutive playoff triumph.

If stars tend to shine during the biggest moments, Bou and Gil are the latest examples of that. The two veterans now have a combined five goals and four assists in this Cinderella story, production that has been vital in both helping the eighth-seeded Revolution win back-to-back road matches and make their deepest playoff run since 2014.

“I am very happy to be in [the Eastern Conference] final,” said Bou in Spanish. “I am really happy and proud of the team for all our efforts this year. We know that it was a very tough year for all of us, with many sacrifices. All our efforts this year are coming to fruition today. I am very happy. I am happy to be able to help my teammates get the win and I feel fortunate to have scored two goals.”

Of course, the Revolution may not have prevailed at Exploria Stadium in Orlando, Florida, without goalkeeper Matt Turner denying Nani on a 74th-minute penalty that could have leveled the match at 2-2. Still, Bou and Gil’s contributions in the final third were equally as important in moving the team to within a game of the MLS Cup Final.

The 28-year-old Gil got things started for the Revolution with his cooly-taken spot kick after just 16 minutes, a composed shot hit down the middle that gave him his second goal in these playoffs.

“He is technically very good, he is experienced, he has got composure,” said head coach Bruce Arena of Gil. “If I am not mistaken, in the time I have been here he has not missed a penalty. I do not follow statistics that closely, but I think he took about four of them last year and made them and in some big moments. He is always our choice if he is on the field to take a penalty.”

Bou doubled the lead 10 minutes later, with the 30-year-old attacker pouncing on a rebound that hit the post and smashing it home from close range. He followed that up with a tribute to the late Diego Maradona by grabbing an Argentina flag, laying it on the ground, and then kneeling and pointing to the sky before kissing it.

“I think everyone in the world of football was hurt and saddened by Maradona’s death,” said Bou of his goal celebration. “I wanted to pay homage to Maradona. I hope he sees it and I am sure he saw it because he loved the sport. He is a reason why a lot of people in Argentina love this sport.”

Putting the cherry on top was that the pair of attackers connected in the waning moments of the match to effectively put Orlando City away, with Gil hitting a great through ball into space to find Bou’s well-timed run down the middle. Bou punctuated the play with a good finish, marking his third goal in a postseason run that has the makings of something special.

Two consecutive upsets on the road are a big part of that, as are the continued difference-making performances from the Revolution’s star attacking duo.

“We are conscious of the fact that it is going to be tough for us, (starting with) the first playoff game,” said Bou. “We did not get the seed that we wanted. We classified for the playoffs as the eighth seed and we knew we would have to play games on the road. Thank God things are going well for us right now. The team is very strong both mentally and physically, and we try to leave everything out on the field in every game.”