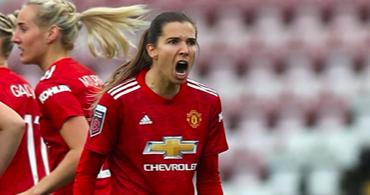 Three U.S. Women’s National Team players got the start in Saturday’s first Manchester Derby of the new Women’s Super League season, but only one got on the scoresheet.

Tobin Heath scored her first goal of the WSL season, kickstarting a fight back for a 2-2 draw for Manchester United against rivals Manchester City. After picking up possession just inside the box, Heath cut onto her right foot before rifling a shot past Ellie Roebuck.

Manchester City took a 2-0 lead in the opening half after Chloe Kelly and Laura Coombs each scored goals. Kelly beat Heath to a loose ball off a corner kick to break the deadlock before Coombs scored on a strong finish of her own.

Heath’s goal began a dominant half for the Lady Red Devils who tied things up in the 74th minute as Kirsty Hanson scored off a rebound. The points were shared between the clubs, who meet again on Thursday in the third group stage match of the FA WSL Cup.

Samantha Mewis got the start for Gareth Taylor’s side, impressing from her midfield position. Christen Press also started in the match, alongside Heath in Casey Stoney’s lineup while Rose Lavelle was an unused substitute for Man City.

Man United stays atop the WSL table for now, two points clear of second place Arsenal. Man City moves up to fifth, but will feel disappointed after coughing up a multi-goal advantage.