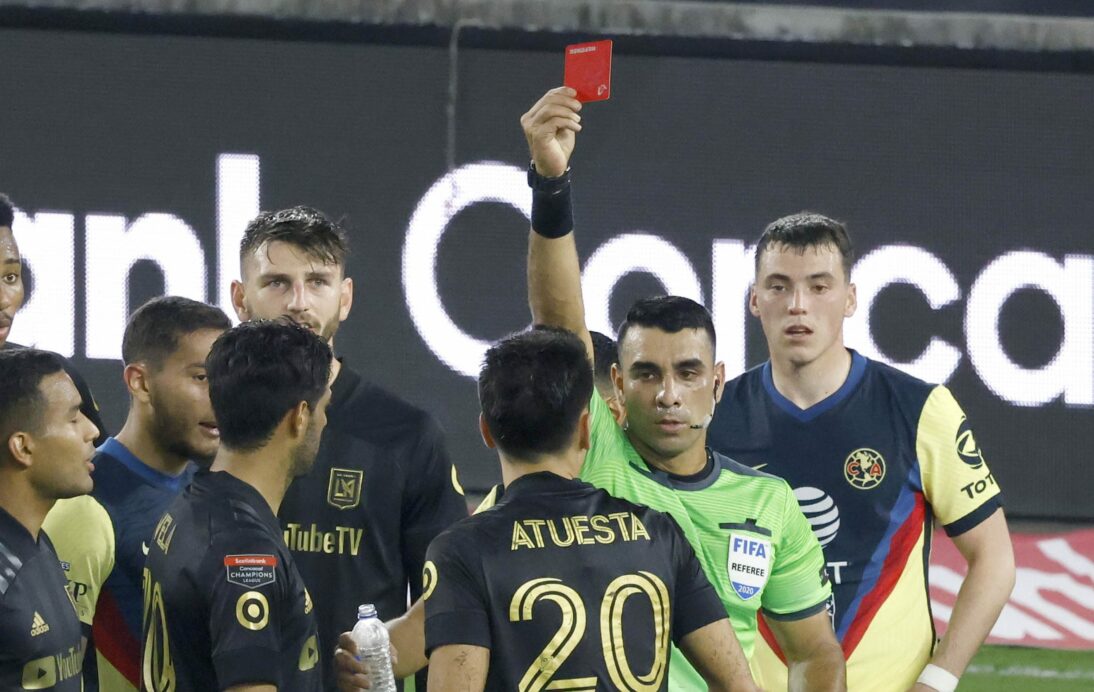 Almost anyone who has watched a U.S. Men’s National Team-Mexico match or even a Concacaf Champions League game involving one side from MLS and another from Liga MX had probably seen this movie before.

A Mexican outfit was using the dark arts to try and take advantage of the opposition’s naivety. It looked like it might work, too. Until it didn’t.

LAFC rallied to eliminate Club America in the Concacaf Champions League semifinals on Saturday night, overcoming a first-half red card and deficit to win by a 3-1 mark. Yet while the impressive comeback was a major talking point, so too was the gamesmanship, craft, and cunning efforts employed by the Mexican club to get under the skin and into the heads of the Black and Gold.

“The attempt to just use that as a way of trying to get the edge and the win, you have got to be smart enough,” said LAFC head coach Bob Bradley after the match at Exploria Stadium in Orlando, Florida. “We were saying from the beginning from our side, ‘Play the game, be smart. do not be naive, and do not get caught up with all the other stuff going on.’

“I cannot speak to the refs, but I think our guys handled things well.”

LAFC may have kept it together for most of the match, but the team was not flawless in that regard. Left back Diego Palacios was issued a yellow card in the eighth minute for retaliating to an off-the-ball provocation, and midfielder Eduard Atuesta was sent off with a straight red in first-half stoppage time for what officials determined was an intentional headbutt on Club America goalkeeper Guillermo Ochoa.

The latter incident began as a result of a no-call from head referee Juan Calderon, who waved off LAFC appeals for a penalty on Atuesta following a high boot from Club America midfielder Richard Sanchez at the top of the 18-yard box. Atuesta remained on the ground as play continued further up the field, and Ochoa raced over to the fallen Colombian and got in his face to berate him.

Ochoa remained reproaching Atuesta from that position for several seconds, and proceeded to go down in a heap to sell contact when Atuesta appeared to make contact with netminder as he tried to get up.

A slow motion replay showing a different angle appeared to show Ochoa put his hand on the back of Atuesta’s head as Atuesta attempted to stand, flicking Atuesta’s head at the same time he collapsed in a heap, doing his best to give the impression that Atuesta headbutted him.

Hey @Concacaf you don’t have VAR
but you also won’t allow an APPEAL to this low level debauchery???

You almost lost @LAFC this game but now you are impacting the next game because of these shenanigans?!

None of this adds up but you do have 48hrs to fix.pic.twitter.com/RmBlW4JBkl

“I have gotten a lot of text messages from people who have seen replays, from people who saw exactly who initiated the problem between Ochoa and Eduard,” said Bradley. “I was told by many people that Eduard did not do anything. I have not seen it yet, but I got so many messages.”

Tensions were high and tempers were flaring shortly after the controversial incident that left the MLS side with 10 men, and that led to another coming together between LAFC assistant coach Ante Razov and Club America head coach Miguel Herrera. The two argued intensely shortly after the halftime whistle, and Herrera at one point grabbed Razov’s hair before the American delivered a blow to the Mexican manager’s face that appeared to leave Herrera with a bloodshot eye that was noticeable in the second half.

Here’s Miguel Herrera getting way too handsy w/ LAFC assistant Ante Razov & caught a jab for his trouble. Ante Razov is NOT the one. Herrera got off light.

Herrera was ejected, then tried watching in the stands, then got kicked out of there.

“These are things that happen in a game, and I imagine even more so in a semifinal like the one we played today,” said LAFC midfielder Jose Cifuentes in Spanish. “…It is part of the game. It is part of the adrenaline when all the players are heated, when the coaching staffs on the outside are heated. It happens in soccer and today was no exception.”

Ultimately, Bradley’s side overcame all of Club America’s gamesmanship, including the ejected Herrera’s forbidden efforts to communicate to his bench in the second half from the stands via the use of a walkie talkie. Carlos Vela bagged a brace immediately after halftime, and that helped LAFC punch its ticket to the title game vs. Tigres UANL on Tuesday.

Still, this semifinal will likely be remembered as much for the chaotic events that happened at the end of the first half as anything else.

“That type of emotion, that type of passion, it comes out in big rivalries,” said Bradley. “You could feel that tonight.”