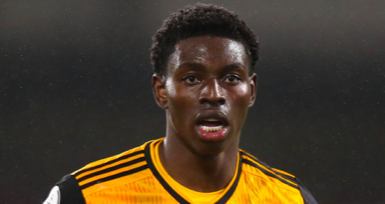 Owen Otasowie made it consecutive Premier League appearances for Wolverhampton Wanderers on Monday, impressing in his first start for the club.

After making his senior league debut for the club last week, the 19-year-old midfielder started at Burnley on Monday, playing 60 minutes in a 2-1 loss to the Clarets. Wolves scored a late penalty kick through fellow youngster Fabio Silva, but unfortunately suffered its third defeat out of the past five matches.

Otasowie has mainly featured for Wolves U-23 team during his time with the club, but since has found himself garnering more opportunities at senior level for Nuno Espirito Santo’s side.

“Owen did well,” Santo said post match. “He’s a good player. He’s strong, he’s physical and he’s very young, but he’s growing, he’s improving a lot of aspects of his game that he still has to learn, but he’s got a lot of talent.”

“He had a tough game today, but he handled himself well, and he’s going to be back in the future.”

Otasowie completed 87% of his passes in the match, while also holding his own a physical Burnley squad. He also completed four of his seven aerial battles in the match, made six recoveries, and earned two fouls.

The U.S. Men’s National Team midfielder has not only seen his stock rise at club level, but also internationally in Gregg Berhalter’s side. Otasowie made his senior debut for the USMNT in November which has since seen him make his first two league appearances for Wolves.

11th place Wolves next host Tottenham on December 27th before visiting Manchester United on the 29th, two major opportunities for Otasowie before the new year begins.