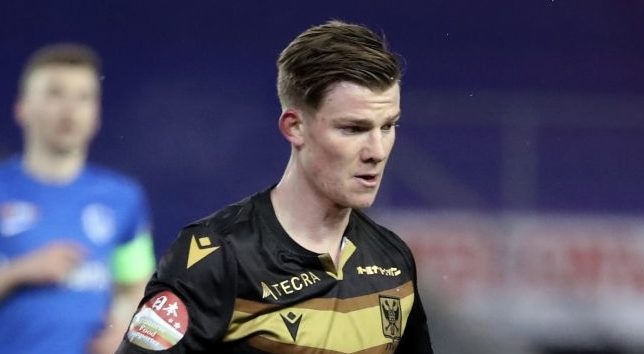 Chris Durkin took another major step forward in his European development at Belgian side Sint-Truiden, helping the club fight off relegation worries to stay in the top flight for another season. Despite the club finishing just outside of the bottom two, Durkin admits it was a tough second season for him in Europe.

Durkin made the move to Sint-Truiden in 2019 from D.C. United, and since has become a regular contributor for Peter Maes’ side. The 21-year-old midfielder saw his playing time more than double in 2020-21, finishing with 28 league appearances and just under 2,000 minutes of playing time.

Now with the domestic season and another year of top-flight football right around the corner, Durkin reflected on his two years in Belgium from the United States.

“It was a stressful and difficult season,” Durkin said in an interview with Voetbal Krant.

“But I am in Europe for that. I want to feel this challenge, although I have never really felt the danger of relegation.”

Durkin is one of several U.S. Men’s National Team players trying to figure their way out in Belgium, joining Mark McKenzie, Matt Miazga, and Ethan Horvath in the current contingent. After seeing his playing time decrease in MLS with D.C. United in 2019, Durkin embarked to Europe and forced his way right into the mix at Sint-Truiden.

His versatility as a midfielder was on display, seeing time at the No. 6 position, as a left and right midfielder, and also as a right back at times defensively. Durkin picked up one goal and one assist, but most importantly continued his overall development as a player.

Durkin credited his manager Peter Maes for keeping him at a position he is familiar with and is constantly working to play in other roles for the good of the club.

“I had a hard time finding my place and my game identity because I played in different places,” Durkin said. “My versatility is an asset, but sometimes also a disadvantage.”

“Peter Maes put me on sixth and left me there and I think that is my place in the long run. His coaching style is not easy, but he pushes us to improve.”

Now the goal for Durkin will be to rest up and recover as Sint-Truiden tries to improve on its 15th-placed finish this season. Despite losing its last two matches of the season, the club did enough to fight off any worries of relegation to the second-tier.

Durkin impressed in his first full season with the club in 2021 and could see a bigger role in Maes’ squad starting this fall.