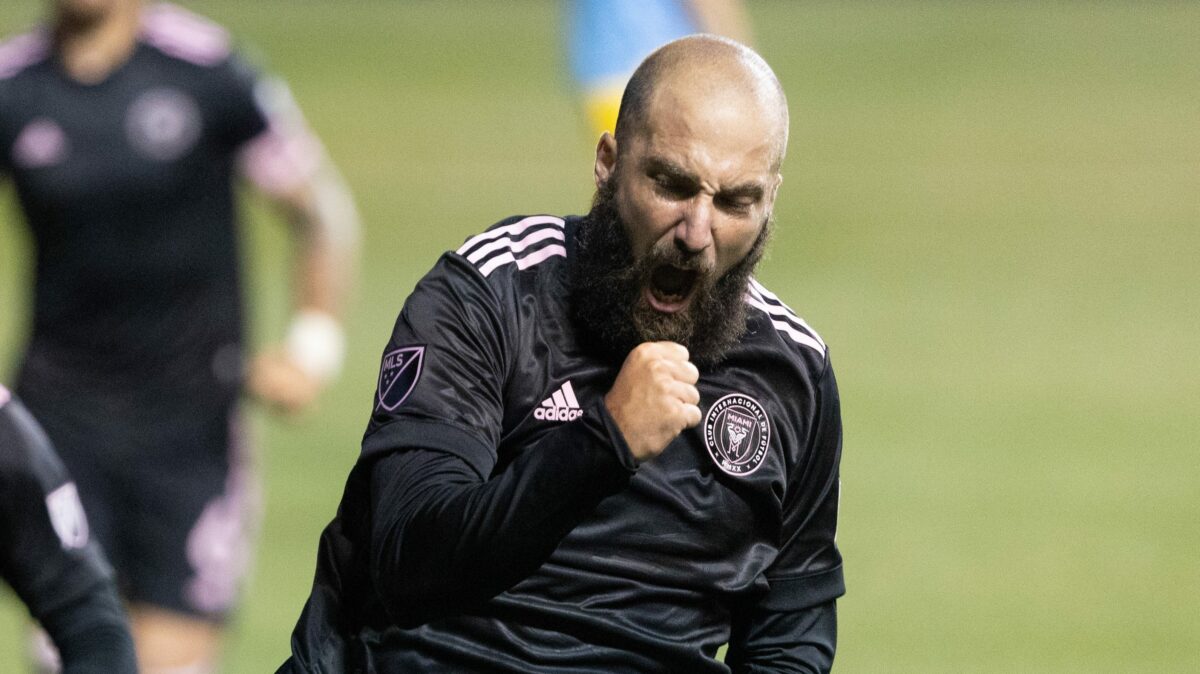 Inter Miami may have just picked up its first three points of the season in dramatic and thrilling fashion, but the excitement of the victory should not completely overshadow what transpired over the course of the game.

Particularly when it comes to Gonzalo Higuain.

Inter Miami was triumphant for the first time in 2021 with a comeback win on the road against the Philadelphia Union on Saturday night, but it did not play very well over the course of the 90 minutes. Inter Miami struggled to create much of anything from the run of play up until Federico Higuain came into the match in the 61st minute as a replacement for Rodolfo Pizarro (more on that later), and one reason for those issues was Gonzalo’s continued habit of dropping into deep positions.

As has been the case for much of his time in MLS, the star striker routinely occupied areas on the field vs. the Union that were further away from goal. Not often enough was he the spearhead of the attack when Inter Miami had the ball, and that limited how much verticality the South Florida side had when it got into the final third.

His frequent decisions to drop into pockets of space to try and get involved in the build-up also robbed Inter Miami of its reference point in the penalty area and made the Union’s defensive job easier. With no center forward taking up those advanced positions or making runs in behind, the Union back line was able to focus more on what was happening in front of them. It is not a coincidence that Inter Miami managed just one shot in the first half, and that came only after Robbie Robinson won a ball high up the field.

Of course, things changed for the better after the hour-mark once his older brother Federico came into the game and began to create more danger, but the question remains as to why Gonzalo continuously opts to remove himself from the parts of the field where he has been most successful in his career. After all, head coach Phil Neville said somewhat recently that he wants to keep the striker in the 18-yard box as often as possible to finish off plays — just like the 33-year-old Higuain did when he netted the equalizer in the 73rd minute.

A possible explanation for why Higuain refrains from staying high is that he does not confide in his teammates getting him the ball in dangerous spots and thus chooses to drop back to get involved in the build-up — something we have seen other former great strikers like Thierry Henry and David Villa do at times during their MLS stints.

Still, Higuain is getting paid a reported handsome salary of $8 million per year to put the ball in the back of the net. He did so Saturday for the second time this season and third since joining Inter Miami in 2020, but that came off a free kick from his brother and extended his run of MLS games without a goal from open play to 11.

If Inter Miami wants to get more out of its attack going forward so as to avoid having to pull rabbits out of hats to win games like it did vs. the Union, Higuain has to take up more advanced spots on the field. He has made a career out of his poaching and finishing skills, and the Herons could certainly use more of that.

Federico Higuain may have come off the bench to help save the day, but another player who turned in a performance that was equally as immense was Nicolas Figal.

Bouncing back from the second-half struggles he endured in the season opener last week, Figal pieced together what may just have been his best showing in an Inter Miami jersey to date. The defender shone at centerback for 79 minutes — constantly breaking up plays with stout play — before moving to right back and giving Inter Miami an added dimension in the attack during the final 11.

The provider becomes executioner, and Federico Higuain has pulled #InterMiamiCF ahead in Philadelphia! pic.twitter.com/VwfrnNUxhE

Not only did the 27-year-old Figal whip in the pinpoint ball to Federico on the winner, but he also showed a great understanding for the game on the play. Figal made a run in behind the Union’s defense in that 83rd-minute sequence to invite a pass from Lewis Morgan, proceeded to calmly maneuver past a pair of defenders rather than hurry a cross, and then picked out a precise pass with his weaker left foot.

“I think Nico has been outstanding since Day 1,” said Neville. “The minute I came into this football club, I saw a player with great growth who could improve massively from last year. On the first day he told me that, so he took accountability for that, and he is someone that is just a team player.

“He is a warrior. He is someone that can play centerback (or) right back and he will give everything for the team and he has got great quality.”

Figal showed that quality again in the dying minutes when he sent in another sublime ball to Gonzalo Higuain, but the ensuing header was saved superbly by Union goalkeeper Andre Blake. Even so, Figal has just raised his stock and may have given Neville something to think about at that right back spot.

One player who was not a key part in the late rally at Subaru Park was the aforementioned Pizarro. The veteran midfielder was removed in the 61st minute after a largely ineffective shift that saw him struggle to get into the rhythm of the game, and his replacement worked wonders.

It is unlikely Pizarro gets benched in favor of the playmaking Higuain for a prolonged period at any point in the near future, but games like Saturday’s only further emphasize the point that Pizarro is just not a true playmaker. The Mexican midfielder can unlock defense, like he did in Week 1 with that immaculately-timed through ball to Gonzalo Higuain, but he is still more a facilitator than a creator. More a No. 8 than a 10.

It has to be noted, though, that he is doing a lot of the dirty work defensively due to striker Higuain’s fitness limitations. Pizarro has often been seen, even as far back as last year, pressing opposing teams all over the advanced parts of the field to try and make their build-out less comfortable. Higuain rarely helps in that regard, leaving Pizarro to have to expend a lot of energy on the defensive side of the game.

That said, he has to be sharper when he has the ball than he was on Saturday. His struggles were part of the reason that Inter Miami did not generate much danger at Subaru Park until the final half-hour, and that just cannot be the type of production you get from a Designated Player.

John McCarthy (6.5) — Solid in collecting crosses and had a very big stop on an angled Kacper Przybylko effort in the second half.

Kelvin Leerdam (4.5) — A bit at fault on the Union’s goal, and did not offer a whole lot in the attack.

Nicolas Figal (9) — After committing a few fouls early on, he was immense defensively before moving to right back and delivering a pair of accurate crosses that set up the winner and almost an ensuing dagger.

Leandro Gonzalez Pirez (8) — Returned to his rock-solid standard at the back with several interventions and clearances, including many aerial ones.

Joevin Jones (5.5) — A decent defensive display combined with some good passing during his 69 minutes, though not much provided to the attack.

Gregore (5.5) — Helped break things up in the center of the park but lacked precision with his passing, especially as the game wore on.

Blaise Matuidi (6) — Not as stout defensively, but was strong in moving the ball and finding teammates in good spots.

Lewis Morgan (5) — Drew the foul that led to the equalizer and helped set up the winner, but he was uncharacteristically quiet for much of the match for a second straight week.

Rodolfo Pizarro (3.5) — A ghost of a performance. Never found the rhythm and was toothless before being replaced.

Robbie Robinson (5.5) — Energetic and willing to try and take on defenders before coming off at halftime with an apparent hamstring issue.

Gonzalo Higuain (5.5) — Got a sweet taste of redemption with his headed goal and improved after his brother came on, but his decisions to drop deep in addition to his lack of running at times stood out.

Jay Chapman (4.5) — Struggled to find the game after coming on at the start of the second half, though he was able to move the ball better during the final 20 minutes and change.

Federico Higuain (9) — The hero of the night. Came off the bench to save the team with some quick passing, a pinpoint assist, and a clinical headed winner.

Sami Guediri (5) — Was solid defensively on the left after coming on to replace a fatiguing Jones.

Victor Ulloa (6) — Hit a good forward pass that almost helped set up a late insurance goal, and was solid in breaking up plays to protect the lead.

Phil Neville (6.5) – Learned from his Week 1 mistakes and made quicker subs, including the Higuain-for-Pizarro move that served as a stroke of genius. The overall attacking display left something to be desired, however.