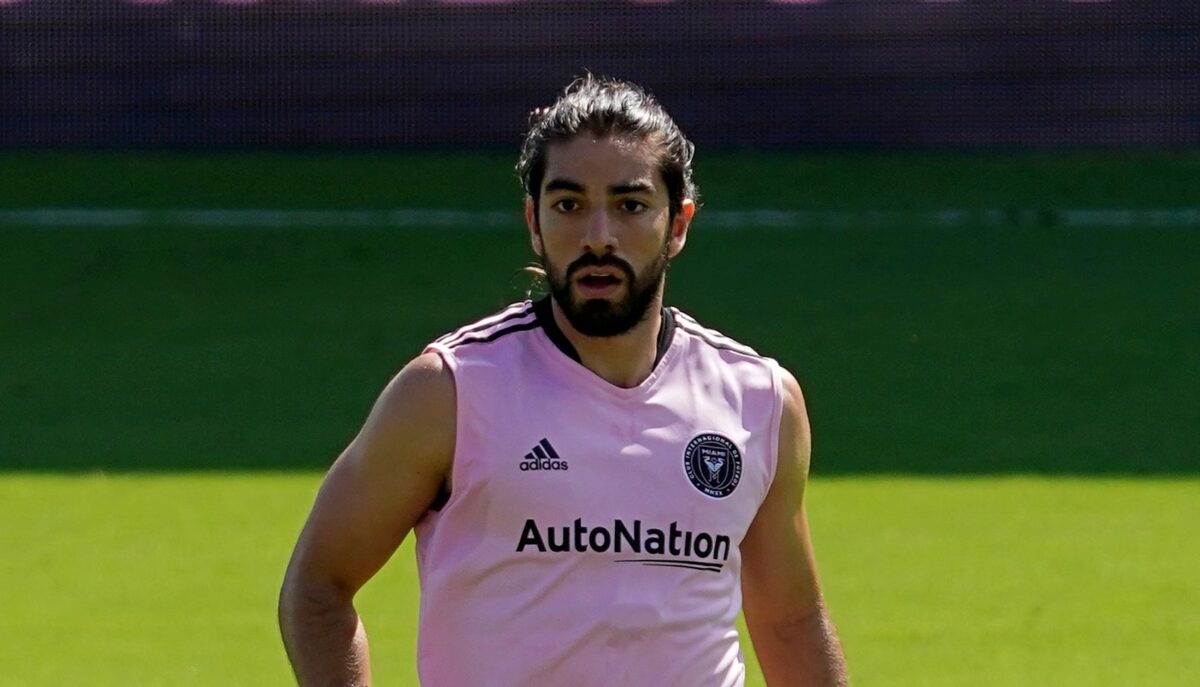 FORT LAUDERDALE, Fla. — Inter Miami may have had both its teams in Sunday’s scrimmage come out in 4-2-3-1 formations, but it seems likely that the team will operate at certain points this season in a 4-3-3.

A key to it all will likely be Rodolfo Pizarro.

Inter Miami finished its preseason preparations over the weekend with an intrasquad game at Pnk Drv Stadium, and one of the more notable takeaways was that Inter Miami’s projected starting group at times morphed out of the 4-2-3-1 look it began the match in and into a 4-3-3.

Pizarro was one of the players that helped change the setup, moving out of the No. 10 role he sometimes occupied to drop into deeper spots and form a midfield triangle with Blaise Matuidi and Gregore when their side was in possession. Wide players Lewis Morgan and Robbie Robinson then moved into higher spots to form a three-man front line with striker Gonzalo Higuain.

Pizarro as a result was on the ball often, and did not frustratingly hold onto it as long as he did at times last year. Instead, he passed quickly and sharply and was very involved in much of what his team did from the run of play.

“Getting Rodolfo on the ball and influencing the game and having a bigger impacts is one thing that we have been working on,” said head coach Phil Neville after the scrimmage. “… I think you saw this afternoon that Rodolfo was around everything. You think about that three in midfield — Gregore, Blaise, and Rodolfo — a lot came through Rodolfo.

“We have been working really hard on that combination, so I am really pleased.”

Neville had said back in February that he wanted to get Pizarro and Inter Miami’s most talented players on the ball often, so it makes sense that the manager would have the Mexican international play a hybrid role of sorts. It also probably better suits Pizarro’s game given that his skill set is not that of a traditional playmaker and that some of the best spells in his career for both club and country have come with him playing more like a No. 8.

Of course, it is only one game and an exhibition at that, but Pizarro looked more comfortable in executing what was asked of him on Sunday. He even scored a nice first-half goal in an overall performance that should only raise Neville’s confidence in using Pizarro like that again once the MLS season begins.

“It is exciting to see him play like this,” said Neville. “I think he plays similar positions for Mexico in terms of a little bit deeper at times where he can be more influential in possession. Ultimately, he is playing in the position that he likes to play in.”

Robinson had been spotted on the left flank at one practice session earlier this preseason, and that is exactly where he lined up on Sunday.

Robinson got the nod on the left wing with the projected starters and scored the opener in that position with a good header, but his overall outing was a mixed display. While he showed a real willingness to go at isolated defenders in 1-on-1 battles down the flank when he had space — including very nicely on one instance near midfield in the second half — Robinson also looked many times like a player that is still adjusting to being moved out of his usual striker spot and into a new position.

He was a bit hesitant and not decisive with his decisions in the final third, did not always look that comfortable, and also should have done better with at least one other scoring chance in the first half. Still, it is his aggressiveness in taking opposing defenders on the dribble that Neville seems to think can help make Robinson a good option out wide.

“I think what Robbie Robinson provides us is a real attacking threat down that left-hand side,” said Neville. “…Robbie is predominantly a center forward, but I think what we see in world football at this moment in time is you see a lot of center forwards that gravitate towards a side of the pitch.

Whether Robinson can evolve into a more impact player on the flank remains to be seen. His skill set certainly seems better suited for that part of the field, but he still has a lot to work on and learn if playing on the outside is to become second nature for him.

“You have to come back a lot deeper when you are playing the left wing role and you kind of have to mark the center mid and also try to cut off the pass to the right back,” said Robinson. “It is a balance that you have got to find and it is actually a lot more running than striker, too, because you have to make that run forward and you have to get all the way back and help cover your left back. That is the main difference I would say.”

If there was one player who really stood out on the team of projected substitutes, it was Edison Azcona.

The 17-year-old winger not only scored his side’s only goal in the first half with a relentless press that forced veteran Nicolas Figal into an ugly turnover inside the penalty area, but Azcona also looked full of confidence during his 45 minutes on the field. He opted to take a shot from distance in the first half in a sequence that someone else his age may have opted to play safer, and regularly looked dangerous with the ball at his feet.

He still has to improve physically, which is understandable given his age and flattering 5-foot-6 frame, but there are some very good starting points there for Inter Miami to work with.

“He has got something a little bit special,” said Neville. “When you saw him today in the lineup in the tunnel you think, ‘He’s just small,’ but he is tough and he is strong and he is aggressive and he never gives up. He was disappointed to come off at halftime and that is what I loved about him.”

“If he keeps working hard — and that is a big challenge — and if he keeps his determination and if he keeps developing he hopefully has got a big future at this football club,” added Neville. “You think about developing our own players, he is definitely one that is part of our thoughts.”

John McCarthy — Made the saves he had to make and was only beaten from in close after a mistake with the ball by Nicolas Figal.

Kelvin Leerdam — The better of the two new fullbacks, he got forward well and finished his great look with aplomb in the second half.

Nicolas Figal — Solid for much of the game, but was at fault for giving up a goal after overconfidently dawdling on the ball and losing it to the smaller Azcona deep in the penalty area.

Leandro Gonzalez Pirez — His usual solid performance at the back. Rarely troubled and picked out a couple of very good passes.

Joevin Jones — Solid if unspectacular. Did not get forward as often or as effectively as Leerdam, though that may have been due to his partnership with adjusting left winger Robinson.

Gregore — A couple of poor touches, but overall looked good with and without the ball. You expect he will get better the more he gets back into a rhythm after only recently starting team training.

Blaise Matuidi — While he moved the ball fairly well, there were still at least a couple times where he left something to be desired defensively.

Lewis Morgan — One of the best players on the field. Assisted on Robinson’s goal, had a low shot saved well, and constantly threatened with his darting runs and service from the right.

Rodolfo Pizarro — Looked far more comfortable in his hybrid midfield role, getting more touches and passing quicker than he did at times in 2020.

Robbie Robinson — His solid header opened the scoring and he was willing to go at defenders, but did not look entirely comfortable in his new role.

Gonzalo Higuain — His class through ball to set up the last goal was one of very few bright spots for a player that often cut a frustrated figure.

Dylan Castanheira — The busier of the two goalkeepers, made some good stops and denied Morgan of a goal in the first half with a kick save.

Brian Rosales — Lost his mark of Robinson on the first goal and looked to have his hands full defensively.

Ryan Shawcross — Sturdy at the back and good in the air, did not have any real issues during his 45 minutes.

Christian Makoun — Still unclear if centerback is his best spot. Got beaten badly by Pizarro on the second goal.

Sami Guediri — Showed some good things technically and with the ball. Looks to have a future with the first team down the road.

Harvey Neville — Moved the ball decently, including via some nice cross-field switches, but why he started when he is just visiting is unclear.

Victor Ulloa — A typical performance. Lots of hard work in midfield while not overwhelming anyone.

Josh Penn — Energetic and worked hard, but did not make much happen.

Federico Higuain — A poor overall showing, though he came close to making it 3-2 with a splendid free kick that was denied by the post.

Edison Azcona — The bright spot on his side, he looked fearless and confident. His well-taken goal was a result of his pestering press.

Matias Pellegrini — Looked sharper than he did for much of last year, though he still seems to be lacking some quality.

Aime Mabika — Sturdy after coming on at halftime, including in some 1-on-1 duels.

Patrick Seagrist — Made a late cameo and buzzed around.