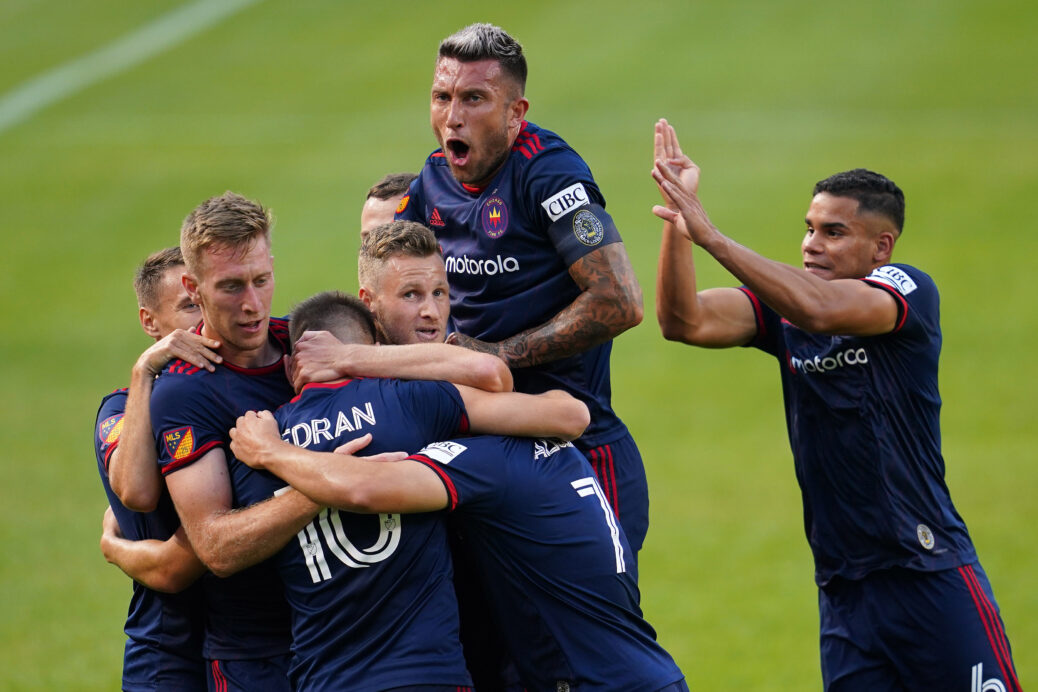 When 2020 began, the Chicago Fire were set up for a special year, but the COVID-19 pandemic changed all that, and instead of a breakout 2020 with a revamped team and new look, the Fire and its roster full of new faces endured a challenging season on multiple fronts.

With a new billionaire owner, a fresh rebrand, and a return to the city’s iconic Soldier Field, the expectations were that the Fire would be elevated in one of America’s best sports markets, and incoming manager Raphael Wicky was crafting a team worthy of the hype.

Money was spent on the team, but the rebrand fell flat and is under construction once again. The benefit of moving to a better, more accessible venue was canceled out by COVID-19, and the team fought hard only to miss 2020’s expanded playoff field by a mere point.

In a normal year, there would at least be the connection between the team and its die-hard fans, but nobody, at least in-market, got to see their revamped team perform.

It had an effect on the players, especially the long list of MLS newcomers.

“It was everything, new, for all of us. I was for first time, alone for 11 months without my family, without my friends. Nobody in America,” striker Robert Berić told SBI. “I didn’t play a game at home with the fans. With the feeling, to play with your fans in your stadium…I’m really excited, even for this 25% (capacity) or how much we will have this first game against New England. I’m happy the fans are coming back. I think everyone on our team is happy. This is why we are playing football, to have this adrenaline.”

Watching both of 2020’s expansion teams make the playoffs was tough for all of the teams who missed the cut, but there is reason for Fire fans to be optimistic because effectively, the team resembled that of an expansion side.

Now, the squad has a year of continuity under its belt. Take any of the five games Chicago lost by one goal last year, fix that mistake, and you’d be talking about a pretty impressive triumph for a new group enduring the bizarre season.

“It was not a normal season, that’s for sure. But in the end, I saw the structure, I saw the teams, and I see that the league is quite equal.” said Berić.

“Everybody can beat everybody,”

Were the Fire only contenders in an expanded playoff field, or are they the real deal looking heading into 2021? We will soon find out, but Fire fans can find some optimism when they consider how well the team played down the stretch last season.

Here is a closer look at the 2021 Chicago Fire:

The Fire have a well of young South American talent at their disposal. 22-year-old Ecuadorian Espinoza is a defender who will get some looks in the right back spot and should be looking to begin his rise and push for the starting spot in the near future.

Pressure is On: Jonathan Bornstein

There is always room for improvement on an 11th-place team, and while there are a couple of key position battles in the fight to make the Chicago starting XI, Bornstein’s with Miguel Navarro is the one to watch in the left back position.

Not picking on the crafty veteran for no reason, though.

Last year, Bornstein earned more starts and was more productive with a goal and assist, but you get the sense the 36-year-old will be making way for Navarro, 22, who was one of Wicky’s very first signings. Any early trouble will see the change come sooner.

Coming out of the gate, Chicago will be shorthanded. At its best, it can certainly be a playoff contender again in the Eastern Conference.

That prediction is with attrition in mind, the Eastern Conference is volatile, several teams from last year’s field will fall out, and the Fire have every right to be there knocking to round out the field.

Last year’s mistakes cannot be overstated. As mentioned, five one-goal losses combined with eight draws to miss the playoffs by a single point means that a fortunate bounce here or there would exponentially raise the expectations for the year that lies ahead.

The theme at the time of this writing is, unfortunately, a lot of talent is on the injury report.

The team still has a little over a week to progress, but is definitely going to be without the key players below for some time.

Wicky says he is happy with the roster as-is though, and if that is the truth, the team will not be making any shotgun signings to compensate for the early depth issues.

“I’m very, very happy with the depth of the roster and the quality of the roster.” He said. “I think it was three weeks ago, those guys were not injured, and I was very happy. Right now we have these injuries, so it makes you a little bit thinner. But there’s also rules here. You cannot go and buy every time…I hope that these guys come back sooner than later, and then, I believe we have a strong roster.”

In the attack, Berić showed that he was able to rise above the circumstances as a newcomer in 2020, to the tune of 12 goals in 23 appearances. A tally which was good for second in the golden boot race.

He will remain the heavy in that regard and 20-year-old league newcomer Chinonso Offor will be the one backing him up as a true center forward option.

In regards to the attacking supply, one thing Berić had last year which is a question mark in the season ahead: Djordje Mihailovic, and who will replace him as the key playmaker?

Alvaro Medran is the best equipped to handle attacking midfield duties, but if he is deployed deeper in midfield rather than pushed forward, then the playmaker duties could fall to Ignacio Aliseda, who struggled in his first season in MLS, but could be poised for a breakout campaign.

“In the end, it is more important how we as a play as a team.” Berić said. When we are playing good. It doesn’t matter who’s gonna score or who’s gonna assist. The most important thing is that we are winning,”

In 2021, there will certainly be space for someone to step up and be the go-to playmaking option. A chorus of assist contributors can certainly be the supply Berić is looking for, but if a consistent and effective attacking midfielder doesn’t emerge, then Beric could struggle to duplicate his 2020 success.

While injuries and uncertainty cast a shadow over the attack, the defense and central midfield should provide a stabilizing force. 2020 newcomer and former Real Madrid academy product Alvaro Medran paired nicely with fellow newcomer and DP Gaston Gimenez in the deep-lying midfield roles, and that partnership will be crucial in controlling the team’s tempo once again, assuming it is kept together.

Gimenez will need some cover for international duty with Paraguay, and there is an interesting story developing for the plan there.

Johan Kappelhof, the team’s longest-tenured player, has been preparing to take the reins as a defensive midfielder this season despite historically being a centerback.

“It’s not natural, but I’ve played there in the past,” Kappelhof told SBI. “I can play that number 6 in my way, different than other guys would, more defensively, I’m the guy who goes for separate balls and will try to win duels, I’m a totally different player at that position,”

In the center of the backline, mainstay Francisco Calvo will be paired with Mauricio Pineda, who looks ready to stay at centerback after starting his rookie season as a defensive midfielder.

At left back, Navarro’s good showing as a newcomer last year could help him win the starting job from Johnathan Bornstein. There is another position battle to be found on the right with the aforementioned Espinoza looking capable of taking minutes at the very least from Boris Sekulić.

The initial XI when the Fire host the New England Revolution on April 17 will show where Wicky sees his defensive youngsters. Of the two, Navarro has an MLS season under his belt and is more likely to get the nod, but the best could be yet to come and his development could be prioritized while Bornstein holds it down.

In goal, Kronholm is still working his way back from an ACL surgery, so Bobby Shuttleworth will be the clear starter to kick things off. The job should be his to lose, and he should be motivated to earn that security before Kronholm is back to playing shape.

Overall, it is important to temper expectations. A solid conference showing and 5th or 6th place finish would exceed expectations, but if you ask the star striker, the confidence is there to win now.

“Your name is there forever if when you win trophies. MLS, or any other cup,” Berić said. “Let’s say maybe this year, we will see. Maybe we will have a good start of the season and have good results in the cups…maybe we can win. That would be the biggest pleasure for me.”