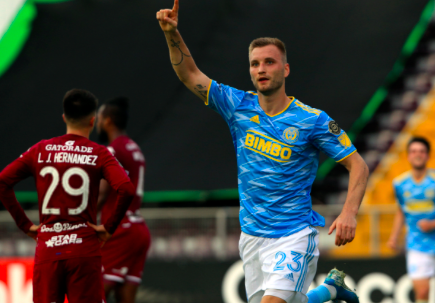 Deportivo Saprissa has normally been a home favorite in its Concacaf Champions League history, but the Philadelphia Union looked like the seasoned veteran after fighting its way to an impressive first leg victory on Wednesday night.

Jim Curtin earned his 100th career win as head coach of the Union as the MLS side captured a 1-0 Round of 16 result in Costa Rica, going toe-to-toe with one of the region’s top teams. Despite Saprissa coming in on a seven-match winless run in league play, the Union did enough to take them out of their comfort zone and earn a first-ever win in the competition.

“Overall I felt we played a really good match tonight and I have to give a lot of credit to my players for how they handled themselves in this type of game,” Curtin said post game. “We fought very hard tonight in a stadium which normally is one of the places you don’t want to be the opposing team in.”

“I felt we did good of pressing them high up the field and sticking to the way we want to play. Our defensive players did excellent tonight and did well to frustrate them and make it hard for them to get any dangerous chance on goal. Andre [Blake] made saves when he needed to and now we return home with an important lead.”

Even without key attacking players Sergio Santos, Cory Burke, and Ilsinho, the Union did well to keep Saprissa on the back foot and pressure them, not just sit back and defend. Kacper Przybylko’s first-half header came from a defensive breakdown by the Saprissa backline, but overall it was a good finish from the Polish striker who recently just featured back in training sessions due to injury.

Oliver Mbaizo’s sensational cross was put away by Przybylko, which proved to be the only goal the Union needed to claim a first leg victory. Jose Martinez was his normal aggressive self, protecting the backline and also covering a lot of ground while Leon Flach made his competitive debut for the club in the 4-4-2 diamond.

It was a long list of impressive performances for the Union players, who kicked their season off in winning fashion.

“I thought Leon did very well tonight in his competitive debut and I think there will be more to come from him down the road,” Curtin said. “He fits in perfectly in the left side of the diamond and can protect Kai [Wagner] when he goes upfield. Leon can also get upfield himself and make himself available in the final third. Overall, a good debut for him and I’m proud of him for delivering in his occasion.”

“He played a lot of the same system in Germany so I expect him to get even more comfortable as time goes on,” captain Alejandro Bedoya said about Flach. “I think he is a good talent and will continue to have his chances as we work into the heart of our season. He did well today and now it’s about carrying that into the next game.”

Another major positive for the club is that Wagner wasn’t hurt in the final moments of the match after Ricardo Blanco only saw a yellow card for a dangerous sliding challenge. Blanco was one of five combined players to see a yellow card in the scuffle that ensured in San Jose, but the midfielder could face additional punishment from the competition’s disciplinary committee after a full review.

The incident certainly adds more fuel to the fire ahead of next week’s second leg at Subaru Park, but the Union will be confident after just handing Saprissa a fifth-ever home loss in the CCL tournament.

“I am proud of my players for trying to get out of the situation after it had happened,” Curtin said. “It looked like a red card to me and thankfully Kai wasn’t hurt on the play. It’s going to be a fiesty affair, but we just have to take care of what we can control now and that is the second leg at home.”

All-in-all it was a solid first performance of the season for the Union who will now refuel and recover ahead of an April 14th showdown with Saprissa once again.

“For our first game of the season, I think we did pretty well and didn’t shy away from this type of game,” Bedoya said. “Full credit to the team for giving all they had tonight and making things difficult for them in a place that normally teams don’t win at. Now we have to focus on how to frustrate them again at our place.”