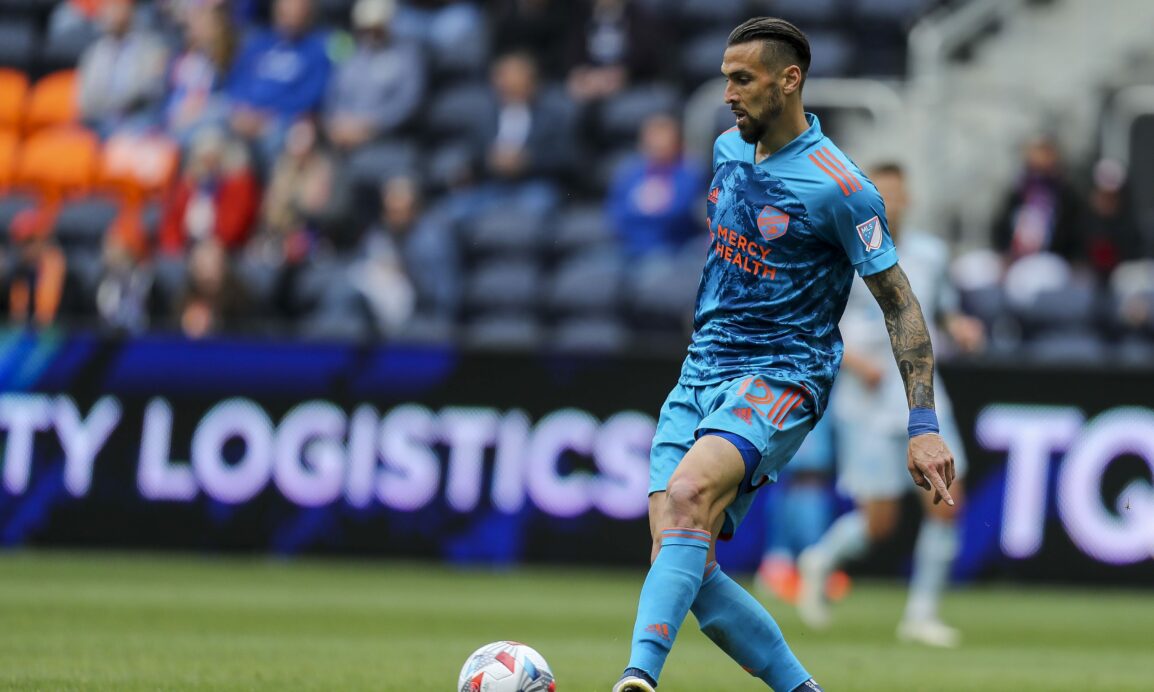 The growing pains of FC Cincinnati seem to be ever-present six games into year three and fans of the team are left with trying to reconcile scheduled losses with tangible progress.

In Saturday’s 1-0 loss to the New England Revolution, that crossroad existed as the team looked hopeless in the opening phase but grew into the game to make it a respectable even if disappointing performance.

Being responsible for a 1-4-1 line so far in 2021, you could point at second-year head coach Jaap Stam as an easy target to beat upon. He’s the third full-time coach of the team in as many seasons, though.

Whether he earns staying power or not remains to be seen. Either way, expectations of a playoff contender in 2021 have been certifiably tempered at this point. It is also evident that expectation was unwanted in the first place.

“To say starting this season ‘Okay, yeah, now this is the season. And now we’re definitely going to be ending up in in the playoffs or close to that, you know, that’s a little bit of a difficult to thing to say, because if you say that, then yeah, everybody wants that.” Said Stam. “If you say that, that it’s definitely going to happen, then people expect that as well. And that’s the thing that we need to be cautious of as well,”

To be fair, you cannot pin a quote on Stam himself from the preseason broadcasting anything more than an earnest effort to contend for the playoffs. The coach is aware that he’s ultimately the one accountable for the lack of points though, and the losses are not doing him any favors.

“As a sportsman, and for myself, you always want to win every game. That’s, I think, for every player, and everybody who loves the club, that’s the same thing. You always want to go every game.” Stam said. “And that’s what we’re trying to do … But you can also see, the last game that we’ve played, we’ve been facing very good teams as well, which are not easy to to beat and (teams) that we need to work very hard to get something out of it.”

But we also know that sometimes it takes a little bit of time, but time, that’s the thing that we don’t really have always in soccer. And that’s a thing that I understand as well.”

Was there progress in Saturday’s defeat? That depends on your rubric but it could be argued.

Going into the game, it was not advisable to wager that last place FC Cincinnati was going to push the Eastern Conference-leading Revs around. A draw would have morally been a victory all things considered.

They made New England work for it, and continued an experiment which has shown flashes of promise.

When the team picked up its first win of the season last week against CF Montreal, it was in part the product of an uncharacteristic 3-5-2 formation that features newcomers Geoff Cameron and Gustavo Vallecilla, as well as Caleb Stanko in the backline. That same tactic was deployed on Saturday and it took 70 minutes for New England to find the difference maker from a set-piece.

In that back three, Cameron represents the anchor. Stanko, being a historically midfield-minded player, and Vallecilla, 22, working through plenty in addition to being a youngster on loan fighting for his landing spot leaves some room for grace.

“It’s a work in progress. The more minutes guys get with one another, the more training, the more guys get to know each other’s habits, I think the better it will be,” Cameron said. “I think Caleb’s done a great job since he’s come in and filled that role. And Gustavo is obviously adapting to a new country and new players and learning English. There’s a lot of things that you can say are difficult to adjust to another country, to a new team, and a new club. I think all that is a part.”

You get the sense that the team is growing into one which can be defensively sound, but that will not fix the glaring issue.

There are six men currently tied for the team lead in goals so far in 2021. Their tally: one.

Offseason headliners Brenner and Luciano Acosta are both riding five games scoreless now. The looming departure of Jürgen Locadia will not help that. Given that he’s one of the several well-traveled strikers to come through the doors in Cincinnati only to watch his stock plummet, it is impossible to be sure that his replacement will guarantee improvement.

Production from anyone would have meant a late equalizer on Saturday as the team stayed engaged and made the game nervy for its heavyweight opponent.

“I thought we had that belief today. We went a goal down, we pushed, and we had some opportunities to get ourselves back in the game. So for me, that’s a good sign because we’re showing you that we still have fight and we don’t want to give up, and we want to keep giving everything we’ve got and we’re not going to roll down easy.” Cameron said. “It’s not going to be easy for teams. But in saying that, we need to be a little bit more deadly, more ruthless on both sides of the box and and have that attitude to be resilient and to keep fighting.”

The 5-0 and 3-0 margin losses have been out of the picture since Cameron’s arrival and there are still ways to go before that fact suggests the team is decidedly turning things around.

Only midfielder Allan Cruz and defender Ronald Matarrita, both for Costa Rica, will be departing for international duty as the team eyes in on its next run of matches.

Still looking for its first win at TQL stadium, FC Cincinnati hosts the Colorado Rapids on June 19 on the other side of the break and follows that by traveling to fellow struggler Chicago Fire on June 23.