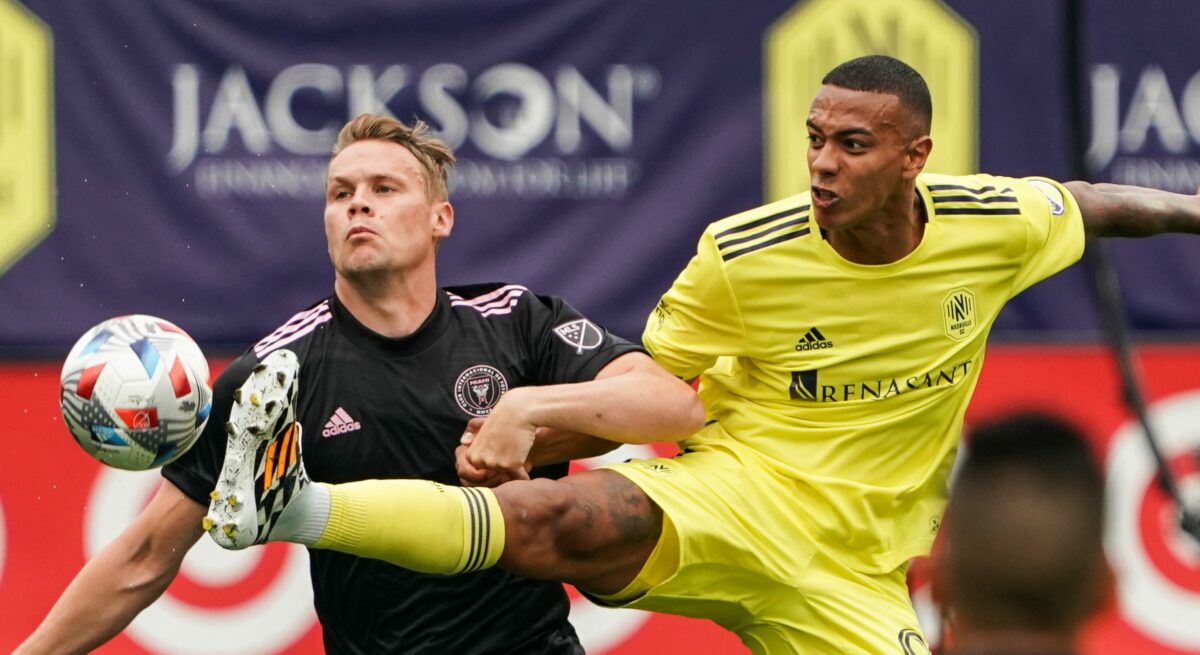 Inter Miami has played six halves of soccer this season, and one of the trends we have seen start to develop under new head coach Phil Neville is improved defensive play.

Inter Miami went on the road and picked up another point in a scoreless draw with Nashville SC on Sunday afternoon. The South Florida side was notably shorthanded, but still managed to get a result in large part due to some more organized, smart, and determined defending.

As has been the case in all but the second half vs. the LA Galaxy in the season opener, Inter Miami was good at keeping its shape and being tough to break down. Nashville SC’s precious few scoring chances on Sunday came in transition rather than through patient build-up — a testament to how good the depleted Herons were at both limiting the spaces the home side could play in in the final third and avoiding giving up the type of numerical advantages that attacks like to thrive on. Players put in a lot of the dirty work, staying mostly tight to their marks and remaining disciplined.

It was a real committed effort from the entire team, a big change from much of what we saw from a very disjointed Inter Miami last year, but the play of new centerback tandem Ryan Shawcross and Leandro Gonzalez Pirez was instrumental in this Week 3 encounter. The two veterans were the team’s best players in the match, with both coming up with several timely interventions and excelling on aerial balls en route to helping post the first cleansheet of the Neville era.

“In a strange way it was probably the performance I enjoyed the most out of the three we have so far,” said Neville. “We had to show qualities that maybe people outside the club did not think that this team or this squad had in terms of fighting, togetherness, spirit, and having to dig deep at moments.”

It should be noted that Shawcross’ performance was the best of the bunch in this one. The Englishman not only came up with a game-high nine clearances and two interceptions in his first MLS start, but also had the best passing completion rate of any Inter Miami’s starter at 91.7 percent. He was as pivotal as anyone in Inter Miami’s ability to record a shutout while also helping the team piece together its fourth and fifth halves of solid defensive play in 2021.

“The main thing today was the cleansheet,” said Shawcross. “I do not think the club has had too many cleansheets over the last season and so far this season. It is important for us to rack them up because if you want to be a successful team you have got to have cleansheets.”

The Herons still need to find a way to get more out of their attack, but things should improve when the players that were absent vs. Nashville SC become available again. Even so, the defense has demonstrated it can lead the way if needed.

NEVILLE TOOK A RISK WITH ROBINSON

Robbie Robinson may have passed all his physical exams before Sunday’s game and might have told Neville he wanted to play. Still, the young attacker should not have seen the field.

Robinson made it only 12 minutes into his second-half substitute cameo on Sunday before re-injuring the same left hamstring that he tweaked a week prior. The young attacker did so on a very similar play as in the match against the Philadelphia Union— a long dribbling run down the left flank — and Neville said afterwards that the team did not push Robinson to take part in the Week 3 affair.

Neville also stated, however, that the team did “modifications” to Robinson’s training regimen throughout the week — a clear sign that the 22-year-old winger was not 100 percent healthy. Putting Robinson in the game then was clearly always going to be a risk, something Neville said he did not want to take with Robinson in the lead-up to the game but ultimately did.

One could argue that Robinson said he was good to go, but players typically want to play — even when dealing with injuries, knocks, and/or concussions. Neville as a former player probably knows that as well as anyone, which is why it was all the more important for him to weigh everything when making the decision on whether to have Robinson travel and play or not. Players may claim they are good to go, but that is not always the case and at the end of the day it is the manager who has the final say.

Of course, Inter Miami had a dearth of attacking options in this one and that could have pushed Neville to use Robinson when he otherwise might not have. That said, Neville took a gamble here all the same and it did not pay off.

SHEA MAKES CASE TO START AT LEFT BACK

Brek Shea made his first appearance of the season against Nashville SC, and all he did was make a case for more minutes.

Shea entered the game at the start of the second half as a replacement for starting left back Joevin Jones, and the American showed better during his 45 minutes than Jones has in his three starts to date. Shea was as defensively sound as Jones was in the opening stanza on Sunday if not slightly better, and also provided more to the attack with penetrating runs and passes into more advanced areas on the wing.

Neville explained after the scoreless stalemate that Jones is still working his way to full fitness. While that is understandable given the timing of Jones’ arrival to preseason camp, the fact that he is not 90-minutes fit combined with Shea’s ability to better get forward and provide more of an overlapping threat should earn the 31-year-old substitute more consideration to start in the coming weeks.

What’s more, Jones has been subbed out of each of of Inter Miami’s three matches this season. That substitution could also be saved if Shea starts getting the nod, to say nothing else of what he might offer the attack.

John McCarthy (7) — His best showing so far this year. Collected crosses well, made a few necessary saves, and raced off his line excellently to thwart a dangerous chance in the first half.

Kelvin Leerdam (5) — Good in his individual duels, but not much offered in the attack again and had a couple lapses that could have proven costlier.

Ryan Shawcross (7.5) — Superb in his first start for the team, constantly playing the ball to safety while being a dominant aerial presence.

Leandro Gonzalez Pirez (7) — A second consecutive strong outing at the back, though his passing was not as clean as it usually is.

Gregore (5.5) — Very imprecise with his passing at times, but was good at breaking things up in the middle of the field.

Blaise Matuidi (4.5) —Subpar showing from the Designated Player. Did not pass exceptionally well and continues to be a bit of a liability defensively.

Lewis Morgan (6) — Looked more like himself here, leading the attack with his trademark dribbles and attempts to make things happen in the final third.

Victor Ulloa (4) — Invisible playing out of position as the No. 10, but did a lot of running on the defensive side.

Jay Chapman (4.5) — The starter with fewest touches (23), he came out strong in the opening minutes before fading hard.

Rodolfo Pizarro (3.5) — Another player who was a non-factor playing out of position. Never found the game as a false 9 and looked uncomfortable.

Brek Shea (6) — Made a case for more minutes with his solid defensive display and surging runs forward.

Edison Azcona (5) — Became the first Inter Miami academy player to play for the first team, but his debut was mostly tame.

Phil Neville (6.5) – Had his side turn in a strong defensive performance with some good moments in the attack despite being shorthanded. The only criticism here is his handling of Robinson.