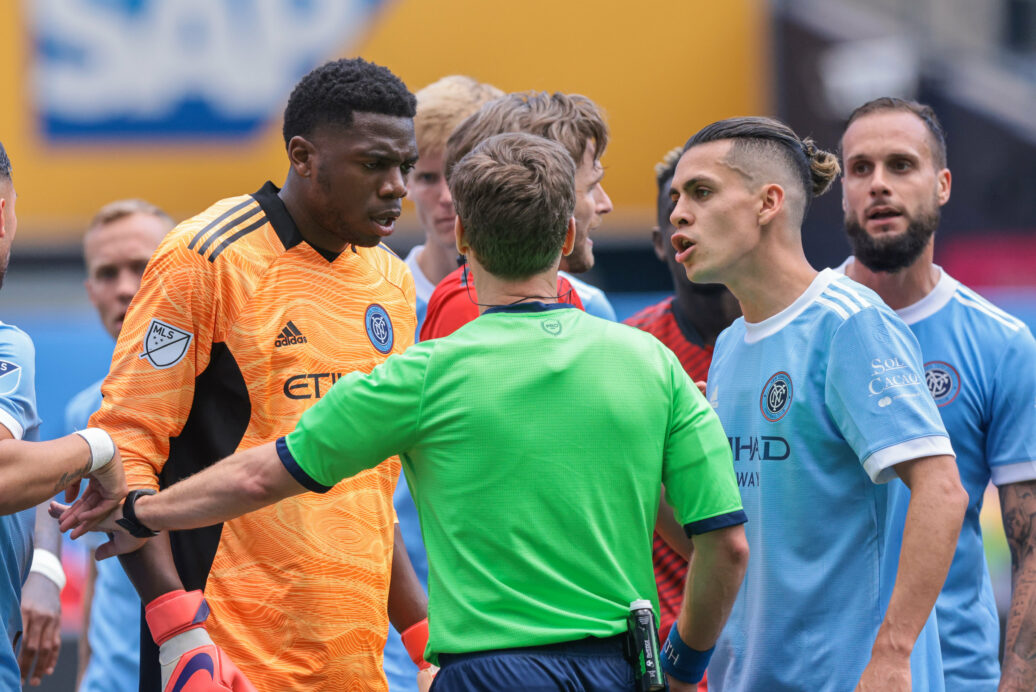 Though a point against a strong Toronto FC side isn’t the worst result, New York City FC felt robbed of its third win of the season Saturday afternoon.

“I’m very sad and feel sorry for the boys as well because they didn’t get three points today,” head coach Ronny Deila said postgame. Having said that, we haven’t lost in four games. Just keep on working, keep on going. Take the positive from the game and try to improve different parts of it.”

Having opened the game’s scoring in the 53rd minute, Jesús Medina appeared to have found his second in unprecedented fashion.

After saving Medina’s shot from outside the box, Toronto goalkeeper Alex Bono moved quickly to get the ball back in play. His attempted punt didn’t reach its destination, instead slammed into the head of Medina who was standing just a few yards away.

The ensuing deflection flew over the remaining Toronto defenders and into the goal, sending fans throughout Yankee Stadium to their feet to celebrate.

Those cheers quickly turned into boos and obscenities when referee David Gantar began blowing his whistle.

Gantar judged Medina as obstructing Bono’s ability to make a pass, thus making the play dead upon impact to the Paraguayan’s head. The decision appeared unfair at first glance, but looking at the play closer Gantar’s call has a lot more merit.

Though Bono left himself little room to get a pass off, Medina certainly made an effort to get a piece of the ball. The 23 year-old had his back turned to Bono as he rushed to the top of the box but turned in time to make a small hop to reach the ball.

Along with his entire squad and the limited fans in attendance, Ronny Deila disagreed with the decision.

“We get 1-0 up, we had good control of the game in that time and I think we controlled it for 90 minutes,” Deila said. “Then of course we get robbed by the ref, that’s for sure. I can’t understand.”

NYCFC crowded Gantar to have their voices heard but the decision was final. The call clearly got into the team’s heads, resulting in the visitors scoring against the run of play just minutes later.

“They are working every day, preparing 24/7 for playing football games and of course when you get robbed in that way then of course you react, that’s human,” Deila added.

With Anton Tinnerholm missing out due to a hamstring injury, Ronny Deila opted to move Andres Jasson to the right wing-back spot in his five-man backline. Jasson, 19, was an interesting choice to replace Tinnerholm as natural fullbacks Tayvon Gray and Chris Gloster were also dressed for action.

Having contributed exclusively in attack throughout his short NYCFC career, Jasson’s debut in defense was a trial by fire. The academy graduate was responsible for marking Yeferson Soteldo, Toronto’s recent designated player acquisition.

Seeing the mismatch, Toronto worked the ball along the left-wing frequently in the first half, allowing Soteldo to take Jasson one-on-one. The Venezuelan international successfully dribbled past his counterpart twice, drew a foul that earned Jasson a yellow card, and registered two of Toronto’s three shots on goal.

Though Jasson was able to keep Soteldo off the scoresheet, he had a tougher time with his replacement. Jacob Shaffelburg had an energetic substitute appearance and made Jasson pay just five minutes after leaving the bench.

Despite three central defenders handling the visitor’s attack, Jasson was caught out trying to help shut down Patrick Mullins. Seeing the open space along the left side, Mullins found Shaffelburg with a well-placed ball, leaving the 21-year old to slot the equalizer past Sean Johnson.

The absence of Tinnerholm forced Deila into the one change to his backline but after ninety minutes on Saturday, the Norwegian head coach could have a lot more adjusting to do next week against Columbus SC.

The hosts were dealt a blow just 13 minutes into the game when Alexander Callens was forced off with an apparent hamstring injury. Sebastian Ibeagha filled in without skipping a beat, but Maxime Chanot would be next to pick up a knock.

After visually struggling with groin pain for the latter half of the first 45 minutes, Chanot fought through and returned for the second half. The 31 year-old continued to look uncomfortable after making plays and eventually reached his limit after an awkward tackle in the 87th minute left him limping into the locker room.

Deila and NYCFC may have to take a break from the five-man defense in week six given the limited amount of healthy center backs. A back four with James Sands and Ibeagha is the likely change unless Deila is willing to give MLS Draft pick Vuk Latinovich his first start against the reigning MLS Cup champions.

Sean Johnson (6.5) – Nearly kept his third clean sheet of the season with a few key saves but was left stranded for Toronto’s 74th minute equalizer.

Andres Jasson (5.5) – Was beaten by Yeferson Soteldo a few times in the first half but ultimately kept the Venezuelan off the scoresheet. Caught out of position on Toronto’s goal, allowing Jacob Shaffelburg to get behind the backline and level the score.

Alexander Callens (N/A) – Played just 13 minutes before being forced off with a hamstring issue.

James Sands (7) – Helped keep Toronto to just three shots on goal and was not at fault for Shaffelburg’s goal after being blindsided off the ball by Dom Dwyer.

Maxime Chanot (7.5) – Even though he was carrying an injury, Chanot did a great job keeping balls out of his box and held on for a majority of the match.

Gudmundur Thórarinsson (6) – Wasn’t asked to do much along the left side but took care of business when called upon. Shot the free-kick that ended up being finished off by Medina.

Nicolás Acevedo (6.5) – Was a presence in the holding midfield position and found forwards with imposing balls.

Keaton Parks (6.5) – Moved the ball well and was the most accurate passer among outfield players on the day.

Jesús Medina (7) – Medina was in the right place at the right time to take advantage of Alex Bono spilling a routine free-kick save and score. He was one of NYCFC’s most aggressive players in attack and wasn’t afraid to test the Toronto goalkeeper.

Ismael Tajouri-Shradi (5.5) – Didn’t have his best performance and was limited to short, routine passes. Nearly scored on a first-half set piece.

Valentín Castellanos (5.5) – Was given a few quality chances to extend his goal-scoring streak to five but failed to find the back of the net.

Sebastian Ibeagha (6.5) – Had a solid outing after being called upon early in the match.

Tony Rocha (N/A) – Created a chance for himself shortly after entering the game but was unable to make a meaningful contribution in his 11 minutes on the field.

Malte Amundsen (N/A) – Amundsen continues to be Deila’s choice for a late-game substitution, playing just 11 minutes this time out.

Chris Gloster (N/A) – Made his NYCFC debut, contributing two minutes off the bench.