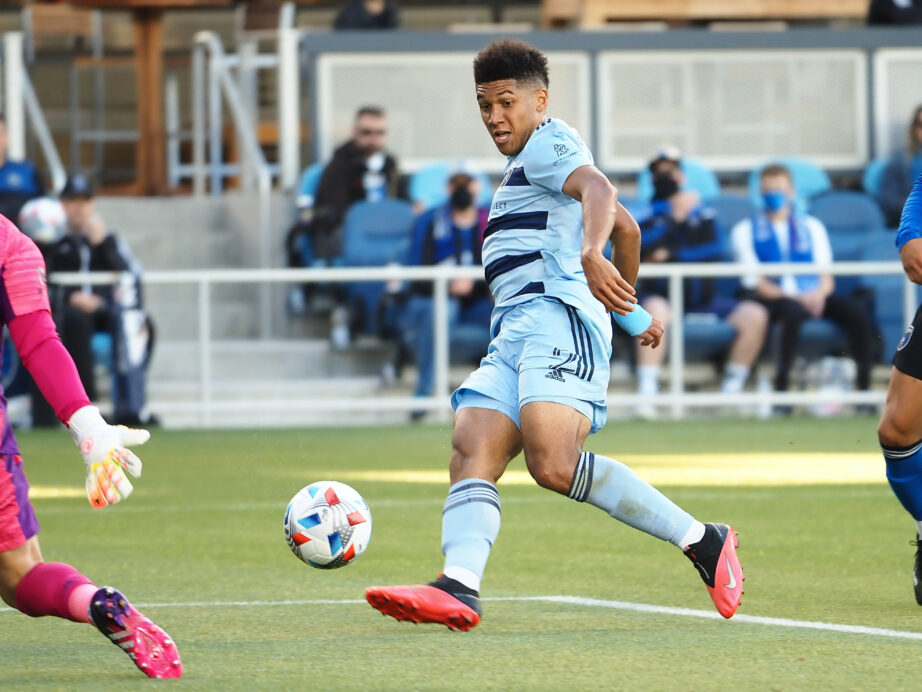 Alan Pulido continues to look like one of the league’s best players this season, and Sporting KC’s younger players such as Kaveh Rad and Jaylin Lindsey turned in strong performances, too. Vancouver and San Jose are far from the toughest opponents, but Sporting KC is maintaining this form with all three of its starting-caliber centerbacks out injured.

Sporting KC lies second in the Western Conference behind the Seattle Sounders thanks to this win.

San Jose manager Matias Almeyda’s rigid man-marking defense, which employs players to man-mark all over the field, has been criticized often. Sporting KC exploited its weaknesses effectively throughout the match.

“When a team plays a man-to-man system like they do, it’s a little bit unorthodox for the players because they don’t normally play that way,” Sporting KC manager Peter Vermes said after the match. “So when you can see it, it can be a little bit different. I thought our guys handled it incredibly well.”

Vermes also said one of his team’s goals this match was to keep the ball as much as possible, which Sporting KC did not quite achieve with 42.6% of possession. As the game wore on, however, Sporting KC found several moments where San Jose players struggled to transition and moved the ball up the pitch quickly.

One of the prime examples of Sporting breaking down the man-marking of San Jose is 21-year-old fullback Lindsey’s first career MLS goal.

While San Jose’s entire back line had been preoccupied with trying to win the ball from Roger Espinoza, Lindsey found a wide open space behind his defender Cade Cowell, who started at striker in this game. Pulido picked up the second ball and sent an inch-perfect pass into Lindsey’s path.

Lindsey, who has seven appearances with the United States Under-20 Men’s National Team, has already earned five starts in 2021 with Sporting KC. He’s shown impressive defensive work this season, but his speed and first touch has been his main strength in the attack.

Tim Melia (6) – Melia could have been in better position on San Jose’s only goal, a fifth-minute top-corner finish from Javier “La Chofis” Lopez off a corner kick. Melia made up for it with a few quality saves in the next 85 minutes.

Luis Martins (5.5) – Martins was a weak point at times on Sporting KC’s back line and a fair amount of San Jose’s crosses came from its right side.

Kaveh Rad (6.5) – Rad’s performance is about as good as it gets from a 19-year-old starting at centerback alongside a central midfielder.

Ilie Sanchez (6) – Ilie held things down in central defense as well as any typical center mid could. This was his third start at centerback and he hasn’t been too much of a downgrade from Sporting KC’s injured starters at that spot.

Roger Espinoza (5.5) – The ball didn’t stay in the middle of the pitch an awful lot, so Espinoza didn’t really have much of a chance to maintain control of possession the way he normally can. He exited in the 63rd minute.

Gianluca Busio (6) – Busio couldn’t quite thread a pass to Espinoza to make the most of a chance in the 31st minute, but he continued to show his quality as the No. 6 in Sporting KC’s midfield.

Gadi Kinda (5) – Kinda had plenty of chances to shoot and completed 83% of his passes, but he was offside on a would-be goal and could have made more of his opportunities in the final third.

Daniel Salloi (8) – Salloi kept playing better as the second half progressed. He showed excellent awareness in finding a wide open Pulido for the 60th-minute goal. He curled a shot into the far post for Sporting KC’s third goal.

Alan Pulido (8.5) – Sporting KC’s play ran through Pulido completely in this match. He made several top-notch passes, assisted Lindsey’s goal and then scored one of the best goals any Sporting KC player has scored yet this season.

Khiry Shelton (4) – Shelton misplaced a few passes and didn’t get very involved in the attack. He’s replacing the injured Johnny Russell on the right side of the field for now.