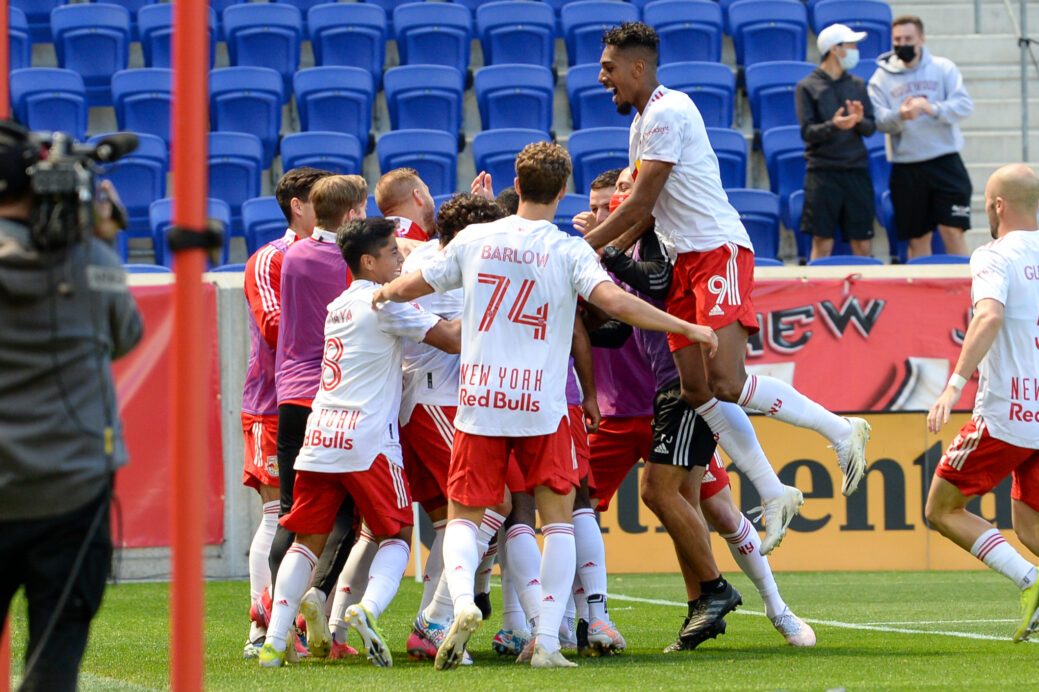 After suffering losses in his first three matches, Gerhard Struber earned his first victory as head coach of the New York Red Bulls on Saturday.

The New York Red Bulls earned a much needed win on Saturday afternoon, topping the Chicago Fire on the back of goals from Cristian Cásseres Jr and Caden Clark. Struber, 47, sees the result as a commencement to the process he’s building with his team.

“The first win gives everyone a very big belief in our way, and especially the performance shows one more time that we are on the right way,” Struber said postgame. “I can see today in our principles; against the ball we make a big step today, our counter-pressing was amazing. Such a brilliant attitude and quick, immediate actions.”

“This is the first step, not more, it’s only three points and we have many to-dos.”

Sticking to the Diamond

Struber learned his lesson from the second week loss to the LA Galaxy, dropping the 3-5-2 formation for the familiar 4-2-2-2 setup. His side looked much more comfortable across the field.

Neither Aaron Long or Sean Nealis were caught out of possession, the latter being active along the left side to clean up when Andrew Gutman found himself up the field. Nealis was quick to react to Chicago’s counterattacks and helped keep Robert Berić off the scoresheet.

Frankie Amaya’s full debut at the No. 10 went well but ended after 55 minutes. Caden Clark moved up the field to that position and scored when Amaya was replaced, giving Struber options at the tip of the diamond when  both are fully fit.

Sean Davis, who looks to be enjoying his role under Struber, was at the bottom of the midfield diamond, making four tackles in a busy 90 minutes.

Though the team was successful on Saturday afternoon, Struber hasn’t ruled out trying new shapes in the future.

“It’s important that we have a good flexibility and variability in our systems,” Struber said. “It’s also a bigger learning curve in the end for boys to play in more shapes that we are uncalculated for the opponents  in every single game.”

Big strikers put to use

With no production from his strikers in the opening three games, Struber opted to replace Brian White with Tom Barlow in the starting lineup. This gave fullbacks a tall target paired alongside the powerful Fábio.

Barlow was a favored option of left back Andrew Gutman, who wasn’t shy to send in a long ball. The 25 year-old forward didn’t always handle the ball cleanly but he set up a clear chance in the first half for Fábio, who saw the opportunity for his first MLS goal rattle off the post.

Though the Brazilian struggled to find the back of the net himself, he began to show his ability in the second half. Fábio challenged and eventually gained possession off a poor touch but had more work to do to get rid of Johan Kappelhof.

After a first touch that sent him wide, a quick turn gave Fábio an advantage on the defender. The eventual cutback was just as effective, buying the forward time to pick out Cristian Cásseres Jr with a perfectly weighted pass.

The 23 year-old forward became a more frequent aerial option as Kyle Duncan and the right side of the field got engaged in the second half. Fábio found space and used his head to grab his second assist, laying off a ball for Clark to volley home.

Kyle Duncan (7) – Was like a new player after looking just a step behind in the first 45. Was aggressive and started completing his crosses as the game went on.

Sean Nealis (6.5) – Had shaky moments when on the ball but was there when called upon to keep the clean sheet.

Andrew Gutman (7) – Very active along the left side, was at times the most offensive-minded player in the first half.

Sean Davis (7) – Held the middle of the park down with several good tackles, was full of energy through the entire 90 minutes.

Cristian Cásseres Jr (7) – Scored with a great run and even better finish. Struggled when asked to work alone on the right wing and making forward passes.

Caden Clark (7) – Found his stride when he moved to the No. 10 position in the second half. Scored by being smart in the penalty area and connecting yet again with a volley.

Frankie Amaya (6.5) – Was clear that he fits in this Red Bulls team but will take time to fully connect with his new teammates on the field.

Fábio (8) – After struggling with his finishing touch, Fábio developed a presence in the second half by picking up a pair of assists.

Tom Barlow (5.5) – Should have scored with a clear-cut chance in the first half, was replaced shortly into the second half by Royer.

Daniel Royer (5.5) – Brought an energy to the team after subbing on but was mostly ineffective with possession.

Dru Yearwood (6) – Was full of energy in his first appearance of the season. Had great ideas for passes in mind but saw some of his attempts fall short short of their target.

Omir Fernandez (N/A) – Got a decent shot off from outside the penalty area but saw just ten minutes in his substitute appearance.

Gerhard Struber (8) – Earned a much needed three points with what seems to be his preferred eleven. His team looked more under control and comfortable after a lackluster first half.