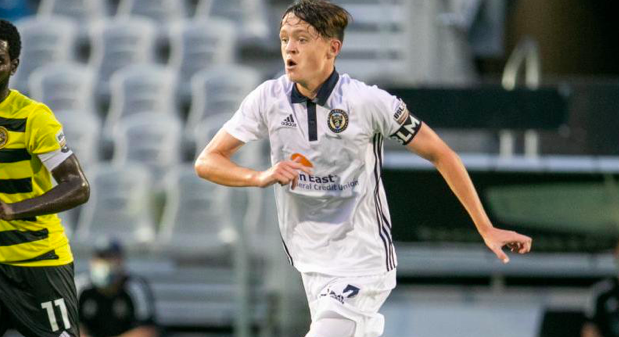 The Philadelphia Union have seen several Homegrown players given a chance by head coach Jim Curtin during his time at the helm and Jack McGlynn became the latest on Saturday in a much-needed first MLS win of the 2021 season.

McGlynn became the youngest Union Hometown player to start an MLS match since Zach Pfeffer, playing 62 minutes in a 2-0 road victory over the Chicago Fire. The 17-year-old has been on the bench for a few matches in both MLS and Concacaf Champions League play and got his first real crack at life as a professional this weekend.

“I thought he stepped on the field [and] was confident,” Curtin said. “I’m really proud of how he helped defensively, especially coming across on the side of the diamond on the weak side and making big tackles and little defensive plays to break up things that really were valuable.”

“In terms of a soccer brain, soccer IQ, he is at as high a level as I’ve seen for a young kid.”

With Jose Martinez suspended for the first of three matches, McGlynn got the start in the Union’s 4-4-2 diamond and did well to make himself available. McGlynn had two good looks towards goal in the opening 15 minutes and easily could’ve scored his first goal if not for a pair of blocks by Fire defenders.

He also saw a header blocked before halftime, but continued to push in helping the Union find a breakthrough goal. Cory Burke and Jakob Glesnes each finished opportunities before McGlynn was substituted off in the 62nd minute, and the youngster got to watch as his teammates finished off the win at Soldier Field.

“The hardest thing to get adjusted to is just the speed of the game, and the amount of pressing the other team does is just a different level,” McGlynn said.

“I was shocked to be that open,” he said about his opportunities in front of goal.

McGlynn looked comfortable in his first MLS start on Saturday, completing 81% of his passes (13/16), winning one foul, and one tackle to go along with the amount of ground he covered in midfield. After registering five goals and three assists with Union II in 2020, McGlynn joined several of his USL teammates with the first team this preseason and hasn’t looked back.

Now with Martinez set to miss this week’s matches against both the New England Revolution and the New York Red Bulls, McGlynn could see his number called once again after impressing in an important result for the Union.

“He was all smiles, and getting a lot of accolades and congratulations,” Curtin said, “And it’s my job to tell him that he should have scored twice, and keep him humble.”

“His ceiling is incredibly high. We thought the time was right to get him a start, and like so many players at a young age, they step up to the bell and they impress you and surprise you more often than not. You have to give them the chance, and Jack stepped up in a big way and did his job for us.”