SBI Spotlight: Leon Flach is making a strong early impression with the Union 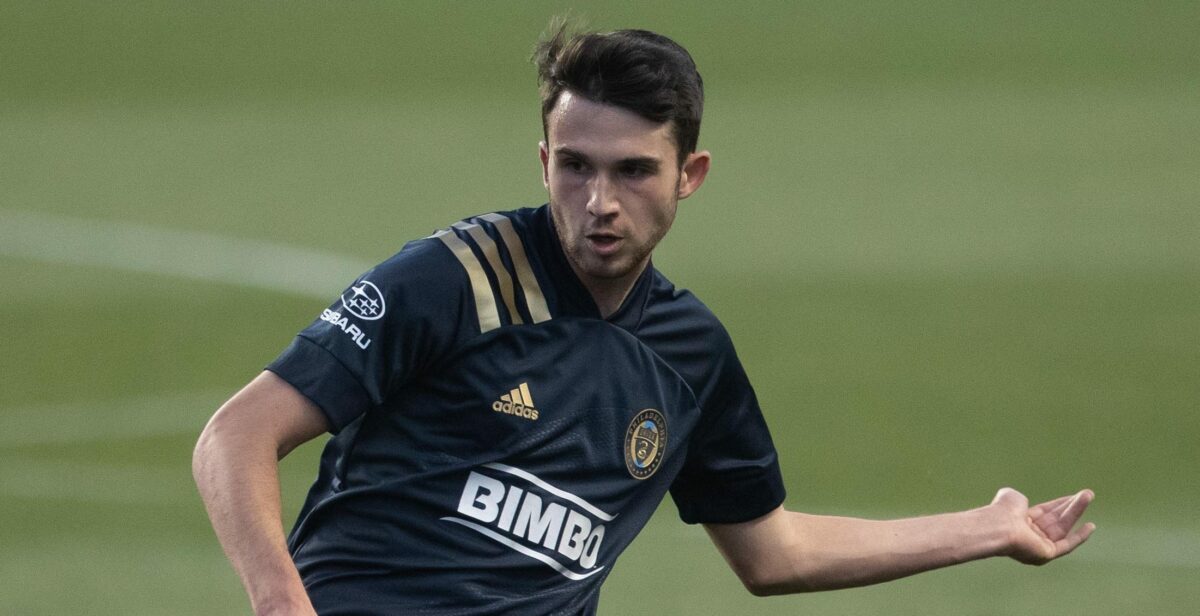 Leon Flach’s move from Germany to the United States earlier this year was a surprising one for the young midfielder, but after getting an immediate shot with the Philadelphia Union, Flach has become one of their more impressive players this season.

Flach made the move to MLS from German 2. Bundesliga side St. Pauli in March and has quickly jumped into Jim Curtin’s squad this season. The 20-year-old midfielder has slotted in nicely to the Union’s 4-4-2 diamond formation, normally partnering with Jamiro Monteiro, Alejandro Bedoya, and Jose Martinez in the early stages of the league season.

While many new players have struggled to adapt to the physical play of the league, Flach’s time in Germany has groomed him to be prepared for anything.

“I would say that I’ve had a great start here,” Flach told SBI. “Everybody from the players to the coaches has helped make this an easy transition and I am glad we are doing well with how we are playing. It’s also been fun to play against new competition and get the chance to play for one of the best teams in MLS. I’ve enjoyed my early time so far with the Union and the goals remain high for us.

“I think playing in Germany has helped because it gets you ready for any opportunity in the game,” Flach said. “MLS is different because its back and forth and there’s no real rest in the game, but overall it’s been a good challenge. The players are technically very good and we’ve already played some of them this season. [Carles] Gil and [Lucas] Zelarayan have been two of the top players I’ve played against and its definitely a challenge. I’m very excited to see more of what the league has to offer.”

Flach’s move to MLS was an unexpected one, especially after he started in six straight matches for St. Pauli throughout the month of January. The midfielder’s final match of that streak would be the last of his season in Germany before being scouted and signed by the Union ahead of the MLS season opener.

Since then, Flach has earned a spot in the Union’s squad and hasn’t looked back. He’s featured at both the No. 6 and No. 8 midfield positions, playing in both MLS and Concacaf Champions League play. Flach has helped the Union reach their first CCL semifinal, which will take place against Liga MX giants Club America over two legs in August and September.

Flach’s versatility and work rate has made him a consistent player for the defending Supporters’ Shield winners, and has also impressed Curtin in the first two months of the MLS season.

“He’s a coach’s dream,” Curtin told SBI about Flach. “He has a very high soccer IQ for a player his age. He does a lot of good things on the field and knows when to attack, but also when to defend and stay back. Leon is versatile and I think that will only help him have a great career as a player, whether that is in MLS of back in Europe.

“Credit goes to Ernst Tanner for helping find him because he has been a great addition to this club and I think the performances speak for themselves. Some matches we’ve asked new things from him, whether that is filling in for Jose [Martinez], and he has delivered. He’s done everything we’ve asked of him and I think you will continue to see more from him going forward.”

A former U.S. Under-20 Men’s National Team player, Flach is a dual-national who also can represent Germany on the international stage. He made two appearances for the USMNT U-20’s under Anthony Hudson, but since has yet to receive a call to the Under-23’s or even the senior team.

Flach’s versatility and good form for the Union could see him force his way into Gregg Berhalter’s plans this summer, a possibility that Curtin hinted at for the upcoming Concacaf Gold Cup.

“He has been in talks with Gregg [Berhalter] and his staff about possibly playing for the USMNT this summer,” Curtin said. “He’s definitely caught attention with his early play for us and I think the better he plays, the more opportunities he can get.”

“The USMNT is thin at the No. 6 position and Tyler Adams is dealing with an injury right now so who knows what could happen. Weston [McKennie] likes to play higher upfield now and Yunus [Musah] I could see as more of a No. 8. I think Leon’s name should definitely be mentioned with some of those guys because he does a lot of good things, with and without the ball.”

Despite being only one season in with St. Pauli’s first team, Flach trusted himself by choosing the Union once they came calling. The club has seen past lower league signings like Jamiro Monteiro, Kacper Przybylko, and Kai Wagner become current key players for the squad.

Flach is still fairly new to MLS and Philadelphia after spending most of his life in Germany, but has grown accustomed quickly to what is expected of him on the field.

“I know I can play a bunch of different positions, but just want to be out there helping the team,” Flach said. “The Union had a great season in 2020 and I think we have one of the best squads in the league when it comes to competitiveness and ability. We have a lot of guys here who I can think can play in Europe someday and that is something that will only give us more confidence going forward.

“We have seen what Brenden [Aaronson] and Mark [McKenzie] did here and now see they are doing well in Europe,” Flach said. “If you put a lot into this league and your chances then it will only help your career and I want that to happen with me too. St. Pauli was a great situation for me and provided me with good opportunities, but I was excited when I heard Philadelphia wanted me. I was considering a move to other German clubs in the second and third tiers, but this seemed to be the best move for me.”

Flach’s strong impressions with the Union has not only excited his teammates and coaches, but its helped the team remain consistent in its hope for a first-ever MLS title. The Union’s dream of completing a domestic double came to a screeching halt in the first round of the MLS Cup Playoffs, losing to eventual Eastern Conference finalists, New England Revolution.

Now with an impressive start to their debut CCL campaign and a positive run of form in league play, the Union will hope that Flach can continue to spark the midfield heading into a busy summer schedule. The Union will have two weeks off in June before resuming play on the 20th and accumulating four matches in a two-week span.

Flach knows there are plenty of matches left to play this season and is hoping to play a positive role in all of them.

“My goal is to stay consistent and stay focused and help the club win games,” Flach said. “I think that’s key if you’re a young player to be consistent, and I want to improve myself as well. I think for us as a club, it’s also important that we look from game to game to win.. not look too far down the road.

“I think we can do a really good job together and I think you can see that now,” Flach said. “We are on a really good run of form of late and advancing in the Champions League was also a big moment for the club. I think if we continue like that, the rest will come and we will have a really successful season.”