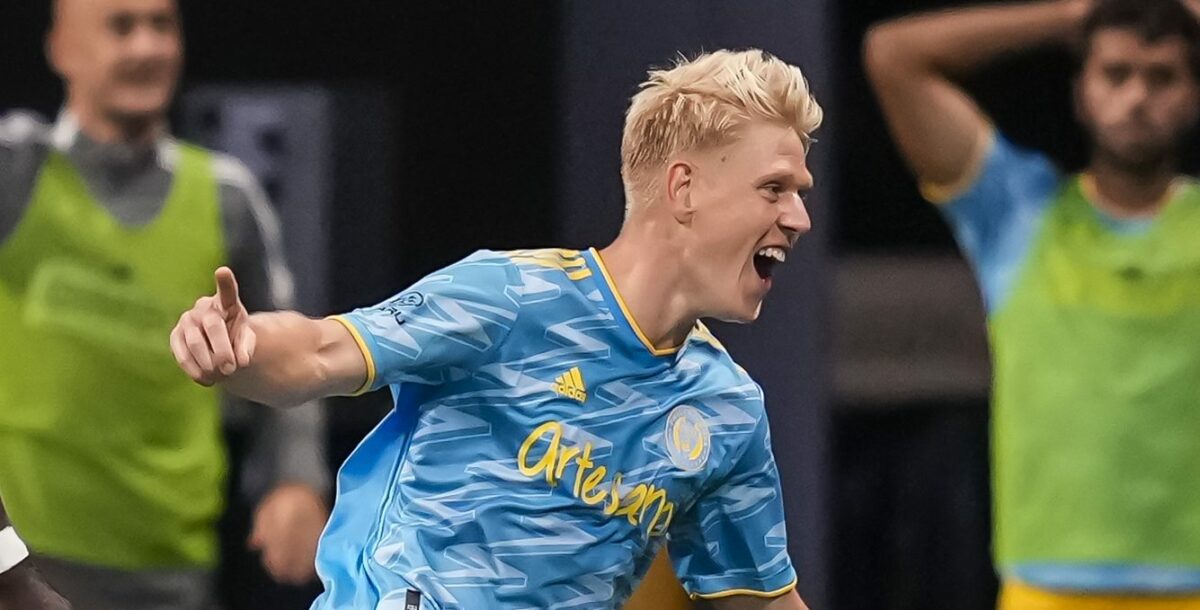 Jakob Glesnes is more known for his physical defending and passing ability, but has now added long-range shooting into his repertoire after delivering a stellar equalizing goal on Sunday afternoon.

Glesnes’ delivered his third-career MLS goal at Mercedes-Benz Stadium, helping the Union earn a 2-2 draw with Atlanta United. The Norwegian’s 35-yard missile helped Jim Curtin’s side complete the comeback in Atlanta, fighting back from a two-goal deficit to extend their unbeaten run to seven matches in all competitions.

While attacking players Jamiro Monteiro, Alejandro Bedoya, and Kacper Przybylko were still on the pitch in stoppage time, it was Glesnes who played the hero and scored the goal of the weekend.

“To pull up from where he did was pretty audacious,” Curtin said after Sunday’s match. “But he shut me up real quick and I’ve seen his shooting ability in training every week. It hit the crossbar three times in one play, so it shows how much power was on the shot. It was a memorable goal, anytime you can silence a crowd it’s the best feeling in the world.

“I don’t have many comparisons when you talk about a goal like that,” Curtin said. “He had a charge to him on that play and wasn’t going to give up. He had enough left into him to drive up one last time and shoot from 35 yards out. A big point out of the long break against a good Atlanta team.”

Glesnes was lively against the Five Stripes as the Union tried to get back into the match after falling down 2-0. The centerback raced upfield on several occasions trying to pull the Five Stripes out of their shape and set up his teammates for a shot on goal.

However, it was Glesnes who delivered the equalizer for the Union, beating Brad Guzan to the top-left corner, after his shot rattled in off the crossbar. Glesnes will not be expected to race upfield in every match going forward after his “Goal of the Season” nominee, but his long-range shooting ability will have other MLS clubs wary of what he brings to the table.

“They were really trying to man mark us near the end, so we just tried to take advantage of that,” Glesnes said. “I was really tired after making a lot of runs upfield, but I was happy to help the team and deliver when I could. To fight back from 2-0 to earn a 2-2 anywhere is a good result.”

Leon Flach’s stock with the Philadelphia Union has continued to rise and now he is garnering attention on the international level.

Flach was named to the U.S. Men’s National Team 60-player preliminary Gold Cup roster last week and remained in the starting lineup on Sunday. The 21-year-old featured at the No. 6 position, filling in for Jose Martinez who remains with the Venezuela National Team at the 2021 Copa America tournament.

The Texas native delivered a hardworking shift in the 2-2 draw, playing 89 minutes and covering a lot of ground in the Union midfield. Flach remains excited about the possibility of being with the USMNT later this summer, but is also focused on what’s ahead for the Union.

“It’s always nice to be mentioned, but it was also credit to the Union and how well we are doing which helped get me noticed,” Flach said. “If not for this opportunity, maybe I am still at St. Pauli and not playing as much. I am happy to be named to the preliminary roster, but it’s only the first step for me. I want to be playing at the highest level and maybe that will be coming down the road.”

Flach’s versatility has been a major boost to the Union this season, seeing time at both the No. 6 and No. 8 midfield positions. His never-say-die attitude and aggressiveness racing around the field has fit in nicely with how the Union want to play.

Up next for Flach is another opportunity to improve his stock on Wednesday against the Columbus Crew.

Sergio Santos earned the start next to Kacper Przybylko in the Union’s 4-4-2 formation, but left the match early due to an apparent head injury in the 2-2 draw.

Santos was replaced by Cory Burke at halftime, who went on to score the first goal for the Union in their comeback. Burke overcame a minor groin injury to play in Sunday’s affair, and might see more playing time pending whether or not Santos will need to miss time due to the league’s concussion protocol.

“Sergio dealt with a lot of things today and overall I thought did well for the time he played,” Curtin said. “He was dealing with an ankle problem then got hit in the head a few times and we wanted to make sure to get him looked at rather than risk anything.

“As for Cory, a lot of credit goes to our medical staff because he was dealing with a minor groin issue so we didn’t know if he was going to be available today,” Curtin said. “He was ready to go and was able to fight for his goal so credit goes to him for making himself ready and delivering. We’re going to need all three of our strikers this season and it’s good when we can rotate them and get them clicking together.”

Santos has only registered one goal and one assist across all competitions this season, a drop off after a stellar 11-goal haul in 2020. His physical play and hold-up ability is a key part of the Union’s offense, so a lengthy absence could be crucial for how Curtin sets up his team over the next few weeks.

His status for Wednesday’s home showdown against the Crew is undetermined yet, but Curtin is hoping to have him healthy for the long haul of the summer.

“We want to get him 90 minutes regularly,” Curtin said. “We’re going to get him evaluated, but we also don’t want him running himself into the ground this early in the season. Overall I am happy with where he is and where the guys are at. There’s days where he can run for 120 minutes and other days where he can only run half of that, so it’s good we have three strikers.”