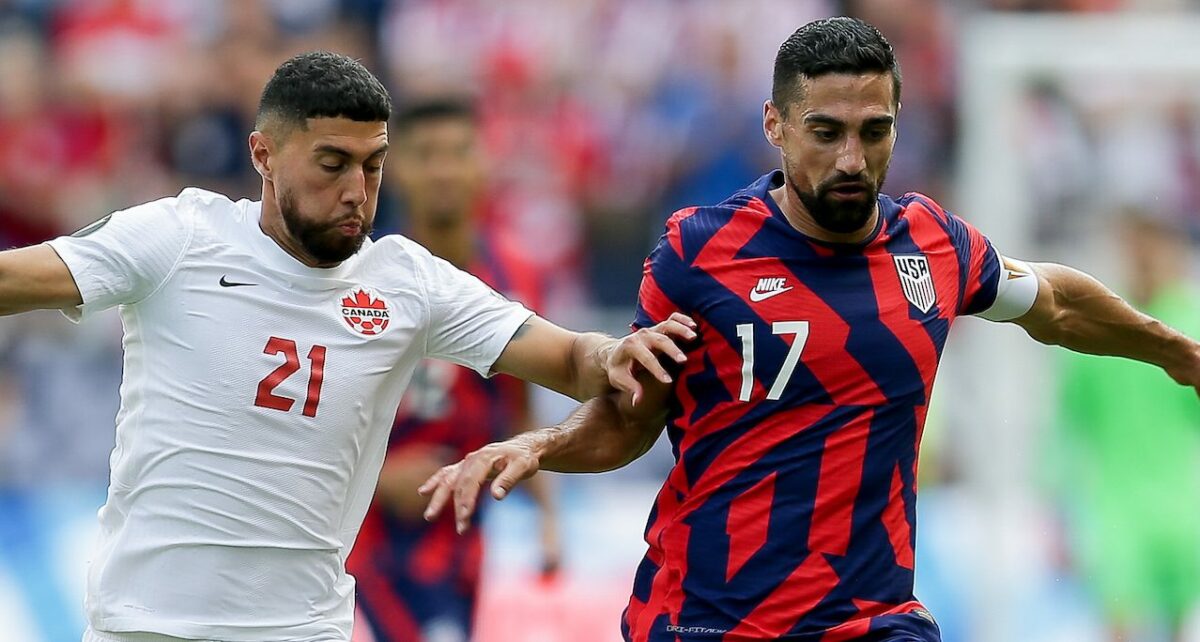 The Canadian men’s national team dominated for most of its Concacaf Gold Cup group stage finale against the U.S. men’s national team on Sunday afternoon, but ultimately could not finish the job as it slumped to second place in Group B. Despite having already clinched a spot into next weekend’s quarterfinal round, John Herdman and his squad felt majorly disappointed to not walk away with three points and the top spot in the group.

An early breakdown from Canada saw Shaq Moore score the eventual winning goal for the USMNT after only 20 seconds, helping Gregg Berhalter’s side claim a 1-0 victory. Canada did well to fight for the remaining 85 minutes of the match, having the better offensive chances and out-possessing the USMNT 55%-to-45%, but understands Sunday’s loss was a major opportunity missed.

"I think we deserved more from that game but I wish we could have been more ruthless in the box." #CANMNT #GoldCup2021 pic.twitter.com/wgisni4Bpe

“I think it’s a valiant effort today from the boys, but these are games that we need to win,” Herdman said post match. “It’s a good learning experience for us as we now head into the quarterfinals. I thought the USA did well in the opening 25 minutes, but after that we were able to come back and cause problems for them. I thought we showed some good adaptability, but overall we are disappointed because there was a good chance to beat them and finish top of the group.”

“I thought the first minute of the game we fell asleep and it’s something that we need to do a collective job of being better prepared for,” Canada midfielder Liam Fraser said. “For the remaining 75 minutes we had them on the ropes, we didn’t have some calls go our way. We have to be more clinical in the box since we had a lot of opportunities in the final third, but we didn’t take advantage of them. All in all, I fully believe we should’ve walked out of there with three points and the top spot in the group.”

Canada kept the USMNT on the back foot for most of the match, using the speed and creativity of Tajon Buchanan, Junior Hoilett, and Richie Laryea. A 24th minute injury to Ayo Akinola saw Cyle Larin play as the lead striker for the rest of the match, but the wing play of Canada continuously put the young USMNT center backs into dangerous situations.

Buchanan was denied by club teammate Matt Turner in the 48th minute from close range before the wing back also missed a golden opportunity later in the match to find the top-right corner. Lucas Cavallini’s long-range effort in stoppage time was the final chance for Canada to tie things up and finish as group winners, but Turner comfortably handled the striker’s effort.

Canada also had two penalty shouts waived off by the refereeing crew, with Walker Zimmerman and Donovan Pines both getting tangled up with Laryea on separate occasions. Luck was not on Canada’s side, but the performance showed how much better the program has gotten since Herdman’s hiring in 2018.

“The gap between the two [national teams] is no longer there, we’re a team that holds great players on both sides of the field and if that doesn’t show that we have developed into a good team then I don’t know what will,” Fraser said. “It’s a result that we have to start walking out with three points.”

“I don’t think the referee was good today to be honest,” Buchanan said. “Sometimes calls don’t go your way and you just have to keep working through it. Maybe someday we will get some calls that go our way, but for now we just have to focus on our performance as a team and can’t let the missed opportunity today stay in our minds.”

In addition to losing the match, Canada also saw two offensive players leave the match due to injuries and will await the news heading into training this week. Akinola was substituted off in the 24th minute with a knee injury while Larin was replaced by Cavallini in the 53rd minute due to a leg issue.

Both players have played different roles for Canada’s attack during the group stages and their absences for the quarterfinal round would surely force Herdman into some tough decisions with his formation and tactics.

“I think with Cyle [Larin] it was a dead leg, he took a knee to the leg,” Herdman said. “With Ayo [Akinola] it might be more problematic, he felt a twist in his knee. He had some mobility, but it was more precautionary from the medical staff. We hope these guys can come back quickly, but this short break in action for us is good to recover and focus on what’s next.”

Canada will next face either Costa Rica or Jamaica in the final eight on July 25, another major opportunity to go up against one of Concacaf’s elite sides.