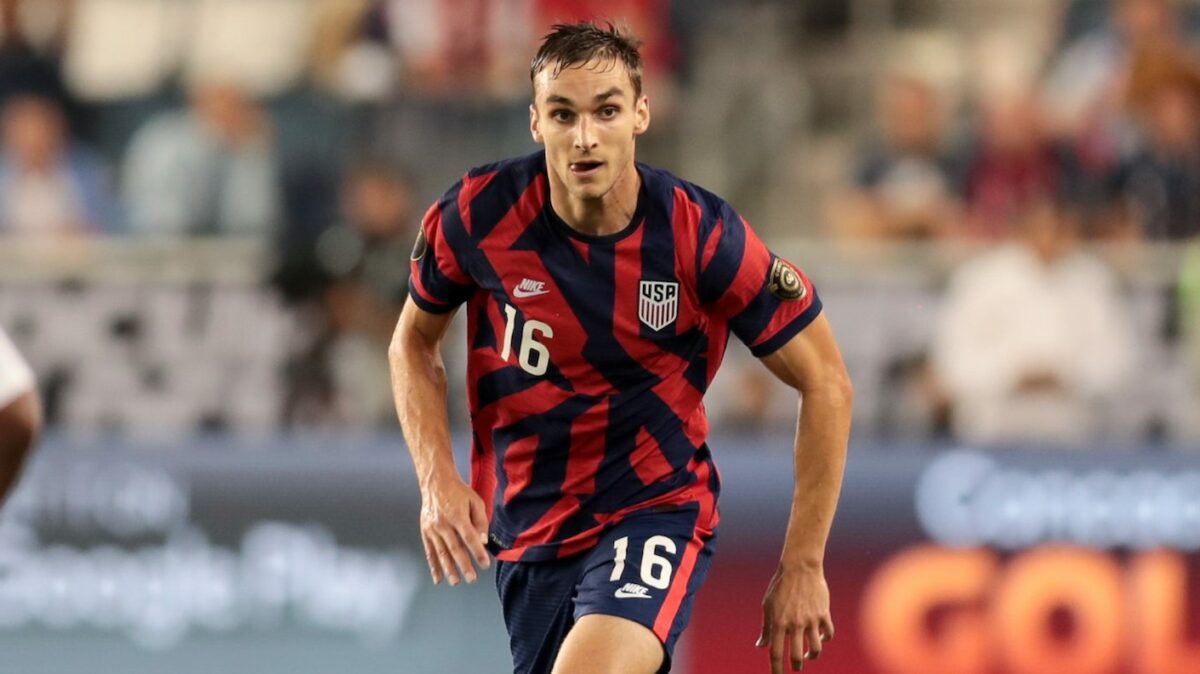 When the U.S. men’s national team roster for the Concacaf Gold Cup was unveiled, it became pretty clear that Gregg Berhalter was going on a hunt. World Cup qualifying is around the corner, and the USMNT coach was determined to shake the American soccer talent tree until some new options emerged to give him the depth he would need for a grueling qualifying schedule.

The Gold Cup has yielded some promising prospects, from Miles Robinson, to Matthew Hoppe, to Shaq Moore, but no USMNT player has boosted his stock more in July than James Sands.

The 21-year-old New York City FC defender has emerged as a revelation for Berhalter. Combining poise, solid defending, versatility and an uncanny combination of confidence and quality on the ball, Sands has gone from being an uncapped defender prospects to one of the USMNT’s most important players at the Gold Cup.

“I guess it’s been a surprise to a lot of people, but it’s not a surprise to me that I’m playing this way,” Sands said. “I’ve done it for a couple years with New York, and I’ve been pretty consistent at it.

“With the national team have had some unfortunate injuries, timing wasn’t always right, so I haven’t been able to showcase it,” Sands said. “But I think the things I’ve been doing in these past two games are things I’ve all done before. So I’m feeling pretty confident going forward.”

Equally adept at playing as a central defender and defensive midfielder after years spent logging minutes in both roles for NYCFC, Sands quickly established himself in USMNT camp as a player capable of handling the jump to international soccer. Berhalter inserted him into the starting lineup in group stage matches against Martinique and Canada and Sands handled himself like a veteran.

“You can tell that, at a young age, he has a lot of games under his belt,” Berhalter said of Sands. “He plays with experience, very intelligent player, gives the coaches a lot of confidence when he plays, and also confidence when you’re speaking to him and relaying game plans to him. You have a good understanding that he’s going to comprehend what you’re talking about.”

Aside from the poise, it was Sands’ versatility and passing ability that stood out the most, allowing him to function in a hybrid role against Canada that saw him shift from central defender to defensive midfield when the Americans were in possession. Sands flourished in the role in the first 30 minutes against Canada, dominating play with his positioning and passing, but his inexperience showed a bit as the match went on and he began to tire as the USMNT held on for the 1-0 win.

“I think one of the things I found challenging about the game was just trying to manage how much I’m running I’m doing getting between each position,” Sands said. “So I think you can see I started to get a little fatigued in the second half, and that’s something I’ll have to learn for the future and the games coming up.

“I had a lot of fun doing it,” Sands said of the hybrid centerback/defensive midfielder role. “And I think playing in both spots really showcases the best of my abilities. And I’m happy that Gregg and the coaches were able to trust me with that role, because it is a big roll. I’m happy it turned out well, and we were able to win.”

Sands’ emergence helped make the 5-3-2 formation Berhalter’s preferred setup against Canada, but Walker Zimmerman’s injury and subsequent departure from the Gold Cup will likely mean a shift back to a 4-3-3. Sands has experience playing in a two-centerback setup though, so that transition shouldn’t be a problem for a player who has impressed his USMNT teammates with his maturity.

“He’s a 21 year old playing like a 30 year old,” USMNT goalkeeper Matt Turner said. “I think that’s the biggest surprise for me was that he’s a very quiet kid. If you’re just riding on the bus or eating a meal, he’s not really saying much. But as soon as you step out on the field he takes a leadership role. He understands the game really well and I think one of his biggest assets is his passing ability and that’s something that’s really blown me away.”

The Americans will need Sands to continue playing at a high level as they face Jamaica on Sunday, and potentially facing high-scoring Qatar in the semifinals. If he continues to impress and perform well as the opponents get tougher, it will only serve to boost his standing even more in the crowded race for centerback spots on the World Cup qualifying roster in September.

Sands acknowledged that moving up the centerback depth chart to earn a place in qualifying was one of his goals for the Gold Cup, and he has done just that, especially among the centerback options in a potential 5-3-2 setup. Though he may be in a different system against Jamaica, Sands doesn’t see himself having trouble adapting. Versatility is one of his strong suits, along with the maturity to understand what he needs to focus on.

“There’s certain things that I’m good at, clean passes, clean touches, being defensively good,” Sands said. “And it’ll be important, especially in the knockout rounds, just to keep doing those things. Not trying to be anything that I’m not and I think good things will continue to happen.”

Berhalter will be banking on that, and with Zimmerman’s departure, Sands has become even more vital to the USMNT’s hopes of making a run to the Gold Cup final. That might seem like a lot to put on a 21-year-old taking part in his first USMNT camp, let alone his first national team tournament, but Sands has shown his coaches and teammates that he is ready for the challenge.

“I think James has done a great job,” Berhalter said. “Certainly, for us, for the coaching staff, one of the main surprises of the tournament so far, and we’re looking forward to him continuing his good form.”