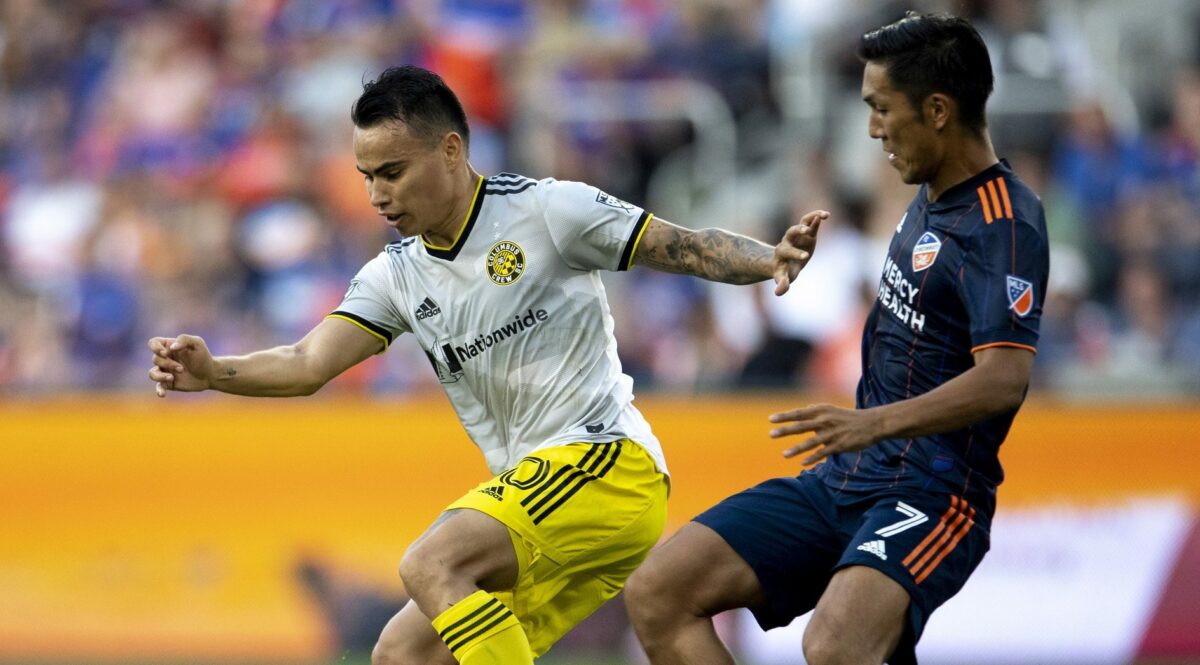 The $8 million signing of Lucas Zelarayán continues to be a gift that keeps on giving for the Columbus Crew.

His performance in Friday’s Hell is Real contest with in-state rival FC Cincinnati bailed his side out of some serious trouble and led it to one of the unlikeliest comebacks you’ll see all season.

“A lot of people won’t agree with me on this, but he is the best attacking player in the league. When he plays like he played today, I don’t see a guy in the league better than him,” coach Caleb Porter said. “We dropped into a 4-4-1-1 when we went down a man and basically left him up top and hoped that he would pull off a play or pull a rabbit out of the hat,”

The 29-year-old Argentine accomplished both with his goal and assist. What’s more is that he did it in an unnatural role as a false no. 9. More on that in a moment.

A hostile environment awaited the Crew in Cincinnati, where the first Hell is Real match of the modern era was hosted at TQL Stadium and in front of a crowd desperate to celebrate the first win in the building.

Within the first 37 minutes of the game, it looked like Columbus was pinned and the rival fans were in euphoria with a 2-0 lead and numbers advantage.

“I’ve never seen it. I’ve never been a part of a game, certainly, where a team has been down two goals and down a man, and then come back and claw out a result,” said Porter.

Zelarayán proved anything is possible when he’s on the field.

In first-half stoppage time, he hit a golazo to freshen the mood going into halftime.

“It was a play where Darlington (Nagbe) was [on] the ball and the defender stopped him. The ball kind of came towards me, so I tried to hit it on first incidence and tried to find the corner of the goal. Luckily was a good shot and I was able to score.” Zelarayán said through a translator after the game.

In similar fashion, he nearly found the equalizer himself in the second half with a shot that bruised the crossbar and caromed just outside of the goal line. Ultimately, he helped deliver a moral death blow to Cincinnati in the 77th minute by assisting Miguel Berry for the equalizer.

The Crew are currently missing 11 players due to injury and international call-ups. Included in that list of unavailable: both of their natural strikers Gyasi Zardes who is gone for the Gold Cup, and veteran Bradley Wright-Phillips who is sidelined with a thigh injury.

“Caleb asked me to play a little higher up, not stay still. He wanted me to still drop back and get the ball like I usually do,” Zelarayán said in Spanish. “I feel good and I think it was a good match and I was lucky to score. Overall, I’m just happy with the team’s work and with the result,”

Why couldn’t Cincinnati contain the most dangerous player on the field?

Because he can do it from anywhere, evidenced by his goal.

Zelarayán leads the league in goals outside of the 18-yard box with four. Only the New York Red Bulls and San Jose Earthquakes equal that statistic, but neither have a sole contributor responsible for it.

While the Crew remain short handed with Gold Cup action, they should be in good hands with Zelarayán taking over as the production leader. The defending MLS Cup champions have sputtered in recent weeks, and are now winless in the last four games.

The draw was a solid team effort for the Crew, but the times call for a cape-wearer. Zelarayán has proven to be that in the past, and the Crew are going to need him to weave together more big performances if they want to stay in the playoff race while missing several key contributors.

“Every bit is as good as we thought he’d be … anybody who watched that game, watched his performance watched how he drove a lot of things,” Porter said. “How he held the ball, how hard he worked, how much he cares. You know, for me, if you factor all those things in I don’t think there’s a better attacking designated player in the league.”