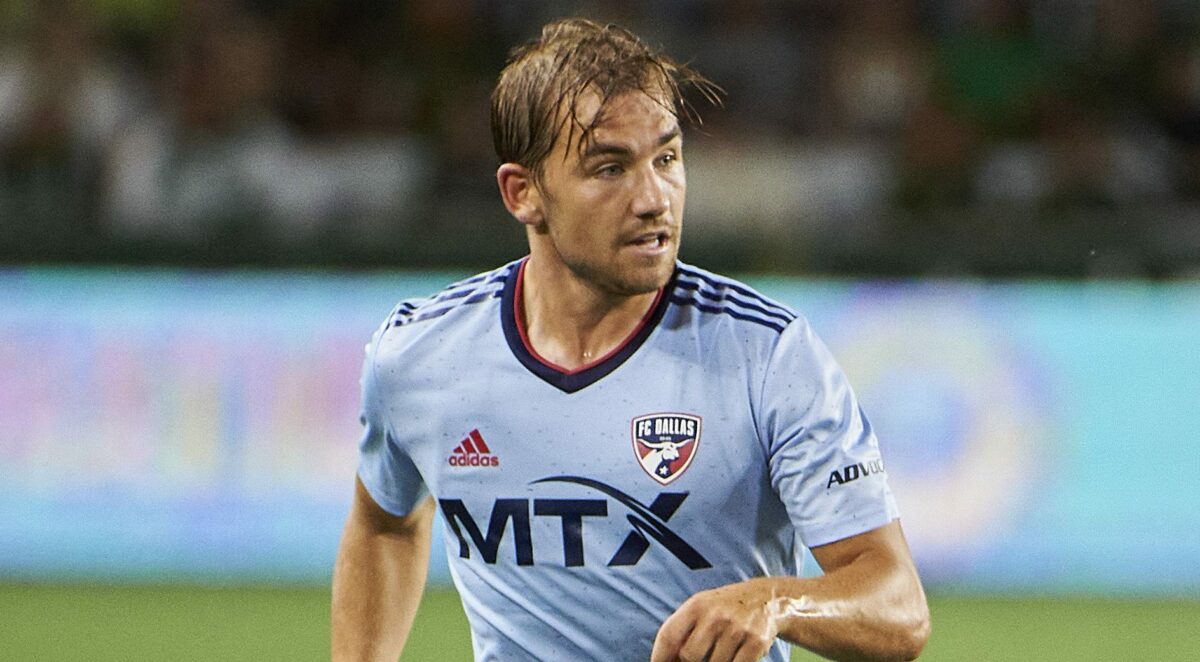 Paxton Pomykal is one of the young FC Dallas talents looking to help lead the club’s charge up the Western Conference table, and the central midfielder continued to do his part by delivering the first goal of his 2021 season on Saturday.

Pomykal made his fourth consecutive start and scored an early opener for Luchi Gonzalez’s side to help FC Dallas earn a 2-1 road win over Sporting Kansas City at Children’s Mercy Park. After making only one start in the opening three months of the 2021 season because of his health, the 21-year-old Pomykal is back to full fitness following offseason surgery and FC Dallas is currently reaping the rewards of the midfielder’s efforts.

“First off, I am feeling good,” said Pomykal. “That is four straight starts for me in two weeks so that is a testament to all the work I have put in to get back healthy and to the medical staff and doctors as well who helped me get back to where I was before.

“It has been a long road but I am finally feeling back to myself and making an impact in games, first and foremost,” Pomykal said. “Whether that is scoring goals and making assists or just doing my part for the team to help us win, I feel like in the past month or so we have played a lot better soccer than at the beginning of the season and the results are starting to come.”

Paxton, we've missed you so much. pic.twitter.com/MB43kDl88f

Poymkal has logged 300 minutes of action in FC Dallas’ last four games, and has most recently helped the club post back-to-back wins over the LA Galaxy and Sporting KC. His third-minute goal on Saturday once again showed his abilities in the final third, as he set himself up nicely before stroking a low drive into the bottom left corner of Tim Melia’s goal.

Pomykal also watched as Jesus Ferreira delivered a sensational winner in the second half, helping pad an FC Dallas lead that stood firm. The American midfielder delivered two key passes and took on SKC players in several 1-on-1 battles, too, coming out on top in seven of 13.

Still, Pomykal thinks there is room for improvement, especially in terms of playing within the collective.

“I had some combinations and passes that went astray and clipped defenders,” said Pomykal. “There is still definitely room for improvement game by game, that we are hitting more in sync and comfortable with each other in the final third.”

With back-to-back wins for the first time this season, FC Dallas will now shift focus towards its Aug. 4 meeting vs. a Seattle Sounders side that has lost two straight matches. That match will give Pomykal another opportunity to show he is working his way back to his best, and that bodes well for an FC Dallas side that appears to be finding its way a bit.

“Obviously it has been a rough start of the season,” Ferreira said. “We all know that, and we all know we need to do better. Last week was an amazing win, but it was going to count as nothing if we did not continue that (today). I think last week was a good step in the right direction of where we want to go and the type of game we want to play.

“Today we showed that we are keeping the momentum,” Ferreira said. “This is a good start of where we want to go, so it is three points at a time. We are kind of showing the game we want to play.”