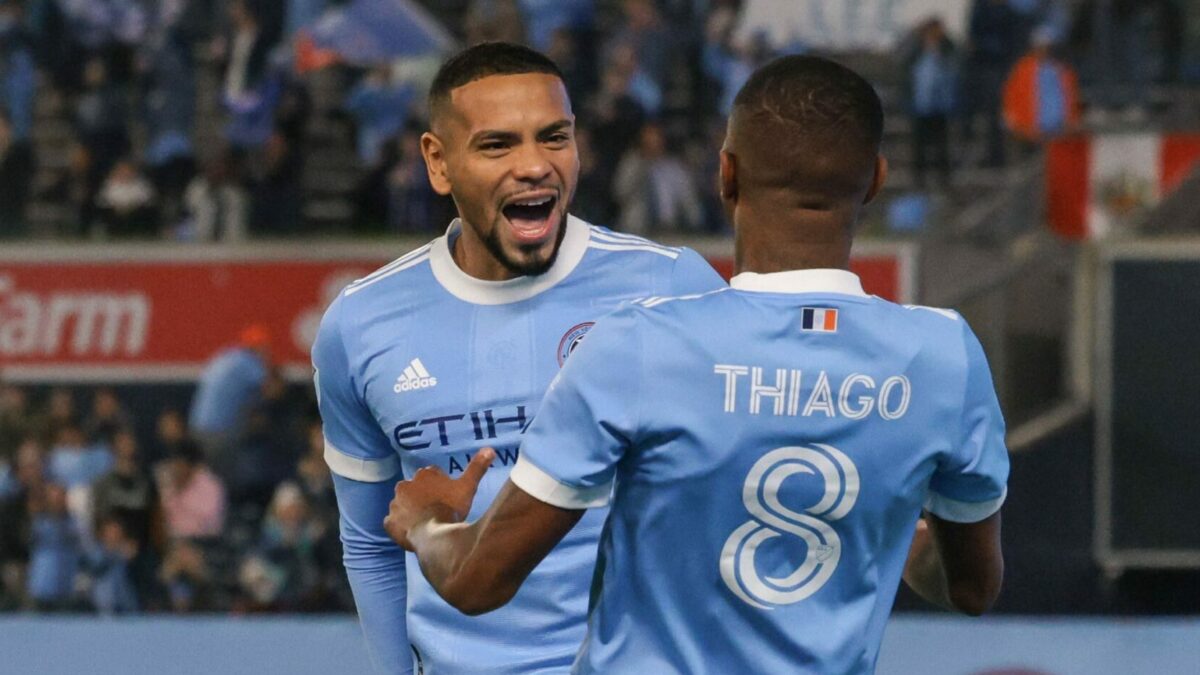 Goals had been hard to come by for New York City FC over recent weeks, but you wouldn’t have known it after Saturday’s historic win over D.C. United.

NYCFC scored four first-half tallies in a 6-0 triumph with striker Valentin Castellanos contributing two, snapping his four-match goal-less streak in the process. It was the first time in club history that NYCFC scored six goals in a league match, which helped the club snap a six-match winless run at an important time of the regular season.

“It’s in our DNA, we want to attack all the time and we want to give the fans entertainment and something to remember,” NYCFC head coach Ronny Deila said. “As we said before, this is the first time in club history we win by six goals so that’s something we have to take with us. At our best, we can do big things and at our lowest level it’s too low. Today we showed our best side.”

“It’s just how soccer is, it’s amazing of course,” said NYCFC left back Malte Amundsen, who registered three assists. “Scoring a goal that early in the game is something we’ve missed. So, playing here at Yankee Stadium in front of all the fans, I think you can see what that does to us. This is what we try to show always but it feels like we always have a special confidence here. We try to show that confidence always but sometimes you can’t see it but that’s what happened today, so you can see how we feel when we go out to play here at Yankee Stadium.”

NYCFC took control of the match just 36 seconds in as Thiago Andrade’s fourth goal of the season sparked the home team to three goals in the opening 11 minutes. Castellanos added two himself on a pair of right-footed finishes, extending his total to 15 this season and giving himself some form heading into the final three matches.

“I am very happy for the goals; the most important thing is the team,” Castellano said. “We are playing well and luckily, I am scoring and helping the team a lot. It’s very positive because it gives you a lot of confidence and on the personal level, I’m trying to get the most goals as possible to finish the season and then to focus on the playoffs.”

Even with a three-goal lead under their belt, NYCFC continued to keep its foot on gas. Maxi Moralez capped off a dominant first half with his first goal since September 14, truly ending the contest before the second half began. Alexander Callens and Jesus Medina chipped in goals after halftime, condemning D.C. United to its worst league loss in club history.

With the New York Red Bulls also winning on Saturday, NYCFC’s lopsided triumph propelled them into fifth place in the East, moving them one point clear of eighth-place CF Montreal with three matches to play.

It was a statement win for NYCFC, marking its first home win and first multi-goal win since a 2-0 triumph against New England on August 28.

“They are human beings, so they know exactly what kind of situation we are in,” Deila said. “We have to enjoy the moment now. It was a great match with good individual performances and as a team. We scored a lot of goals, and we have to take that confidence with us to the game in Chicago, but everybody knows that it’s all even now, so we have to just keep on performing, and if we do that we know what we are capable of doing as you can see today.”

It won’t be an easy task for NYCFC, who has already lost once to the Fire this season, but after running rampant against a close competitor in the playoff race, morale will be high.

“We have to focus on the next game which is Wednesday against Chicago, we know they are a tough rival that we haven’t been able to get a point from,” Castellanos said. “But right now, we have to enjoy tonight’s result and then from tomorrow start focusing on Chicago and hope it’s a great game for us.”