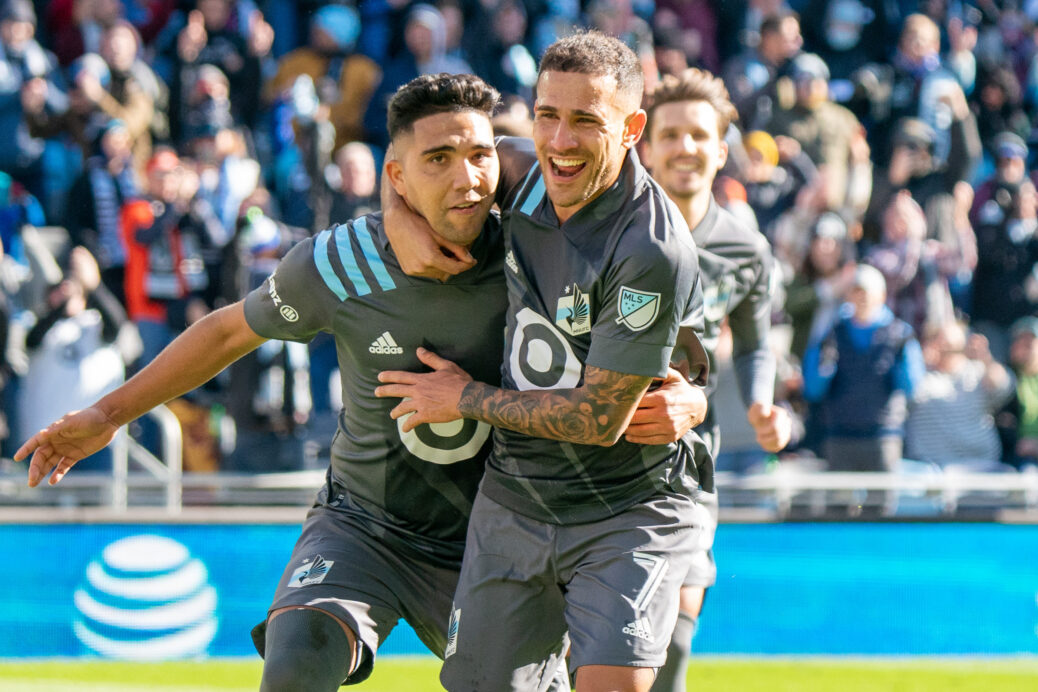 Minnesota United’s odds of making the 2021 MLS Cup Playoffs remain up in the air, but Sunday’s victory over first place Sporting Kansas City should have the Loons feeling good about their chances.

Adrian Heath’s side jumped into fifth place with one match to play after a 2-1 comeback win over SKC at Allianz Field on Sunday afternoon. The result moved the Loons back above the red line heading into the final week of the regular season and gave the team some extra confidence heading into a Decision Day clash with fellow playoff hopefuls, the L.A. Galaxy.

“[There was a] Lot of grit and determination, lot of belief, lot of courage,” Heath said postmatch. “As I said to you last week, the world wasn’t over when we lost to Colorado and it wasn’t when we lost to Vancouver. I don’t know what it is, everything is great when we win and everything is so much doom and gloom when we lose. And we are somewhere always in between because that’s the nature of the game. Maybe I had a bit more faith in the group of people that we had; the players, people who work here, than the people who watch us at times.”

The Loons fell down early thanks to Khiry Shelton’s eighth-minute opener for SKC, but the fight back from the club should do wonders heading into Decision Day. Franco Fragapane and Emanuel Reynoso each scored later in the first-half to swing momentum back into the Loons favor and give them a lead they wouldn’t relinquish at home.

Coming up against an in-form side like Sporting KC was a tough challenge for the Loons, but overall they did an excellent job of keeping the visitors out of dangerous positions. The Loons backline helped silence in-form winger Johnny Russell and hold SKC to only two shots on goal in the match.

Minnesota United took advantage of Real Salt Lake’s 4-3 loss on Saturday and kept their quest of a playoff spot alive for the time being.

“It means a lot,” Reynoso said. “We came off a loss against a big rival [Vancouver Whitecaps] where we weren’t able to implement our game on the field. So today we played against a big rival, with our people who always support. I think we covered a lot, we gave it our all and that’s why we deserved to win, because we played better and we gave our max in every divided ball.”

“It’s never easy when you go into a game, especially against a team that’s in the playoffs, comfortable where they are and playing with a lot of confidence and you know you have to win,” Heath said. “If we had got a point today, maybe we would have still been in it, but realistically I thought we had to win the game today. To go into the game with that mentality, that you have to win the game it speaks volumes for the players’ attitudes and determination. To come back from [going down] the goal like we did.”

The Loons will now have this week off before closing out their regular season schedule on November 7 in Carson, California. Heath and his players will be watching this week as Vancouver, the Galaxy, Real Salt Lake, and LAFC all are in action, which could shake up the table by the time the Loons kickoff at Dignity Health Sports Park next weekend.

Should results go in the Loons favor, they will still likely need to earn something against the Galaxy on Decision Day to clinch a playoff spot, knowing four teams under them in the table all have an extra match in hand. Sunday’s home victory might not clinch them a playoff berth in whole, but it could force extra pressure on the remaining teams who are fighting alongside the Loons.

“I think it was the best result, considering the pressure of play as well,” Heath said. “I actually think last week against LAFC is the best we’ve played this season, over the full 90 minutes. From the very first minute to the last minute, we were in control of the game. What did we have – 70 percent of possession. We used it really well, played in the final third, got shots in, got crosses in, That was the best performance. Today was a big-big game for the club, it was big for the players because as I just said, going into a game knowing you have to win a game, it’s a different mentality.”