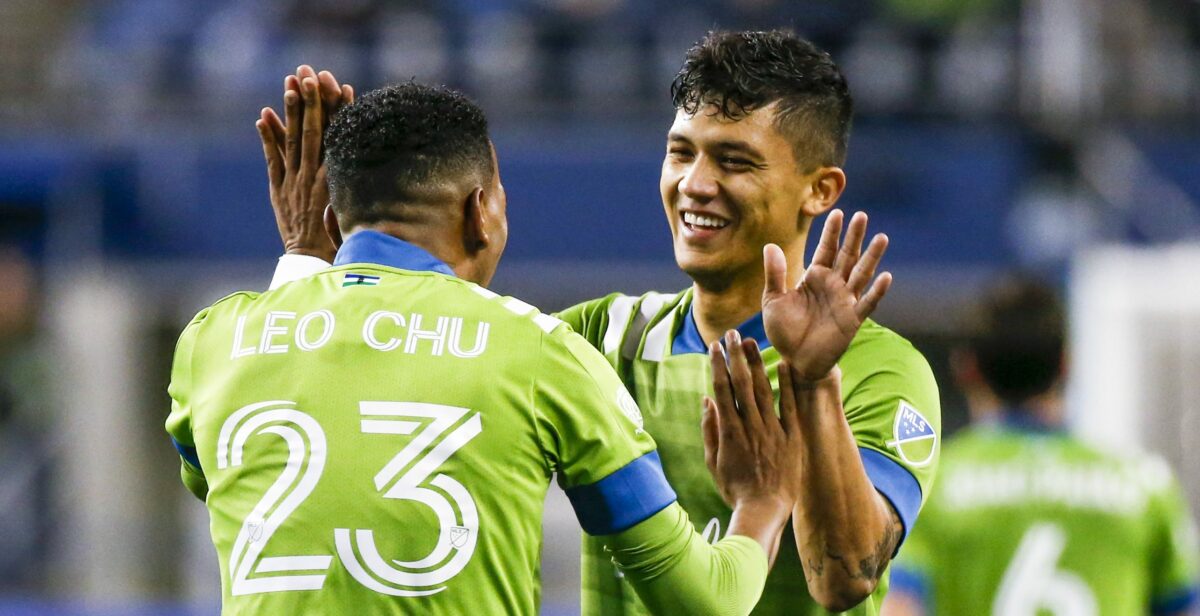 The Seattle Sounders were without several key players for Saturday’s Cascadia Cup clash against the Vancouver Whitecaps, but it didn’t stop them from clinching a playoff berth in a lopsided home victory.

Brian Schmetzer watched as four different players contributed goals in a 4-1 win over the Whitecaps at Lumen Field. Will Bruin led the way with one goal and one assist while Fredy Montero added two assists in the comfortable home triumph. Despite Brian White pulling back a goal before halftime, the Sounders re-extended its two-goal lead early in the second half before Leo Chu scored his MLS goal to cap the scoring in Washington.

Seattle’s win moved them five points clear of Sporting KC for first place in the Western Conference table and kept Vancouver sitting outside of the final playoff spot.

The Philadelphia Union saw Homegrown talents Paxten Aaronson and Nathan Harriel shine in a 2-1 road win over FC Cincinnati, giving Jim Curtin’s side a fourth win out of the past five matches. Curtin started four Homegrown players in the trip to TQL Stadium with seven players missing due to a combination of international duty and injuries.

Kacper Przybylko opened the scoring before halftime before Aaronson headed home Harriel’s second-half cross for his second MLS goal. Haris Medunjanin pulled a late goal back for Tyrone Marshall’s side, but the third-year eventually was eliminated from playoff contention with the defeat.

The New York Red Bulls claimed a fourth victory out of the past six matches by downing Inter Miami 1-0 at Red Bull Arena. Patryk Klimala’s first-half goal was all Gerhard Struber’s side needed to hand Inter Miami a fifth-consecutive defeat. Phil Neville’s side struggled in front of goal once again, registering only one shot on goal in the eventual loss.

In the lone match on Sunday, the Colorado Rapids fought back late to defeat Minnesota United 3-1 at Allianz Field. Cole Bassett’s 73rd minute penalty kick tied things up from St. Paul before Michael Barrios netted the winning goal in the 84th. Lucas Esteves added an insurance goal in stoppage time as Robin Fraser’s side stayed in touching distance of second place.

Here’s a closer look at this weekend’s MLS results: