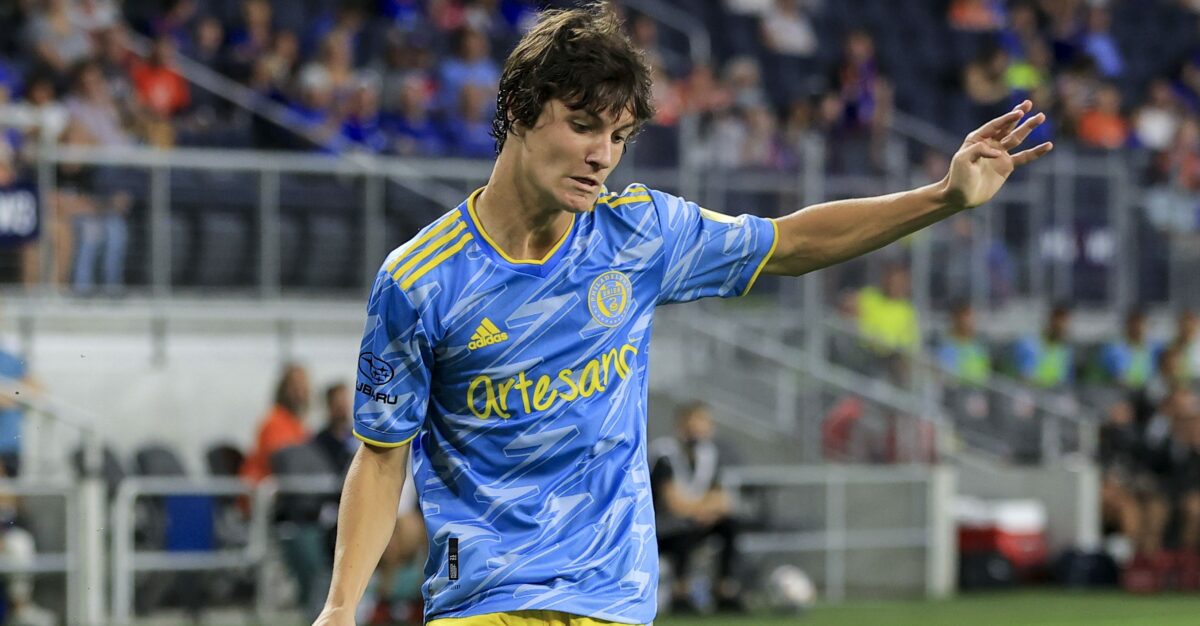 The Philadelphia Union took advantage of their match-in-hand on Saturday night in MLS play, even without seven players missing due to a combination of injury and international duty. Jim Curtin rewarded several Homegrown players with starts in a weekend trip to FC Cincinnati, and many shined as the club returned home with three points.

Paxten Aaronson scored the winning goal off a Nathan Harriel cross in the second half to help the Union defeat FC Cincy 2-1 at TQL Stadium. Five Homegrown players started and six finished with minutes under their belt in Ohio, showing the trust Curtin once again has in his young players in using them in important matches down the stretch.

“I don’t want to say they’ve been handed the minutes, because they’ve really earned them all,” Curtin said postmatch. “Missing seven guys is tough for any team, but credit to the veterans of my team for playing big minutes and for a lot of the young players to come in and deliver performances like they did tonight.”

“We were pushed by a good Cincinnati team,” Homegrown goalkeeper Matt Freese said. “They have some damn good players on that roster and they made it tough for us tonight, as you saw in the first half and the late push at the end. We had a lot of young guys play important minutes and that is huge at this point of the season to have that happen.”

Aaronson and Harriel were the standout stars for the Union, not only connecting on the eventual winning goal, but showing off their individual abilities at their respective positions. Aaronson, brother of U.S. men’s national team midfielder Brenden, excelled at the No. 10 position and made himself known on the goal by creating space for a headed finish.

He was confident on the ball and connected with his teammates on several occasions, showing again what he can provide with more minutes at the MLS level. Aaronson is still only 18-years-old, but already has two goals under his belt and is continuing to work with plenty of professionals on the Union roster. His short-term role could remain as a spark off the bench, but his long-term role is one that could replicate his brother’s.

“He’s a special talent, he is the real deal,” Curtin said about Aaronson. “The genetics with the family helps, but tonight was a big-time road match in a hostile atmosphere and he continued to want the ball to make a difference. He was running and pressing in the 90th minute to help close out the win, so you can see he is well beyond his years.

“I know a lot of people want more minutes for these young players, but there is a calculated plan we have for them,” Curtin said about Aaronson and the other young players. The training wheels are coming off at this time of the year and they are ready to ride the big-boy bus, especially for Paxten. He makes plays and that’s what we want out of him.”

Harriel, a 20-year-old right back, stepped in for Olivier Mbaizo and Alvas Powell who are both on international duty, and looked like a seasoned veteran. The Florida native helped limit FC Cincy’s creative leader Luciano Acosta and also delivered the game-winning assist off his cross from the right wing.

Unlike some of the other young players, Harriel only had one appearance for the Union prior to Saturday’s match. He spent ample time with Union II during 2020 and since has remained with the first team squad during its push through both the MLS and Concacaf Champions League schedule. Curtin compared Harriel to club legend Ray Gaddis back in April and the young fullback will continue to garner more praise with similar performances to Saturday’s.

“Every defender that isn’t getting minutes will likely say they can be the one that can help us, but then you get out there on an island of an outside back position and Luciano Acosta is running at you for 90 minutes which is a hard job to deal with,” Curtin said of Harriel’s role. “I thought he did excellent, he won a lot of his one-on-one duels, and he could’ve been cleaner in some aspects, but you saw him thrive in moments. We changed to a back-four at halftime so that helped, he embraces defending which is a dying breed a bit for young defenders in MLS.

“It felt good to get out there,” Harriel said. “Everyone in the team is always ready for when their name is called on so I was ready to go. It’s all about stepping out there and doing your job. Sure there was some different things to go through as the match went on with formation changes, but overall I felt good and wad glad to help the team get the win.”

Aaronson and Harriel were the headliners in Saturday’s victory, but many other young players stepped up. Freese made five saves to earn a win in his first appearance since mid-July while Jack McGlynn also got a start in the Union’s unique 3-4-1-2 set up.

Quinn Sullivan played 75 minutes off the bench following a first-half injury to Sergio Santos and Matt Real helped close out the victory by making his first appearance since late-June. It was an all-around team effort by the Homegrown players to give the Union a fourth win out of the past five matches and move them two points clear of second place Nashville SC.

Although the Union will see its international players return from World Cup Qualifying before an October 16th clash with CF Montreal, Saturday’s performance shows that the Homegrown talents within the squad can be relied on with six matches remaining.

“We know we are young players, but on the field it doesn’t feel that way to us,” Harriel said. “We want to perform for one another and I think you saw that tonight as we all worked our butts off. If Jim didn’t have faith in us, then we wouldn’t be on the field, but we are and it was a great win for us at this point of the season.”