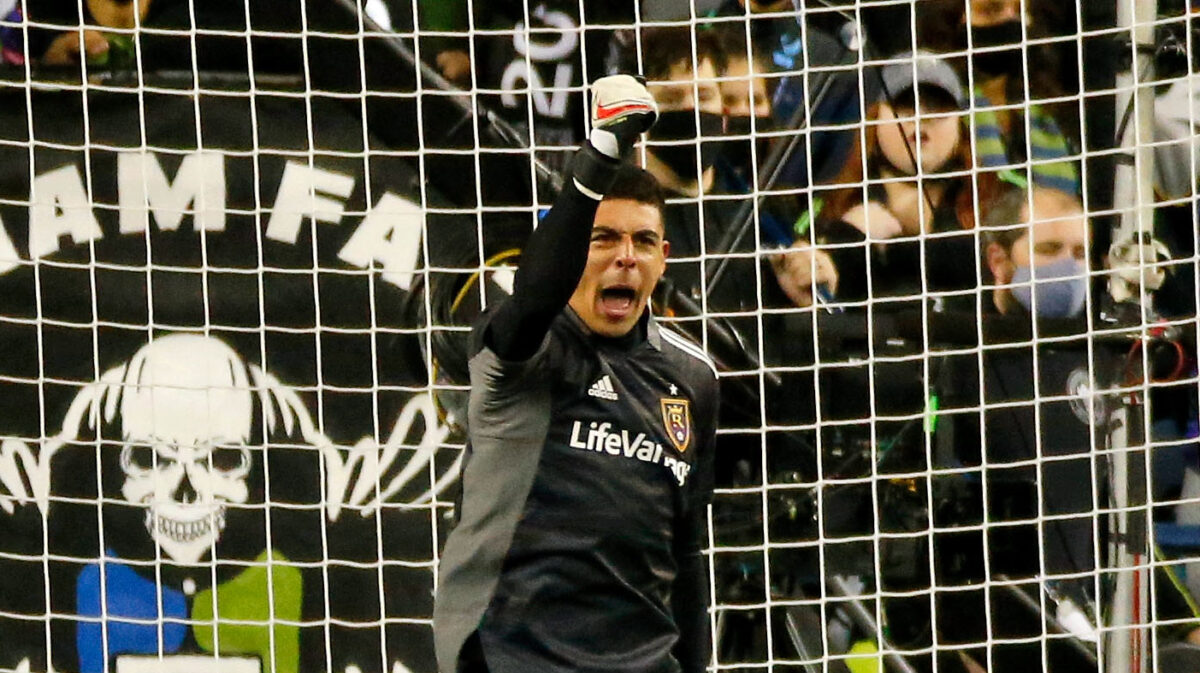 David Ochoa has gotten his share of support and criticism through the early stages of his MLS career, but Tuesday’s performance against the Seattle Sounders will have the young goalkeeeper feeling good moving into the semifinal round of the MLS Cup Playoffs.

Ochoa helped Real Salt Lake to a major upset on Tuesday at Lumen Field, making four saves, including a decisive penalty stop, in a 6-5 penalty shootout win over the defending Western Conference Champions. Ochoa was helped by some strong defending from his teammates, but also delivered when called upon as Pablo Mastroeni’s side booked a semifinal date with Sporting Kansas City on November 28.

“It’s definitely not easy, but I will tell you I’m a confident guy,” Ochoa said postmatch. “My mentality going in, even to training every day, is that I dreamt of this when I was a little kid and I am not going to let anyone get in my way and stop me from achieving my dreams. It’s not easy. I’m only 20 years old so I am just getting started. I’m not saying this is an easy career that I am pursuing, it’s definitely tough and I am learning every day. But that is definitely my mentality every day, I wanted to do this and I am going to give my all.”

“For me the most important thing is that the players are playing with a lot of confidence and everyone has a different way of showing that,” Mastroeni said about Ochoa. “With David, from the start of the game I knew he was going to be lights out because when he takes on that confident persona. He is dialed in. That’s his way of staying present, staying focused and coming up with big plays and tonight he did that. Obviously you want to be careful to not get thrown out of a game, but I think he was focused and dictating the pace of the game as he saw fit. He was a huge catalyst in the result tonight.”

Ochoa and the RSL backline were put under serious pressure throughout the 120 minutes, conceding 21 total shots in the match. The 20-year-old made three saves in regulation, but also made sure to play his part in terms of draining the clock in the final stages of extra time.

Nicolas Benezet, Yeimar Gomez Andrade, and Cristian Roldan all saw offensive chances denied by Ochoa in the match, while Raul Ruidiaz’s second-half strike had Ochoa beaten, but the crossbar came to the goalkeeper’s rescue. The Sounders beat Ochoa on their first five attempts in the penalty shootout, but Ochoa played the hero in round six, diving to his right to deny Kelyn Rowe’s attempt. That set up Justen Glad, who converted his attempt to secure the shootout victory..

“We have been studying them all week,” Ochoa said of his preparation for the shootout.
“With that we have to study their tendencies in penalties, so we definitely studied every single player and looked where they shot most often and then I had a paper right before the PKs. We definitely studied them, but at the end of the day I tried to go with instinct and not really listen to the paper because I also believe that I am a pretty good goalkeeper at penalties, even though today I wasn’t the best. We definitely studied them and after every training session this whole week we did PKs, so we were well prepared.

“All of the PKs, I tried to go with instinct and wait them out as long as I could,” Ochoa added.
“I noticed that on the first five PKs, they all shot to my right and I dove to my left, I was thinking that. But like I said, I like to go by instinct. I thought I waited him out pretty good and it was a great feeling.”

Ochoa has had a busy year with RSL, playing in 25 regular season matches, and continuing his overall development as a professional goalkeeper. He made headlines in the summer when he switched his national team allegiance to Mexico after having been part of the U.S. men’s national team’s Nations League squad.

Though Ochoa has yet to receive a call-up for Mexico, he has already taken part in youth national team action for El Tri, and his decision to leave behind the U.S. program he represented at the 2019 Under-20 World Cup only served to add to his status as a player opposing fans around the league love to hate.

One set of fans that loves Ochoa is the Real Salt Lake faithful, which can thank him for helping the underdogs pull off the first upset of the 2021 MLS playoffs, and one of the bigger upsets in MLS playoff history.