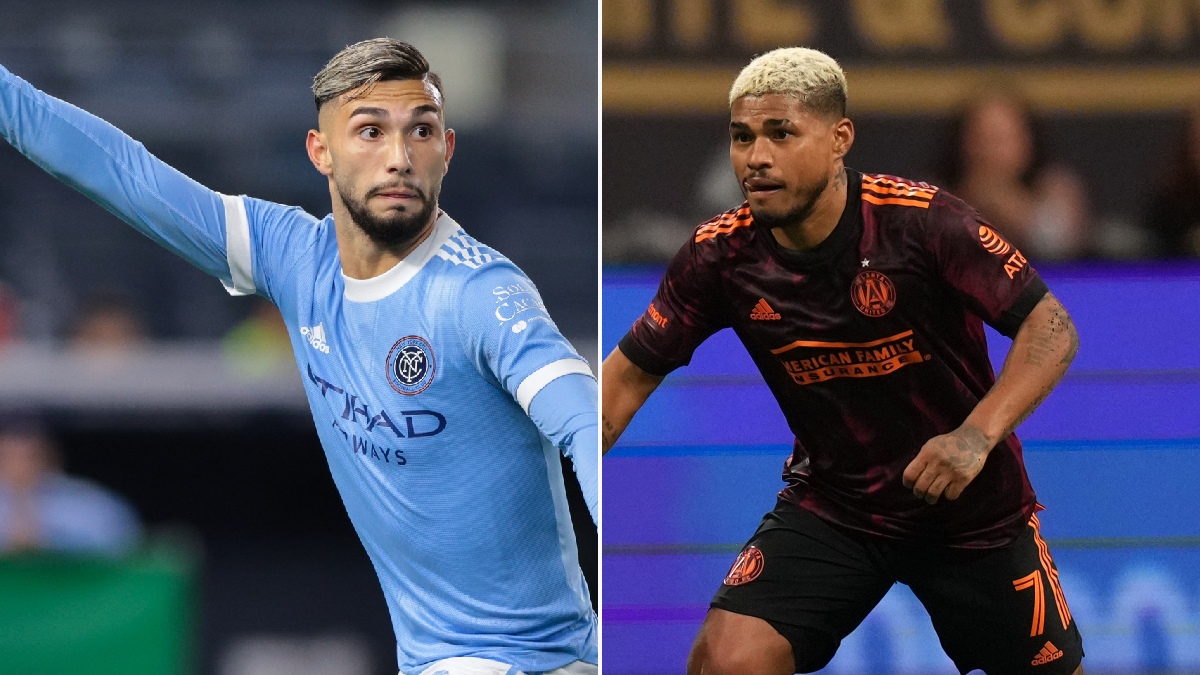 Though both sides likely anticipated themselves entering the 2021 MLS Cup Playoffs in better positions, New York City FC and Atlanta United each secured a berth and are set to clash for a spot in the Eastern Conference semifinals.

NYCFC recovered from a Fall slump that threatened its playoff hopes to finish the season fourth in the East, earning a home game for the Eastern Conference first round (Sunday 3 p.m., ABC). Playing at Yankee Stadium will be a significant advantage for Ronny Deila’s side, having lost just once in the Bronx this year.

Atlanta United turned around a season destined for doom after replacing Gabriel Heinze with Gonzalo Pineda in August while sitting in 10th in the conference. A quick turnaround, including a six-game unbeaten streak to end the season, helped earn the 2018 MLS Cup champions the fifth seed in the upcoming East playoffs.

Positive results on Decision Day should have both teams entering this game with a level of confidence. A 10-man New York City FC held onto the fourth spot in the East with a draw rescued by the head of Valentin Castellanos, while Atlanta United’s 2-1 win over FC Cincinnati was headlined by Josef Martinez’s spectacular strike.

Here is a closer look at Sunday’s Eastern Conference first round match:

Atlanta and New York City faced off twice during the MLS regular season to a pair of close results. NYCFC won the first meeting with a 1-0 result in June while the two sides settled for a point in 1-1 draw last month.

Valentín Castellanos not only stepped up to fulfill offensive responsibilities for New York City FC in 2021, but he proved to be one of the best forwards in MLS during his fourth year in the league. A career high 19 goals earned Castellanos the MLS golden boot and a nomination for Most Valuable Player this season. Having scored six times in his last four games, the 23 year-old is entering the playoffs during the best spell of his campaign.

Despite not being as lethal as years past, Josef Martinez finished the season with 12 goals in 24 games, all the while recovering from an ACL tear that kept him out for a majority of the 2020 season. The 28 year-old has scored five times against NYCFC in his career, including two in MLS Cup playoffs, a tally Martinez will be looking to add to on Sunday.

The tendenciy of Atlanta’s Marcelo Moreno’s to quickly push into the final third will give NYCFC’s Alfredo Morales plenty of work to do, especially if he’s the only defensive midfielder lined up for NYCFC. If Morales is successful in keeping the ball off Moreno’s feet, the 31 year-old could be the starting point in quick transitions. If not, don’t be suprised if Moreno’s name ends up on the scoresheet.

James Sands is one of the first names written down when constructing NYCFC’s lineup, but where he’ll be on the field is up in the air. Sands has spent the majority of the season in central defense or lying deep in New York City’s midfield but has recently moved out wide to replace Anton Tinnerholm, who suffered a season-ending Achilles injury in early October. Parks’ absence, alongside the uncertainty of Alexander Callens’ fitness, gives Ronny Deila a few problems to solve ahead of the first round matchup.

Atlanta’s main threat out wide comes from Luiz Araújo, a midseason addition that was crucial in the Five Stripes’ run into playoff contention. In his 15 games this season, the 25 year-old has proven to be quick, unafraid to take on multiple defenders and creative with his passing. Araújo scored four goals and registered four assists during the regular season, one coming against NYCFC in October.

The hosts may have some question marks in defense and midfield but where they’ll provide the biggest threat is along the wings. Santiago Rodriguez won the starting job on the left wing towards the end of the season and should get the nod opposite of Jesus Medina once again. This leaves Thiago Andrade and Talles Mango as dangerous options off the bench to break a potential deadlock into the second half.

Keeping NYCFC off the scoresheet at Yankee Stadium is a tough ask for any defender but Miles Robinson should be up for the task on Sunday. With both Atlanta and the U.S. Men’s National Team, Robinson has proven he can perform when the pressure is on, a quality needed for playoff action. An early return from international duty won’t hurt the 24 year-old either.

Gonzalo Pineda indicated midweek that Atlanta could return to playing in his preferred 4-2-3-1 formation, given Santiago Sosa’s return to fitness. Sosa, who begun training again Wednesday, suffered a lower-body injury in the team’s 1-1 draw with NYCFC in October and has missed the four games since. The 22 year-old midfielder is comfortable dropping into central defense when the occasion arises, giving Atlanta the flexibility to play with five defenders.

Sosa played nearly every minute of his 25 appearances before his month long absence, largely alongside Matheus Rossetto in the center of the park. Marcelo Moreno is also healthy after missing out on the season finale in Cincinatti with pain in his foot and should round out Atlanta’s midfield trio, if Pineda decides against starting the game with five defenders.

The history of these two teams may be short but how they’ve performed in the playoffs has differed quite a bit. New York City FC has won only one round of postseason soccer in its five attempts while Atlanta boasts an MLS Cup that included a successful two-leg win over NYCFC as well as a run to the Conference final in 2019.

Meetings between New York City FC and Atlanta United have typically been exciting, high-scoring games with the exception of this season. Atlanta controlled the game in the October draw by frustrating NYCFC with an organized and reserved defense and hitting on the counter, a strategy that earned the New York Red Bulls the only win at Yankee Stadium in 2021. Running that back might be the visitor’s best chance of moving on, that’s if they can keep New York City quiet out of the gate.