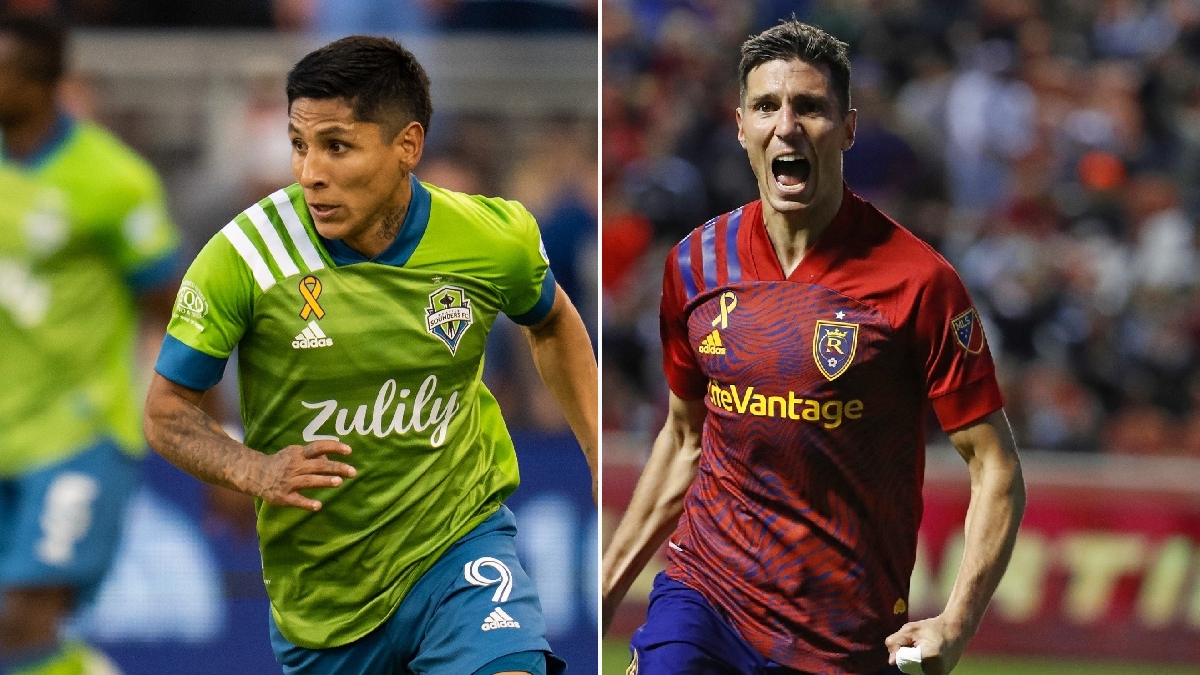 The Seattle Sounders endured a rough run of results to close out the regular season, but the return from injury of several of the team’s key stars has Brian Schmetzer’s squad looking very much like title contenders heading into their playoff opener against Real Salt Lake on Tuesday (10:30 p.m. ET, FS1).

Jordan Morris, Nicolas Lodeiro, and Raul Ruidiaz are back available for the Sounders, with all three expected to play key roles in the first round matchup. Ruidiaz has contributed 17 goals in 26 appearances this season, while Morris and Lodeiro are back to full fitness after lengthy injury spells this year.

Defender of the Year finalist Yeimar Gomez Andrade has been sensational in the Sounders backline this season, helping them finish with the stingiest defense in MLS, having conceded just 33 goals.

Real Salt Lake snuck its way into the playoffs after a dramatic 1-0 win over Sporting Kansas City on Decision Day, propelled Pablo Mastroeni’s side into the final playoff spot. The visitors have already defeated the Sounders once in 2021, albeit at Rio Tinto Stadium, but will be confident on the road at Lumen Field.

The attacking pair of Damir Kreilach and Albert Rusnak combined for 27 league goals and 15 assists this season, making them a deadly duo for the Sounders to deal with. Rubio Rubin and Anderson Julio are also options to feature in the attacking third, after combining for 16 goals between them.

Aaron Herrera and Justen Glad have been anchors of RSL’s backline this season and will need to be at their best to keep the Sounders’ veteran attack at bay. David Ochoa has continued to hold the No. 1 job in Utah this season and will go toe-to-toe with Stefan Frei in the goaltending battle.

Here is a closer look at this week’s Western Conference playoff showdown:

The teams have split the regular season series 1-1 with Seattle winning 2-1 at home on June 23. RSL defeated the Sounders 1-0 at Rio Tinto Stadium on September 18, but overall have not won in Seattle since June 2018.

Damir Kreilach finished as Real Salt Lake’s regular season MVP with his 16 goals and eight assists, continuing a strong career in MLS. The Croatian has come up big for RSL several times this season, including on Decision Day, when he scored in the 95th minute to clinch his side a playoff berth. His mixture of physicality and creativity should pose problems for the Sounders backline, who will look to stay close to him for all 90 minutes.

Raul Ruidiaz has missed time this season due to injury, but overall has delivered another strong MLS campaign for the Sounders. His 17 goals leads the team, which will have RSL’s defenders wary of his ability in and around the box. His ability to run behind the line could be crucial for the Sounders, who will look to keep RSL’s playmakers off the ball.

Damir Kreilach has had his way with a lot of MLS defenders this season, but the Croatian international will go up against one of the league’s top centerbacks on Tuesday night. Yeimar Gomez has been key for the Sounders continued defensive success this season and will be tasked with slowing down the in-form attacker. If Gomez can keep Kreilach quiet, the Sounders should have a much-easier time in their one-off match.

Rubio Rubin started his MLS career in style with eight goals this season and could be a threat in the starting lineup or off of the bench. Rubin’s pace and trickery in the final third could be key for RSL, who will look to score early and often against the Sounders. Even if he doesn’t start for RSL, he’s a good option to bring off of the bench late in the second-half.

The Seattle Sounders will rely heavily on Raul Ruidiaz for goals, but Cristian Roldan could also chip in if needed. Roldan chipped in five goals and six assists this season, continuing to blossom into an all-around midfielder. His ability to arrive in the box could prove crucial in the dying stages of the match.

The Seattle Sounders will be favored to advance with a win, but Real Salt Lake is playing with house money and will try to put the pressure on the home team.

Real Salt Lake will need to come out of its shell at Lumen Field and provide any type of attack in the final third to have a chance at a victory. Rusnak and Kreilach will be the go-to guys for Mastroeni to call on, while midfielders Everton Luiz and Pablo Ruiz do a lot of the dirty work in the middle of the park.

Justen Glad’s presence in the backline will be important for RSL as they try to keep Raul Ruidiaz off the scoresheet. Aaron Herrera has continued his developement as a consistent professional at right back, and could face the tough task of keeping Jordan Morris at bay.

Joao Paulo and Nicolas Lodeiro will see a lot of the ball for the Sounders, pinging passes around the turf and setting up the skill players in the final third. Cristian Roldan can also provide chances with his energy, covering a lot of ground and sneaking into the box on offensive situations.

Yeimar Gomez, Xavier Arreaga, and Nouhou Tolo will be tasked with keeping the in-form Kreilach outside of the box, while also repelling any chances from other attacking players. Stefan Frei remains one of the top goalkeepers in MLS and could be called on to save the Sounders if things go to a shootout.

RSL has the weapons to make things interesting, but if the Sounders stars can shake off the rest and find their rhythm, it could be a long night in Cascadia for the team from Utah.