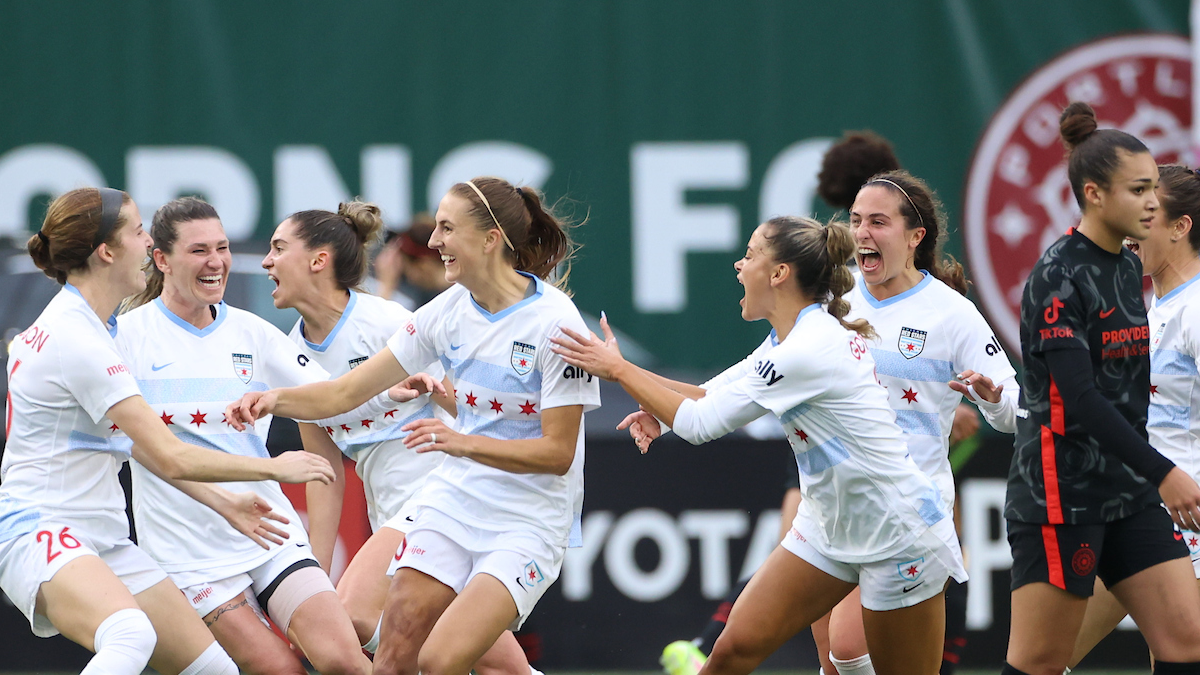 The stage is set for next weekend’s NWSL Championship final, and it’s not the matchup that many, if any, would have predicted.

The Washington Spirit and Chicago Red Stars will duke it out in Louisville on Saturday in a battle between teams that have never won an NWSL title.

Coming off of bye weeks, and with home-field advantage, OL Reign and the Portland Thorns had their campaigns ended in stunning fashion.

The Thorns ended the year with three of four trophies for the taking, but won’t be claiming the biggest one after failing to put up a goal on a heavily compromised Red Stars side, and shrouds outgoing head coach Mark Parson’s otherwise dominant campaign.

OL Reign and its star-studded roster was more competitive against Washington and worked hard to find a late equalizer. Spirit head coach Kris Ward’s late gamble to take golden boot winner Ashley Hatch off for defender Paige Nielsen paid off as his side stood tall and fought off a late flurry of threatening chances.

Here is a closer look at Sunday’s NWSL semifinal results:

It did not take long before things popped off a Cheney Stadium in Tacoma, with the teams swapping goals in the first 12 minutes in a nervy back and forth contest.

The Spirit’s ticket to Louisville was booked by Ashley Sanchez in the 68th minute when she put up a creative finish you don’t see every day, chipping the goalkeeper from close range for the winner.

The game winner came long after a thrilling start, and the hometown Reign walk away disappointed they didn’t keep their foot on the gas after a third-minute opening goal from Eugénie Le Sommer. The French newcomer buried a chance brought to her by Megan Rapinoe on the break. The goal goes down as the earliest score in NWSL playoff history.

A late surge from Reign kept things interesting, but the Washtingon women stood rigid and amassed a total of 12 blocked shots, nearly half of what the home team threw at them (23).

The Spirit have now rattled off two upsets in a row and figure to be the favorite against Chicago.

The Red Stars stunned Providence Park with two unanswered goals, and to make matters worse, one is going to be making the rounds on the internet for days to come.

Midfielder Sarah Woldmoe hit a golazo in the second half to bury the Thorns.

Both teams came in missing star players, but Chicago’s situation got worse in the 29th minute. Production leader Mallory Pugh was missing due to COVID-19 protocols, which put more pressure on striker Kelia Watt, who went down with what looked to be an upper-leg injury that took her out of the game.

But they found a hero in substitution 27-year-old Mexican international Katie Johnson, who made an impact in 10 minutes. She bested Thorns goalkeeper Bella Bixby at a razor-thin angle which opened the door for the shocking upset.

There was no answer for Portland’s absences. Crystal Dunn missed the game after announcing her pregnancy earlier in the week, and Lindsey Horan had an incident in training which temporarily compromised her vision and rendered the USWNT star unavailable.

The Red Stars didn’t figure to have goalkeeper Alyssa Naeher back, and are potientially heading to the final without the services of Casey Kreuger, Pugh, and now Watt, four key starters. Beating the Thorns in that condition should leave them with the impression that anything is possible.