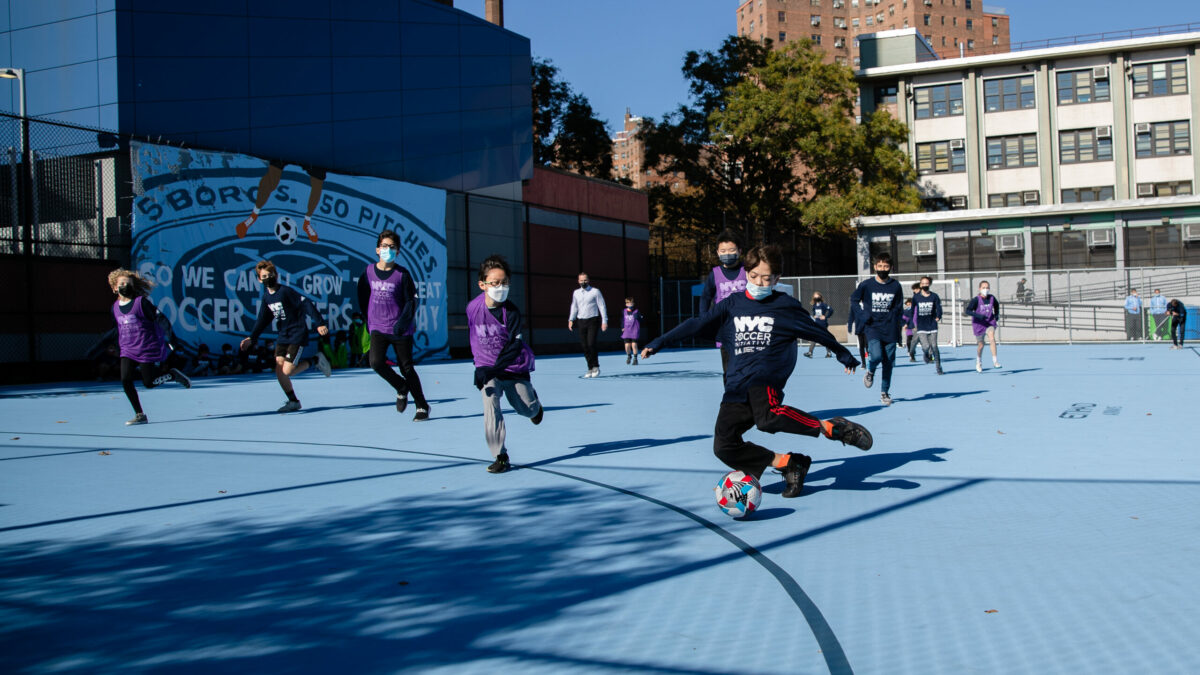 While one cycle concluded for the New York City Soccer Initiative Wednesday, another one will soon be underway.

Upon the completion of its five-year initiative to build 50 mini-pitches around New York City, the group — which includes New York City FC as a partner — announced a further commitment to build 26 more facilities before the 2026 World Cup, which will be hosted in the United States, Canada and Mexico.

The last of the 50 mini-pitches was unveiled on Wednesday at P.S. 184 Shuang Wen in Chinatown, where students participated in an inaugural scrimmage with NYCFC head coach Ronny Deila and players Maxi Moralez, Taty Castellanos, Tayvon Gray, James Sands and Malte Amundsen in attendance.

The initiative, founded to expand free soccer access to underserved communities, was also led in partnership with the Mayor’s Fund to Advance New York City, and First Lady of New York City Chirlane McCray was among those in attendance Wednesday.

“These soccer pitches are a tremendous contribution to the mental and physical fitness of our young people,” McCray said in a team press release. “The skills they learn and the games they play provide opportunities for them to learn teamwork and empathy.”

The initiative was launched in 2016, and a video message supplied to media members from former NYCFC winger Jack Harrison (who debuted for the team the same year, and now plays for Leeds) provided a reminder of the project’s scope and length.

“It’s something that I was a part of when I was there and I feel really proud to be a part of it,” he said.

The Chinatown pitch was one of 13 facilities installed by the initiative in 2021, and it arrives with a fresh sky blue paint job and NYCFC logo in the center. It also has a tifo — created by the team’s independent supporters’ group, The Third Rail — adorning the side of the pitch with an inspiring message (“SO WE CAN ALL GROW TO BE GREAT SOCCER PLAYERS ONE DAY”) for young participants.

But the initiative is not merely leaving soccer players to their own devices. As announced Wednesday, the NYCSI Community Cup will be launched next spring, giving players from all boroughs the chance to compete in a knockout-style 5-a-side tournament and receive free coaching.

For now, those tied to the project will bask in its completion.

“Seeing young people enjoying these pitches is what football is all about,” Deila said, while team CEO Brad Sims said he was “proud” to make good on the initiative’s 50-pitch goal.

There was even a message from Pep Guardiola, the manager of (NYCFC sister club) Manchester City, who famously took a year’s sabbatical in New York City after leaving Barcelona.

“Young people want to play and need a place to play,” he said. “The fact that there are now 50 new football pitches throughout New York City because of NYCFC and our Group is amazing and will make a big difference in the lives of young people. I have said it for many years, I believe there is an incredibly bright future for football in the U.S. and amazing projects like this one will play a part in helping to produce the next generation of young American talent.”

With even more pitches on the way, who knows — maybe NYCFC will find future first-team talent on the very surfaces it helped build.