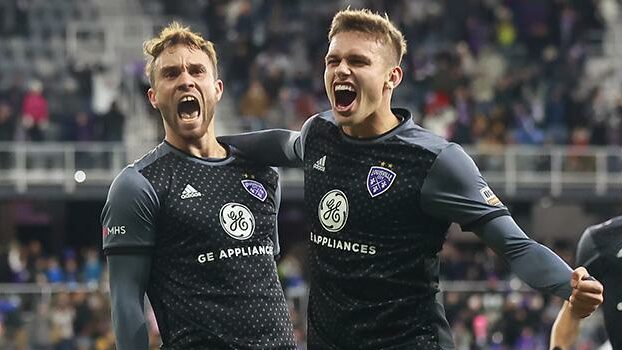 After conference semifinal action on Saturday night, the Conference Finals are set in the USL Championship playoffs. The Tampa Bay Rowdies, Louisville City FC, Orange County SC and FC San Antonio are the last four teams standing after advancing from their matches on Saturday , which brought a couple of late finishes and a penalty shootout.

Both Eastern Conference teams, Louisville City and the Tampa Bay Rowdies, progressed to the conference final with 1-0 wins in conference semifinal matches Saturday night. The Rowdies earned a 2-1 win in last season’s clash, but did not play in the 2020 USL Championship final due to COVID-19 issues.

The Rowdies secured a win over Birmingham Legion Saturday night, when Yann Ekra scored a second-half goal which proved to be the winner. Louisville City, led by first-year coach and former MLS player Danny Cruz, found a late answer with a converted penalty kick in a win over the Charlotte Independence.

Here’s a look back at the USL Championship Conference Semifinal matches from Saturday night:

Cameron Lancaster fired a penalty kick into the top of the net to send Louisville City FC into the conference final with a 1-0 win over Charlotte. Louisville commanded much of the match with 55% possession and five shots on target.

The penalty kick came about after a foul on the left side of the box in which Charlotte’s Joel Johnson appeared to handle the ball as he went down for a tackle against Jonathan Gomez. The referee signaled a penalty to intense protests from Johnson and the rest of Charlotte’s team.

Lancaster made no mistake by scoring to propel his team into the conference final.

Yann Ekra rose to the occasion to send the Rowdies on course to vie for their second USL Championship final berth in a row. Ekra scored the decisive goal in the 57th minute after an assist from Conner Antley.

Ekra powered the Rowdies attack, with three shots, one key pass and 21 passes completed out of 24 attempts.

The Rowdies will face Louisville City in a battle of the top two Eastern Conference teams from the regular season.

Orange County’s Ronaldo Damus at first had his game-deciding penalty kick saved, but the referee ruled Oakland Roots goalkeeper Paul Blanchette jumped off his line early. Given a second chance to win the shootout, Damus scored to send Orange County into the semifinal.

Rio Grande Valley shocked the Western Conference in the previous round by defeating top-seeded Phoenix Rising, but saw their luck run out on Saturday.

Santiago Patino and FC San Antonio brought plenty of offensive firepower to this quarterfinal, with the former Orlando City draftee leading the way.

Patino scored in each half, then Nathan Fogaca added another goal to complete FC San Antonio’s rout.