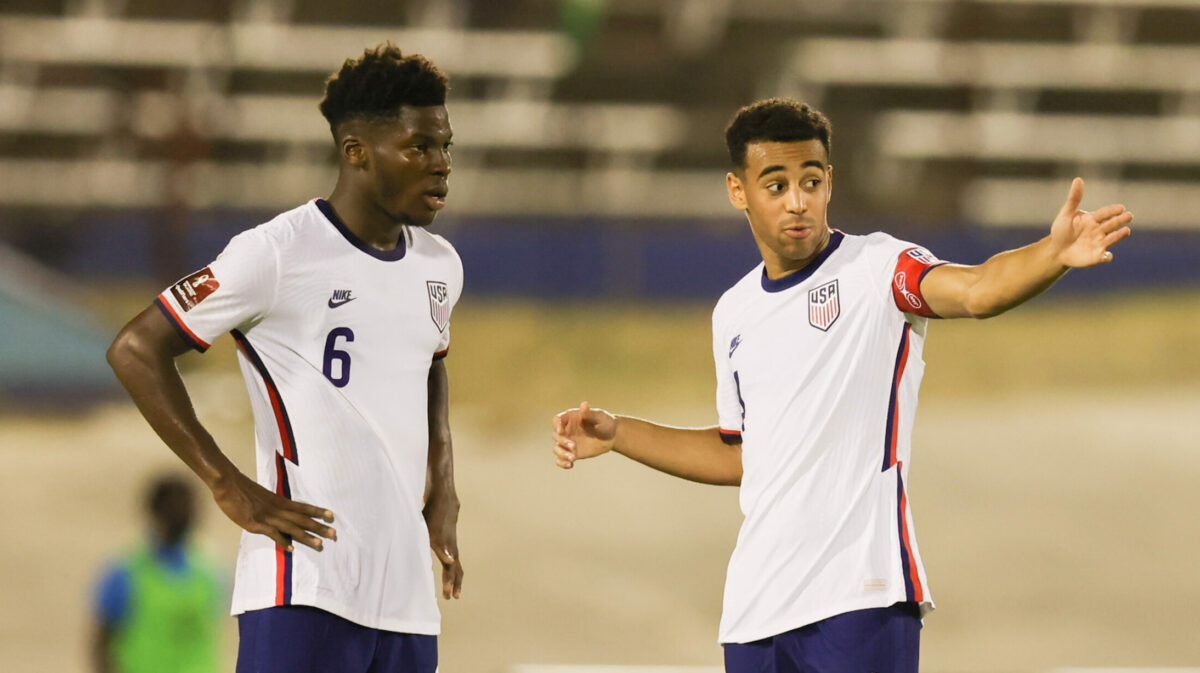 The U.S. men’s national team concluded its 2021 competitive schedule on Tuesday night with a road draw against Jamaica, and although the result won’t feel like a positive to many, the Americans continued on the right track heading into its final six World Cup Qualifying matches.

Gregg Berhalter’s side saw an early advantage slip away in a 1-1 draw with the Reggae Boyz in Kingston, hanging on for the USMNT’s third draw through eight qualifiers overall. While the USMNT did drop two points on the road, hanging on against a Jamaican side desperate for points was key to ending November’s window without a defeat.

“We’re not looking at tonight as a disappointing result, we’re looking at it as a good result,” Berhalter said postmatch. “Any time you can get a point on the road is a good thing. I think for the guys to have their heads down because we wanted more from tonight is completely natural, but this is a point we’ll absolutely take from the road.

“What we will do now is evaluate, we’re going to be back in camp in about two weeks for the friendly against Bosnia and then we have another break before the January camp begins,” Berhalter said. “There’s not a lot of rest for us. The message to the guys was to come into this camp and end in one of the top two spots and we’re in position to do that. Now we have six qualifiers left and hopefully we can see the qualification.”

Outside of Michail Antonio’s thunderous blast in the 22nd minute, the Americans held the Jamaicans to only one shot on goal. Walker Zimmerman and Chris Richards did well to keep the West Ham forward in check for most of the match, while DeAndre Yedlin did the same with Aston Villa winger Leon Bailey.

Timothy Weah continued his good run of form with his second international goal, showing off his determination in the box and clinical ability from a tight angle. Ricardo Pepi and Brenden Aaronson both logged a lot of running in the match, pressuring Andre Blake and the Jamaican backline for their 77-minute outings.

It wasn’t a glamourous performance by the Americans at all, but it’s another positive step for this youthful squad of players.

“I think we’re on the right track, having the guys get experience on the fly,” Berhalter said. “We’re playing an Olympic-eligible team in regards to age, roughly 22.3 years old average age. The guys have done a great job adapting to that and we’ve had some very strong performances at home and the road performances we’ve earned five points from four matches.”

“In 2021 we’ve lifted two trophies, we’ve won 16 games, and we’re where we want to be in qualifying,” Berhalter said. “The guys have done a great job and it’s all down to them and their commitment to the program.”

The USMNT will take plenty of positives from its four-point window, especially after handing rivals Mexico its first loss of qualifying on Friday. Several young players are racking up consistent minutes in the squad, providing an early glimpse of what the long-term roster could be for 2022 and beyond.

Veteran players like Christian Pulisic, Zack Steffen, and Zimmerman have contributed big moments this month and will now aim to continue playing leading roles heading into the new year. Other players like Gio Reyna, Sergino Dest, and John Brooks could be back into the squad by January and February’s qualifiers, giving Berhalter even more options to call upon for matches against El Salvador, Canada, and Honduras.

“The first window was a major learning experience for us in terms of how to mentally prepare for these three games and get through the travel and we got five points from those matches,” Berhalter said about the September window. “Then the next two window we still averaged four points in each of those, so that’s pretty good when you think about the inexperience and youth of this group.

“We’re learning on the fly,” Berhalter said. “One game is in a cold environment, the next is in a tropical place, so it’s all different challenges we have to face. I think the guys have done a good job of learning as we go, and now it’s about making sure we’re ready for 2022. We will take our position for right now.”