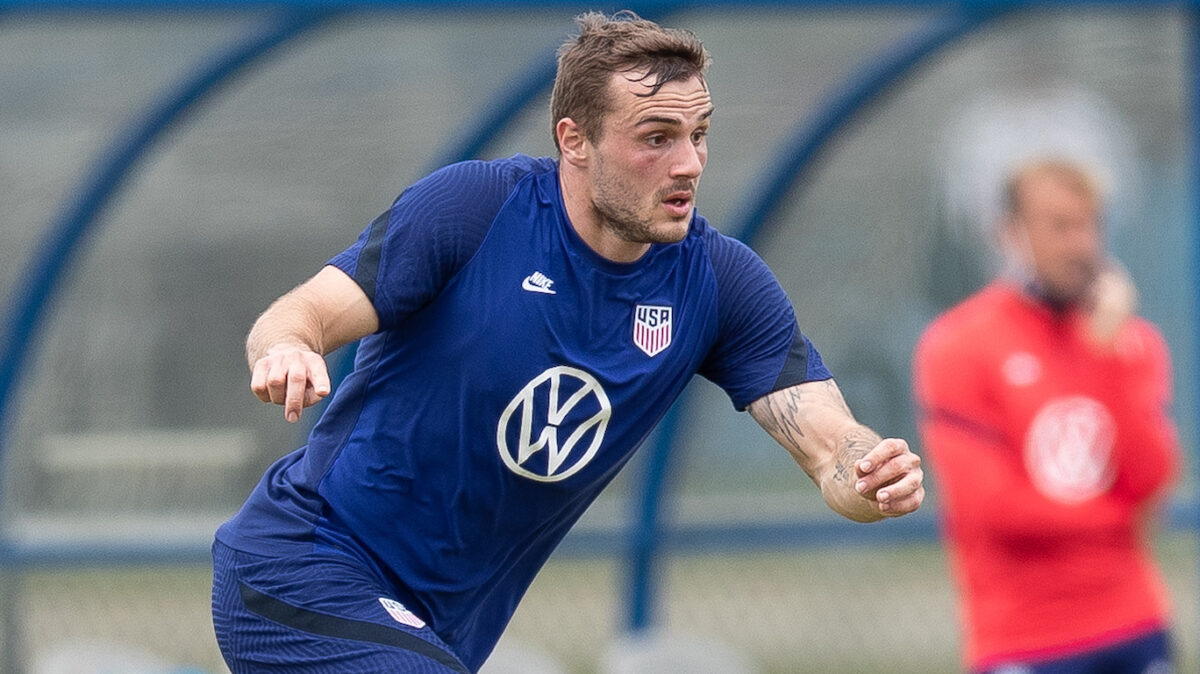 Jordan Morris has waited more than two years to represent the U.S. men’s national team again and now after a grueling time on the sidelines, the Seattle Sounders star will have the chance to do so in the final match of the 2021 calendar year.

Morris is back in the USMNT picture for the first time since November 2019, looking to end his year on a high note in the team’s December 18th friendly vs. Bosnia-Herzegovina in California. The Seattle Sounders winger comes into camp with three MLS appearances under his belt this fall, including a 103 minute outing against Real Salt Lake in the MLS Cup Playoffs.

After fighting his way back from the second serious knee injury of his career, Morris is grateful to represent the national team once again.

“It’s been a long year for myself personally and watching a lot of games on TV and from the sidelines, it was frustrating and disappointing,” Morris said in a conference call Monday with reporters. “Overall it’s been great to be back on the field and be back with a great group of guys again and to see everyone.

“I’m nine months out from my surgery so I was able to get back onto the field a little bit sooner than expected,” Morris said. “I think the playoff game I was able to play over 100 minutes so I feel the work I put in during my recovery process really helped with the fitness side of things. It’s awesome to be here and training in such a competitive environment, I think it will only help me with this last game of the year. There’s still some work to do, but overall happy with where I am at.”

Morris, 26, returned to action with the Sounders in November, nine months after suffering a torn ACL while on loan with English second-tier side Swansea City. The versatile forward totaled 75 minutes of action in the Sounders final two regular season matches before starting in an eventual 6-5 penalty shootout loss to Real Salt Lake at Lumen Field.

Now the veteran winger comes into camp as one of the experienced faces in Gregg Berhalter’s squad, sitting alongside Gyasi Zardes and Kellyn Acosta with the most caps earned in the 26-player roster. Morris has been forced to watch the USMNT lift trophies in both the Concacaf Nations League and Gold Cup, while also posting a 4-1-3 record through its opening eight World Cup Qualifiers so far.

Although he hasn’t been able to play a part for the USMNT over the past two years — Seattle’s run to the 2020 MLS Cup final kept him from taking part in games in 2020 — Morris is excited about how far the team has come along in his absence.

“It’s been great for the team so far, sitting in a good spot right now through the matches played, with every qualifying match being different,” Morris said. “There have been a lot of tough environments, but the team has gotten good results, so I think everyone is pretty happy with where we are at in qualifying.

“Watching from afar it was difficult not being there with the guys, but I was very happy to tune in and see them get the results they did,” Morris said. “For my recovery it was about being ready to go for next year and to get back to doing what I normally do which is stretch teams and getting behind the lines in the attacking half. I’m looking forward to continue working at it this camp.”

Morris’ lengthy time away from the USMNT makes it easy to forget that he has established himself as a prominent starter on the wing in Berhalter’s attack before his two-year absence. He played a key role in the Americans winning their Concacaf Nations League group stage to secure a place in the finals, which the USMNT eventually won.

Morris will be joined by several new faces in the USMNT attacking front this camp, providing a new opportunity for the forward to gel with some of the exciting young talent in the pool. Caden Clark, Cade Cowell, Cole Bassett, and Taylor Booth all come into December’s camp looking to earn their first senior caps for the national team after impressing with their clubs, whether it be in MLS or in Europe.

With plenty of new players looking to impress Berhalter and his coaching staff, Morris will hope to get back doing what he does best, taking on defenders and making the most of his offensive chances. Morris was one of the USMNT’s top offensive weapons during 2019, contributing five goals and seven assists in 14 combined appearances.

No matter what position he ends up in, Morris is ready to go ahead of a busy 2022 for the national team.

“There’s a lot of good, young talent here and it’s really exciting to see the growth of the pool,” Morris said. “I’m really looking forward to working with some of the new players and working alongside them. It’s always fun when you go head-to-head with someone in MLS, then here at camp, so it’s definitely exciting. There’s a lot of great players and I think it’s going to be a really good camp.

“I haven’t had many conversations with Gregg this camp, but I’m happy to play wherever the team needs me, whether it’s the Sounders or the National Team,” Morris said. “With the Sounders I was utilized a little bit of both out wide and up front when I came back into action this year. I’m grateful and happy to be back so wherever I am asked to play I’m going to do it for the good of the team.”