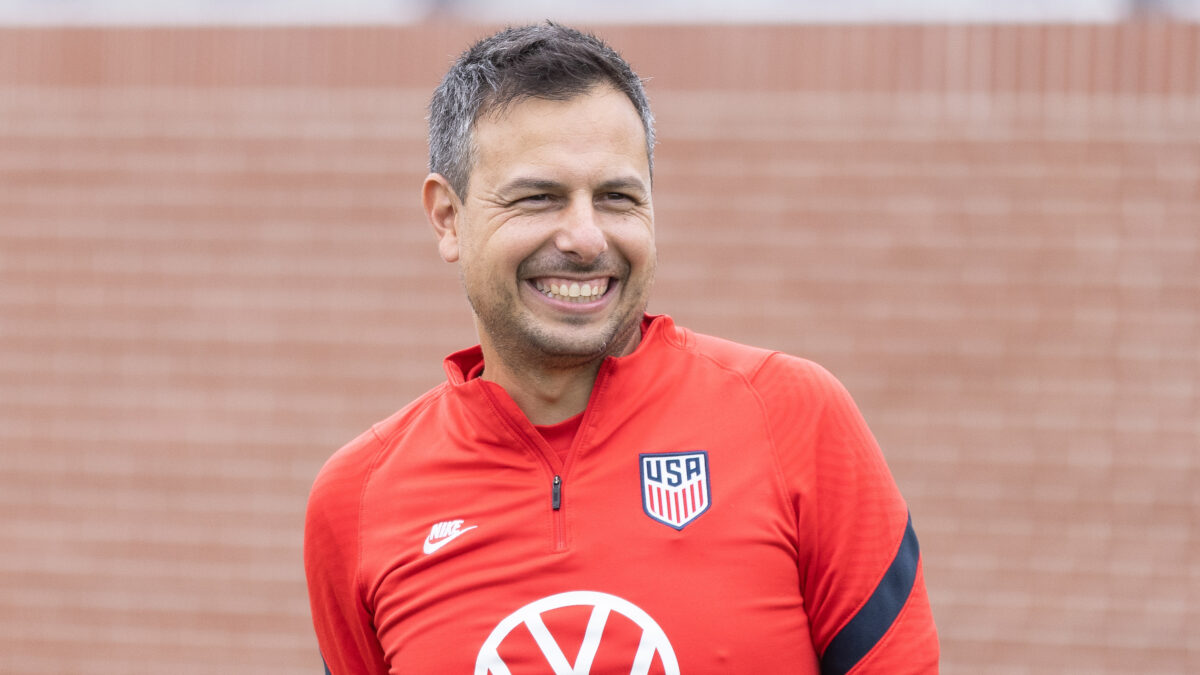 Estevez steps in as the replacement for Luchi Gonzalez, who was fired as FC Dallas head coach late in the 2021 season.

The 41-year-old Estevez previously served as an assistant under U.S. Men’s National Team head coach Gregg Berhalter with the USMNT and during Berhalter’s time with the Columbus Crew.

A native of Spain, Estevez has mainly managed in his native country, serving as interim manager of La Liga side Valencia in 2013 after previously being the head coach of the Valencia B side.

Estevez was key in the USMNT’s recruitment of Valencia midfielder Yunus Musah, who was a dual national eligible to play for England and Ghana, but ultimately chose to represent the United States and credited his relationship with Estevez with helping that decision.

Here are some more news items from around MLS:

Seattle Sounders star Raul Ruidiaz is drawing major transfer interest from multiple Mexican powers, with Cruz Azul and Club America emerging as potential destinations according to a report by TUDN.

The 31-year-old Peruvian striker is coming off an MLS Best XI season, with Ruidiaz scoring 17 goals despite being sidelined late in the season by injury.

Ruidiaz is a key cog in the Sounders attack, but talks of an extension have hit a snag in recent weeks and the Sounders now face the possibility of having to replace their second all-time leading scorer.

Lucas Zelarayan has been an integral part of the Columbus Crew attack since arriving in MLS and his time with the 2020 MLS Cup Champions will continue as the 29 year-old Designated Player signed a three year extension, the Crew announced Thursday.

The extension which will maintain Zelarayan’s status as a Designated Player, runs until at least 2024 with a club option for an additional year.

Zelarayan was a massive part of the Crew winning the 2020 MLS Cup, scoring a brace in the 3-0 win over the Seattle Sounders and earning match MVP Honors.

He also received the MLS Newcomer of the Year award for the 2019-2020 season and in 53 appearances, Zelarayan has 21 goals and 19 assists.

Born in Cordoba, Argentina, Zelarayan made his debut for the Armenian national team in October and has earned four caps after gaining citizenship through his father.

The Philadelphia Union have been without Cameroon International right-back Olivier Mbaizo for their first two playoff games, but the Union will get a boost for the Eastern Conference matchup against NYCFC as Mbaizo returned to training Wednesday.

Prior to being sidelined due to health and safety protocols, Mbaizo has been a locked on starter for head coach Jim Curtin at right back, starting 28 matches and recording four assists in 2021.

Union head coach Jim Curtin turned to Alvas Powell against the New York Red Bulls and Nashville SC, but the Union will hope Mbaizo is fit enough to help slow down a strong NYCFC attack.

Michael Barrios was a livewire for the Colorado Rapids in 2021 and will be returning in 2022.

The Rapids announced Thursday that Barrios signed a one-year extension, which also comes with an option for 2023. Barrios, 31, registered eight goals and six assists in his first season with the club after arriving from FC Dallas last offseason.

“Mikey demonstrated his qualities from his first day with the group and quickly became an important piece to our success in 2021,” Rapids executive VP and GM Pádraig Smith said. “We’re delighted to extend his time with the club and look forward to seeing his continued impact on the pitch as we look to build on a historic season.”

Barrios previously spent six seasons in Dallas and has recorded 39 goals and 51 assists across 212 total MLS regular-season appearances. The veteran winger helped the Rapids claim the No. 1 seed in the Western Conference this season before being eliminated by the Portland Timbers on Thanksgiving.

Jonathan Bornstein is returning for another season with the Chicago Fire, the club announced Thursday. Bornstein 37, made 25 starts for the Fire last season and is one of the first moves under new head coach Ezra Hendrickson.

Prior to joining the Fire in 2019, Bornstein spent time in Liga MX and the Israeli Premier League. Bornstein was also been capped 38 times by the USMNT between 2007 and 2011.

Minnesota United homegrown player Patrick Weah will be sidelined for most of the 2022 MLS season after the 17 year-old underwent ACL reconstruction surgery, the team announced Thursday.

Weah appeared in 2 games for Minnesota United this season and was subsequently sent on loan to Sacramento Republic FC where also he appeared in 2 matches.

NYCFC striker and reigning MLS Golden Boot winner Taty Castellanos was issued a fine by the MLS Disciplinary Committee for not leaving the field in a timely manner after being issued a red card in NYCFC’S Eastern Conference semifinal playoff win vs. the New England Revolution on Tuesday.