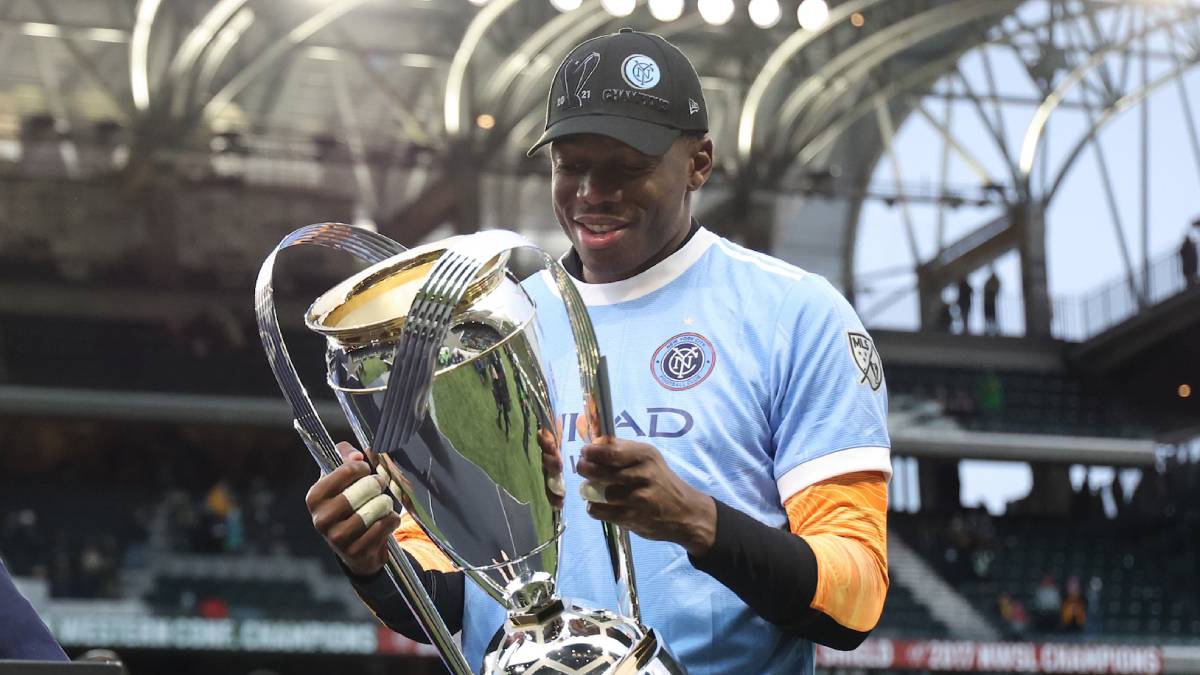 Whether it was ensuring his team didn’t fold after giving up a gut-punch of a last-second equalizer, or making two more penalty shootout saves to add to his growing collection, Sean Johnson was the epitome of the perfect captain in New York City FC’s MLS Cup triumph on Saturday.

The veteran goalkeeper rallied his teammates following Felipe Mora’s late goal, which forced overtime in the 2021 MLS Cup final, then he stopped the Portland Timbers’ first two penalties, denying Mora and Diego Valeri, to set the tone in an eventual NYCFC shootout victory.

Johnson’s heroics earned him Man of the Match honors, giving him another piece of silverware to go with the MLS Cup trophy he lifted as captain in his 11th, and best season as a professional.

“For me, he’s the big, big winner.” NYCFC head coach Ronny Deila said of Johnson. “He wins this game.”

The 32-year old has transformed into a captain in 2021 and his meaning to the team goes beyond what was on display Saturday.

“The way he speaks for the team, the way he goes in front every day in training to bring people together. And also when the big moments (come), how he is a stand out time after time. He’s been a winner. A real winner, and is a leader and captain that the whole club should be really really proud of,”

Johnson’s leadership was never more evident than after Portland’s equalizer, when the the NYCFC gathered his teammates and delivered a much-needed message to his shaken team.

“Just wanted to make sure that we stayed level,” Johnson said. “We’ve been in that position before. I told the guys we have the experience, not to panic, not to get down on ourselves because there’s more of an opportunity to go forward and win the game. And no one said it would be easy. It’s been difficult, but that’s how it should be to win a championship,”

NYCFC’s challenging playoff run — which included two penalty shootouts and a difficult East final win against the Philadelphia Union — was a fitting gauntlet to run for a team that had to shake off a brutal slump that threatened NYCFC’s season. Ronny Deila’s men turned things around with a late-season surge that culminated with a nine-match unbeaten run capped by Saturday’s victory.

“It feels unbelievable. To be able to call ourselves champions, you know, what a ride … this journey was just crazy this year,” Johnson said. “So many ups, so many downs. And we just talked amongst ourselves before the game (about) how it’s a massive opportunity to make it all worth it, and this is what we live for, these moments,”

Johnson was instrumental in helping NYCFC turn things around, and overcome the losses of Anton Tinnerholm and Keaton Parks to injury, as he found his voice as the team’s unquestioned leader, and backed up his words with actions in the form of big save after big save.

“I think it was tough for Sean in the first period, to be a captain,” Deila said. “I think he thought a lot about it. How are we going to act? What’s important? But the way he has stepped in the last three months has been unbelievable.”