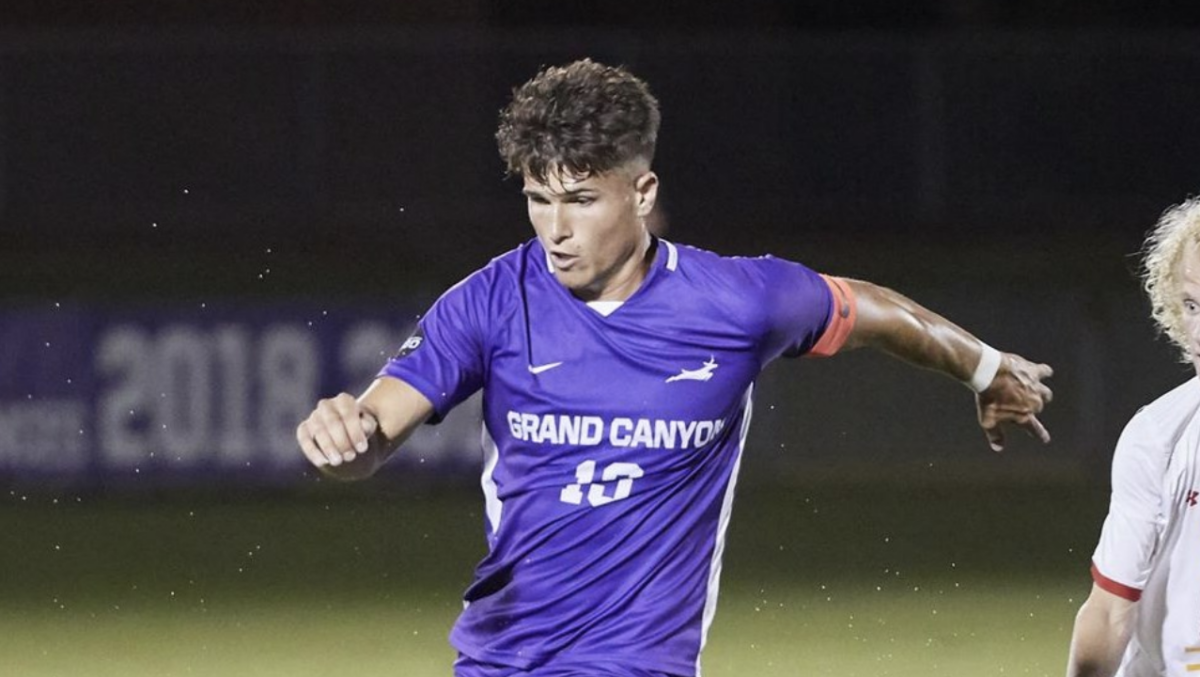 Justin Rasmussen didn’t arrive at Grand Canyon University as a well-known name among professional scouts, but after five years of Division 1 soccer, experiences with two established head coaches with ties to Major League Soccer, and plenty of support behind him, the versatile player is ready to show he can make a successful jump to the pro ranks.

Rasmussen is preparing for Tuesday’s 2022 MLS Draft, looking to take what he has learned from the college level and build off of that with a professional franchise. The Las Vegas native recently concluded a five-year career with the Antelopes in the Western Athletic Conference (WAC), registering career-highs in appearances (20), goals (9), and assists (6) under first-year head coach and former MLS player Leonard Griffin.

Rasmussen was moved to a new role under Griffin, seeing ample time as a left wingback in a 3-5-2 formation, a change from his traditional midfield role under legendary collegiate coach and former FC Dallas head coach Schellas Hyndman. The move was one that Rasmussen took full advantage of, one that should benefit him for his future in MLS.

“It was definitely a bit of a change, but I consider myself a versatile player and one that was ready for the opportunity,” Rasmussen told SBI Soccer. “For my first four years I was mainly more of an attacking player, but I feel I had an easy transition to the change. I think it was a good thing in a way because it only got me more prepared for what’s to come in MLS and I think being versatile will only help me earn more chances to play at the next level.”

“We felt as a coaching staff that Justin had a better chance at the next level as an outside back and we already knew he could run for days,” Griffin told SBI. “He wasn’t just able to get upfield and be a threat in the box, but he added that defensive ability to his game and it was really cool to see him grow into that as a senior. As a former left back myself, I was very particular so I always tried my best to help him with any questions he had.”

Rasmussen not only excelled during his senior year individually, but helped Grand Canyon post a 15-4-1 record in Griffin’s first season at the helm. The Antelopes fell just short of a WAC Division title, losing 4-3 in penalty kicks to Seattle University in the Conference Championship before also being ousted in the first round of the NCAA Tournament by the University of Denver.

Now with his collegiate career behind him, Rasmussen has continued to focus on his role at the next level. A diehard Liverpool fan, the former Bishop Gorman graduate continues to prepare for the MLS Draft, while also watching film on some of his favorite players to sport the red and white of the Merseyside club.

“It’s funny to say, but I do watch a lot of Trent Alexander-Arnold and Andy Robertson because I feel they are so good at doing what they do on the field,” Rasmussen said. “Both of them make it look so easy on the field and Robertson plays a similar role to what I did at GCU. Of course it helps they play for the team I root for, but I feel to get close to that level someday, the best thing to do is scout and try doing what they do on a weekly basis.”

Rasmussen’s early career at GCU allowed him to pick the brain of Hyndman, a head coach with over 35 years of experience at the college level and six years of MLS experience with FC Dallas. The Macao native served as head coach of GCU from 2015-2020, leading the Antelopes to a WAC Championship in 2018 and coaching the youthful Rasmussen for four seasons.

In addition to his relationship with Hyndman, Rasmussen was also able to see the U.S. men’s national team up close at his college campus during Gregg Berhalter’s first camp at USMNT head coach. The USMNT opened its 2019 January camp at GCU’s facilities, providing an opportunity for the Antelopes’ players to learn from some of the rising talents within U.S. Soccer.

“Both of my experiences with Schellas and Leonard have provided great moments for me as a player,” Rasmussen said. “Schellas is a guy who I still connect with often and am always picking his brain for new things. He was a well-drilled coach and I think helped me become a man when I arrived here. Leonard had plenty of experience in MLS and has been a great friend to me during my last year here. I can’t thank both of them enough for the impact they’ve left on me.

“When the USMNT comes into your backyard, it’s always going to be a fun time and it was just really neat to see Gregg begin his ideas with the team” Rasmussen added. “As a player, you get excited watching them practice and see how easily they go through the motions and make everything crisp. It’s helped raise my game and want to be on the same level as that someday.”

Rasmussen’s future as an MLS player is getting set to kick off with the Nevada-based player eager for an opportunity with any of the 28 franchises in the league. After a strong end to his collegiate career at a growing program at GCU, the versatile midfielder/defender not only backs himself to keep developing on the field, but has the backing of Griffin to excel at the next level.

“He’s grinded his way to where he is today,” Griffin said. “If a head coach wants him to play a new position in MLS, I’m sure you will see him put his head down and work hard to make that part of his game. I see a lot of similarities between him and Tristan Blackmon or Chase Gasper, both guys that are hardworking defenders and have great engines in the league. All three are athletic and you need that as a pro player.”